The "Plasma Gun" weapon sprite is actually the front end of a dart-firing Nerf M60 replica. 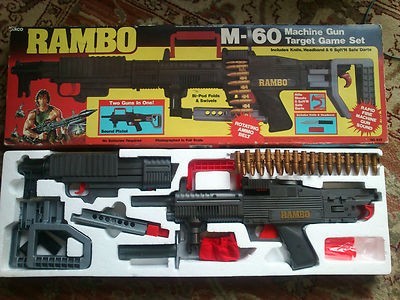 Where said part came from 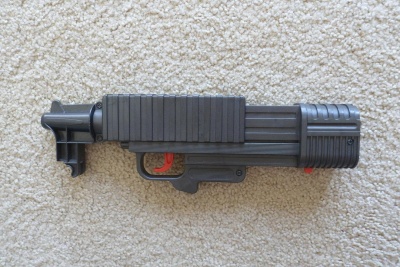 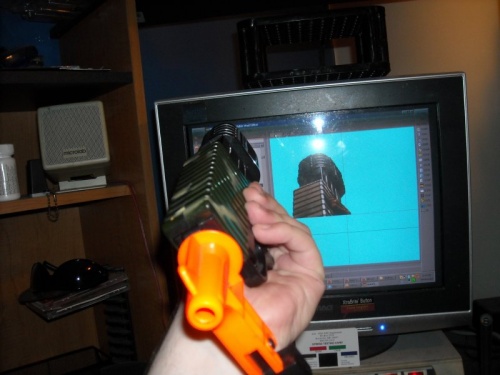 As visible here, the part was apparently painted gold before photography. 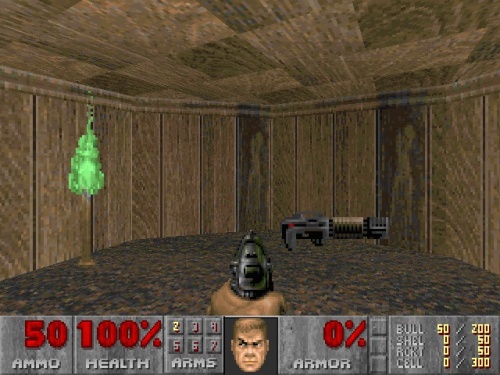 The world model, which also seems to use the M60 part in its design (as it should, really). 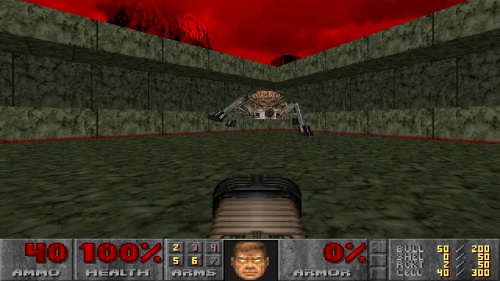 A cheating Doom Guy goes up against the Spider Mastermind with the Plasma Rifle drawn.

The "BFG 9000" weapon was created from digitized photographs of a toy laser pistol named the "Roargun" while also utilizing some elements from the aforementioned Rambo M60 toy (namely the front black muzzle looking thing). 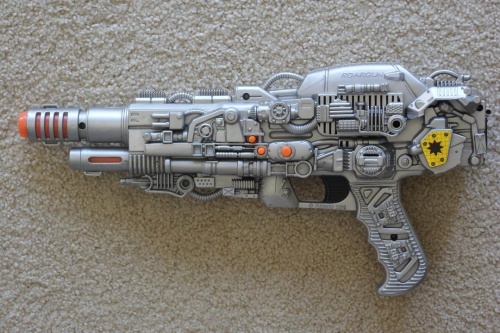 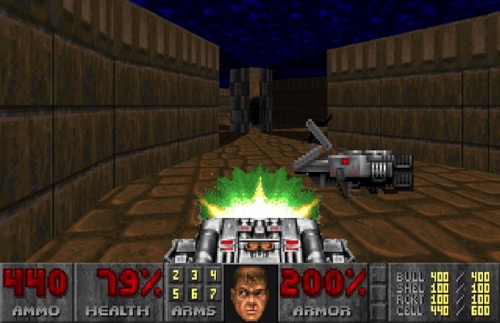 The BFG in action next to its pickup graphic. Note the black muzzle device which appears to be sourced from the Rambo M60 toy.

The chainsaw sprites are digitized from photographs of a real chainsaw, a McCulloch Eager Beaver that belonged to id Software co-founder Tom Hall's girlfriend. The out-of-place nature of a chainsaw in outer space, especially a model made for cutting wood, is joked about in both Doom 3 and the 2016 Doom. A staple of the franchise, the chainsaw has appeared in every game as well as in both film adaptions. The Doom 64 chainsaw even has two blades, as does the one that appeared in the 2005 film. 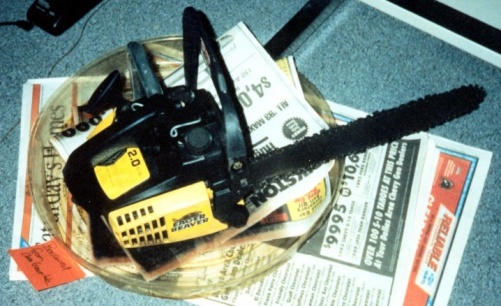 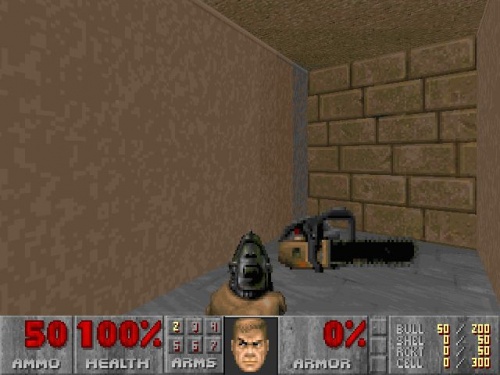 "A chainsaw! Go find some meat!" 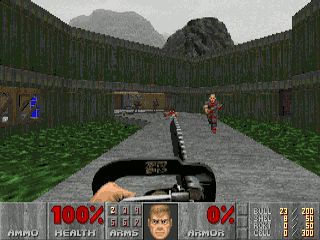 Doomguy prepares to eviscerate a possessed Marine with the chainsaw.

Hacx, an officially licensed and commercially released total conversion for Doom II features an Uzi submachine gun as an answer to the Doom/Doom II Chaingun weapon. Notably, whereas the Chaingun would fire two rounds at the click of a button, the Uzi fires four. Whenever the player stops firing, the player character will pause to reload the Uzi. However, as there is no real magazine/round count mechanic, this is more of an aesthetic choice. No matter how many rounds are fired, whether it's ten or an entire payload of two-hundred, the weapon only reloads when the players releases the trigger. 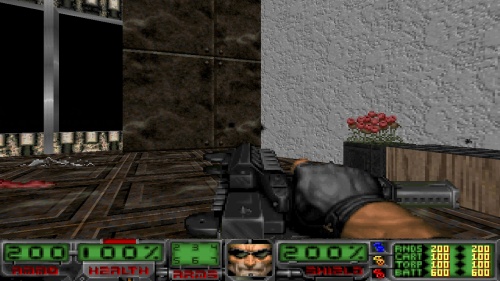 The Hacx protagonist Danny Evanger holds his Uzi "gangsta-style" in the game's first level. This is probably the most realistic looking real-world firearm in any Doom release. 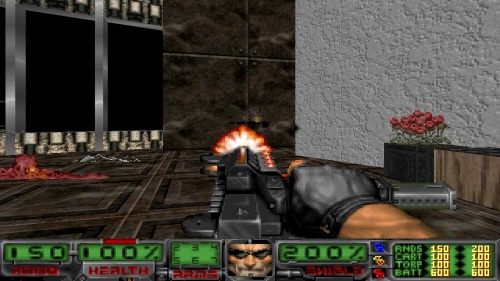 For some reason flames erupt from the handguard when firing the Uzi. 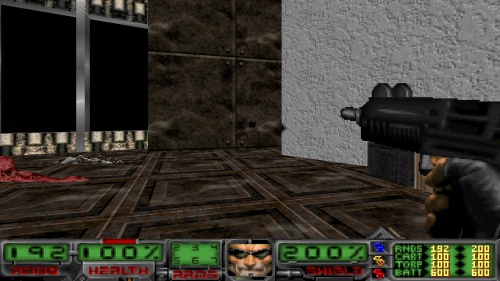 As mentioned before, the Uzi will reload as soon as the player stops firing, regardless of how many rounds were spent. Note that the magazine seems to have a bullet drawn into it. Even modern games forget to add this detail sometimes. 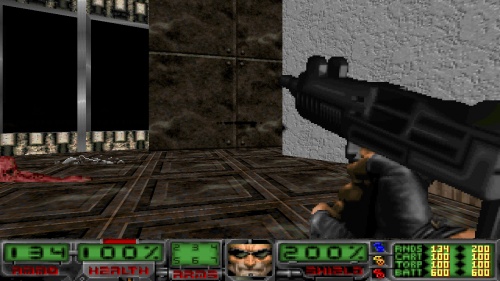 Evanger pushes the mag in, giving us the full profile of the Uzi. However, it appears the ejection port was put on the wrong side of the gun. Whoops. Note the visible folding stock on the rear of the gun, though.

As I recall, the pistol was also a cap gun, probably a Beretta replica. Romero says they picked the pistol and the Dakota up from the local Toys R Us. Still, given they were actually digitised from photographs of replica weapons, I think that's just enough reason to keep the page to point out the weapons themselves were fakes. Though I think that rocket launcher can go, since "stunted little RPG-7 crackbaby" isn't going to make anyone think it's a real gun. Plasma gun is interesting, I wasn't aware they had a physical prop for that one. Evil Tim 04:27, 28 March 2012 (CDT)

It is from a toy M-60. I had one as a kid. And it isn't cut off of the front of the handguard. The front detached and became a "dart mortar using the plastic bipod. -insertjjs

I just looked at the page history on the page. This page started as the page for the film (and is probably one of the oldest on the site.) The creator of the current page didn't use the move tool, instead going with the ham-fisted cut and paste onto a new page approach. All of the links for the film are now leading to the disambiguation page. --Funkychinaman 09:50, 28 March 2012 (CDT)

Yeah, I saw that too. I suggest destroying this page and moving back the film to "Doom", (Then the disambiguation page can go also.) and the links will be fixed.
Maybe it will be wise to create a "Doom Video Game Series" page, (like the Devil May Cry Series) and combine every Doom game there. (IIRC, there is a double barrel shotgun in Resurrection of Evil.) Of course without the chainsaw and BFG... --bozitojugg3rn4ut 10:45, 28 March 2012 (CDT)

I don't think it's worth it for just one gun that appeared in an add-on pack. The chainsaw I'll move to a trivia heading when I rework the page, since we do know the precise model of chainsaw used. Evil Tim 01:51, 29 March 2012 (CDT)

So can someone explain to me why this has a page and not Doom 3? Yes i saw that its not in the rules and everything but why? Please give me an explanation. Thanks.DRC92 (talk)

Hey, the nerds at Doomworld posted some sprites from the Doom Alphas. The first set of guns in the linked post are some rifles and an SMG weapon, and the second row are the redesigns, followed by the final designs. The shotgun is the same prop through and through, it's just that the final went through a lot of post. I'm curious as to what those other rifles could have been based off of. Note that in the second row, the fourth gun is the second gun with some added visual flair. In the first row the first two guns are the same, except that the first has a detachable bayonet. Just some interesting extras, really. --Clonehunter (talk) 18:26, 17 November 2014 (EST)