I am pretty sure it was not a recoiless rifle used to hit the LAPD APC in the movie. If I remember the scene correctly it seemed more like a bazooka a la the USMC SMAW (the Israeli B-300) where the missle/rocket is in a separate tube screwed into the rear of the launcher. In addition the launcher itself does not have the "crank" to close the rear hatch as is the case with most recoiless weapons. Finally, the reloads shown in the movie do not have the perforated shielding common to most/all recoiless rifle rounds.

I don't have this on DVD but I swear at least one of them is a chopped down HK94 and not an A3. During the elavator scene, you can see it is missing a paddle mag release and 3 lugs on the barrel end. If someone could cap that, it would be much appreciated. -GM

They're all chopped-down HK94s, every one of them, just like in Lethal Weapon and Predator. I have this movie on DVD, so I'll try to screencap the MP5s when I'm back at my apartment tomorrow.

Thanks, I've been meaning to redo the page. I especially wanted to get rid of the screengrabs taken from Youtube videos, those didn't look too great. Anyway, now everyone can say IMFDB has completed pages of every film in the Die Hard series.--Alienqueen11 05:26, 16 November 2008 (UTC)

Heckler & Koch never made a stainless version of their P7, it´s either nickel plated or hard chromed. Keep up the good work.

I've taken a look around and I can't see any recoilless with a tube that looks like that one at the back. Thing is, there are some recoilless rifles with muzzles that look like that; if it's not a prop, it looks like they mounted it backwards. Dongs 07:05, 21 June 2009 (UTC)

if u look at the Walther used by karl, the silncer looks alot smaller than the one on the picture of the silenced walther.

Beretta taped to Willis' back

First off, I love "Die Hard". Always have, ever since I first saw it 20 years ago. But I can't help but doubt that cheap tape would hold a Beretta. That pistol is at about 2 lbs.

Don't you guys outthere think, filmmakers tend to forget about the weight of weapons too often? In many movies, people can be seen throwing and catching guns, as if they were baseballs. And how many times have we seen guns hidden in clothing and even in hats?! Even a small handgun like a Browning Baby or one of the small Berettas are at least 400 g. That's the weight of a beer can. Ever tried to hide a beer can under your hat? In one of his movies, I remember seeing Schwarzenegger carrying his Beretta 92 in one of his socks! Don't you think, it would be a hell of a job to walk that way? What dou you think about all these almost weightless guns in many movies? --Lastgunslinger 14:13, 31 October 2009 (UTC)

In the filmmaker's defense, he only had two rounds in the mag, instead of a full mag. That has to count for something, right? --Funkychinaman 03:28, 3 March 2010 (UTC)

I love that we have a film loaded with unrealistic stuff and people pick out the gun related material to hack on. I would suggest you go home tonight and try taping one of your handguns to your back with some standard issue packing tape. The shiny brown kind. I bet it works just fine. I would be more compelled to ask how the tape stuck to a man sweating and bleeding so badly!

The Arnold flick where he had a beretta in his sock was Last Action Hero, and it was a parody of action films within a film of exactly what you are talking about here.

- He also did it in Kindegarten Cop.

No, the only movie Arnold had a full sized Beretta in his sock was Kindergarten Cop, the one he had in Last Action Hero was a Colt Mustang. Kornflakes89 20:39, 29 April 2011 (CDT)

What's the story on the five vs six shots from Powell at the end? I was expecting to see some explanation that there was a discrepancy between how many shots are seen verses heard or something like that, but after reading to the end it looks like two editors can't agree on who is correct. -ReverendTed 20:02, 6 November 2009 (UTC)

Hey Lastgunslinger that movie you're talking about with Arnold and the beretta in his sock is Kindergarten Cop and by the way he actually had the gun in an ankle holster I believe. Still doubtful he could fit a full size beretta in a ankle holster that would be a little awkward

The M16 that the SWAT guy has (the one going through the thorn bushes) looks like one of those fake MGC M16s. It looks like it has the nut where the forward assist should be. What do you think? --Funkychinaman 03:27, 3 March 2010 (UTC)

Did you know in every Die Hard movie, there is at least one German made gun that is used by a bad guy. Did you know that H&K are German and have very popular guns therefore they are used alot?

- Attitude and language like that aren't exactly tolerated around here, bud. You better watch yourself. StanTheMan 04:01, 17 September 2010 (UTC)

Maybe we should delete this section, the bad attitude of the second poster kind of tarnishes the site. -Anonymous

Seeing as he got banhammered by MPM08, you could leave it as warning to others. Kinda' like sticking the head of a criminal on a pike outside the castle gates, if you will.--PistolJunkie 18:59, 17 September 2010 (UTC)

- That dude's posted other similarly crummy comments elsewhere and even deleted sections off pages that I had to undo. But I didn't realize that it was the same dude 'til later. Oh well, good riddance anyway. StanTheMan 23:55, 17 September 2010 (UTC)

What I thought about all the Die Hard movies

This is what I thought about all the Die Hard movies.

First: Excellent and probably the best of the series.

Second: It was OK.

Fourth: It was good.

Is it just me or does the Beretta that Willis is holding on the front cover of the film look like a 92SB because the trigger gaurd looks rounded.

- It's still a 92F. You can just make out the semi-squared re-curve on the forward-bottom part of the trigger guard under his right index finger. StanTheMan 18:13, 2 May 2010 (UTC)

Though it does look like an 92SB, his finger is covering up the squared area. It also has the extended slide release, just like the screen used gun pic we have.--Predator20 15:58, 13 May 2011 (CDT) 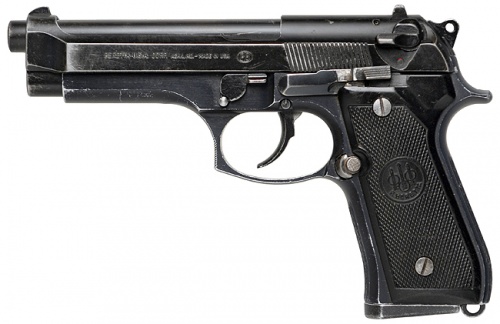 Beretta 92F (9x19mm) used by Bruce Willis in Die Hard. This is the screen-used gun from the film; note the extended mag release and slide release, which were modifications made specifically for Bruce Willis.

Irregardless of his finger covering the trigger guard it's still obvious that is an SB trigger guard if you look it has the slopping shape. I've got the poster on my wall and it's definitely not a 92F trigger guard. --cool-breeze 16:49, 6 July 2011 (CDT)

i just watched the film again and i realised that theres 13 terrorists and not 12.

- Are you sure? I thought it only was 12. In any case, if it really is 13 best I can figure is Clarence Gilyard's character isn't counted as he isn't really one of the armed 'terrorists' and spends most of his time in the film breaking into the Nakatomi vault. StanTheMan 03:31, 3 May 2010 (UTC)

It's 12 + Hans. McClane counts 9 to Officer Powell after he kills Tony, Marco and his friend Heinrich. He kills 2 terrorists who were manning the SMAW, then 2 in the computer room (That's 5 left). Al Leong gets killed on the roof and the terrorist that looks like Huey Lewis gets shot in the head (that's 3 left). (Clarence Gilyard) gets knocked out by Argyle the chauffeur and another terrorist holding the bearer bonds gets knocked out by McClane. Last of course, is Karl. --Ben41 05:22, 12 May 2010 (UTC)

he never acctualy see them all together . and also , i dont think he ever actualy see clarence gilyard's or the asian guy he kills on the roof . simmons 8492

I believe the optic on his rifle is an AN-PVS 3, not an AN-PVS 2 as listed.

Got a couple of Questions. (1) Can a Police Officer actually carry a Gun in his Holster like that on an Airplane? What if a Passenger tried to subdue the Officer and Grab the Gun. Shouldn't it be secured in a Suitcase under the Plane. (2) I know that the Beretta 92F was introduced to the LAPD in 1988. Was this purhaps inspired by movies like Lethal Weapon & Die Hard? Were any other Police Departments issued Beretta 92F's before the LAPD?

My Explaination. 1. Back in the day police officers WERE able to carry on to a plane. Now they have to check their firearms. Air Marshals are the only ones who can carry on a plane. 2. The Beretta was probably issued because it was heavily promoted, the military used them, and it accomplished what they wanted for less than competing designs. -Ranger01 17:32, 22 June 2010 (UTC)

Any law enforcement officer can carry weapons on a plane if they get clearance.

Trivia- In every Die Hard movie, John has killed someone by firing a hail of ammo through something at them. The table, in Die Hard, the air duct vent cover in Die Hard 2, and the truck doors in DH w/a Vengeance and Live Free or Die Hard.

I don't know what that weapon is, but I do know it isn't a SMAW-D. The M141 BDM, or SMAW-D was the McDonnel-Douglas candidate chosen over an AT-4 variant in 1996, eight years before the movie was made. The chance of a movie director or weapons consultant even KNOWING about it, much less a group of terrorists/thieves getting their hands on one is so small as to be infinetisimal.

"The firearms used in the film are, as in most action films, real firearms modified to function with blanks. Although modern small arms ammunition is intended to have minimum muzzle flash, director John McTiernan wanted vivid, "exaggerated realism" in the muzzle flashes. Weapons specialist Michael Papac hand fabricated some blanks that were so powerful that the standard firearms modifications weren't workable. Papac had to specially modify the firearms involved. Special effects coordinator Al Di Sarro said of these blanks that 'in the world of blanks, there are loads that are not so loud and loads that are deafening', and these were deafening. These blanks did cause some cast members, notably Alan Rickman, to flinch. Furthermore, normally most sound effects come from a studio library of sound effects. Sound designer Richard Shorr didn't want to use these clips as modern sound equipment would show their age, as some of them were recorded in the 1950s. To resolve this and further the "exaggerated realism", the sound crew took the appropriate firearms to a firing range in Texas and recorded them being fired with live ammunition." --funkychinaman 17:18, 16 September 2010 (UTC)

That attention to detail is admirable. Most movies use stock sound effects even when wildly inappropriate. The worst I can think of is the ending of Pineapple Express which gave M4 Carbines, Micro-Uzis, MP5s, and MP7s all the same sound effects while dubbing the sound of Kalashnikovs with heavy machine gun noise. -Anonymous