The "Daemon 3XB" is a .45 caliber open bolt submachine gun added to the game with the Operation Absolute Zero update. 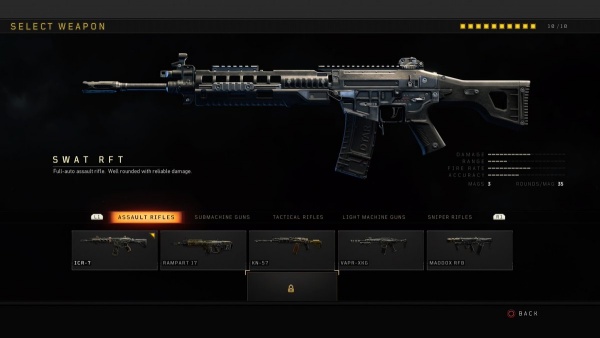 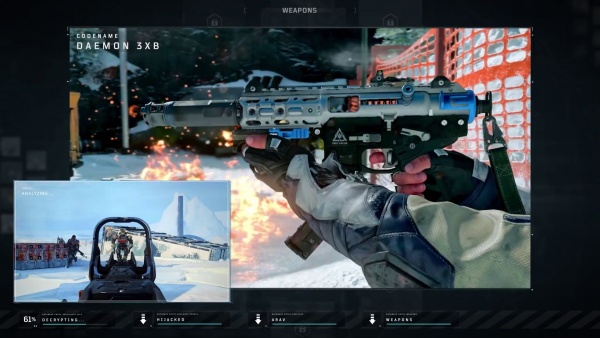 The "Drakon", a WA 2000 / FG 42 based sniper rifle from Black Ops III, was seen in a trailer for the Zombies map "IX". It doesn't appear in the final game, however. 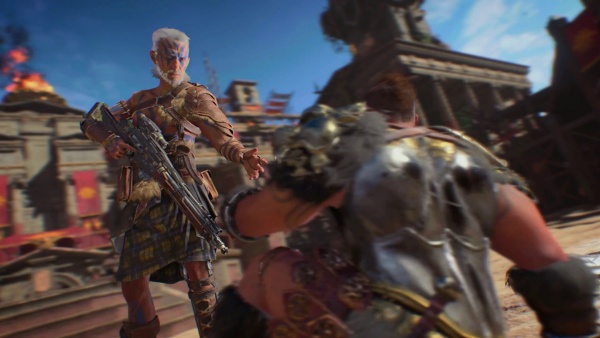 The "Drakon" being held by Stanton.

The "combat knife" is inspired by the Rambo 3 knife.

I wouldn't say the Rampart resembles the SCAR. In fact, it looks like the R101 Carbine. You know, that assault rifle from Titanfall? It even has the angled magwell and magazine. Talk about going full circle. The Titan is clearly the LSAT once more, the HB50 is a left-handed straight-pull bolt-action Barrett (probably based on the 98 Bravo) and that Swordfish rifle is a vaguely modified Vektor CR-21, I'm sure of it. Oh yes, and the Cordite SMG...honestly that resembles the Bal-27 from Advanced Warfare, of all things.--Gunmaster2011 (talk) 19:29, 23 May 2018 (EDT)

The one in her right hand is a mutant Peacemaker, the one in her left is indeed the New Army, very likely the one from Black Ops II. I mean it'd made sense for them to reuse the model, as they only used it once, but poster weapons rarely make it into the final map; same as with the AK on the Call of the Dead poster, or the M1911 on the Shadows of Evil poster. Also she's seen dual-weilding what appear to be Webleys in the trailer.--Gunmaster2011 (talk) 19:29, 23 May 2018 (EDT)

What gun is this? It's a Old Lever Action 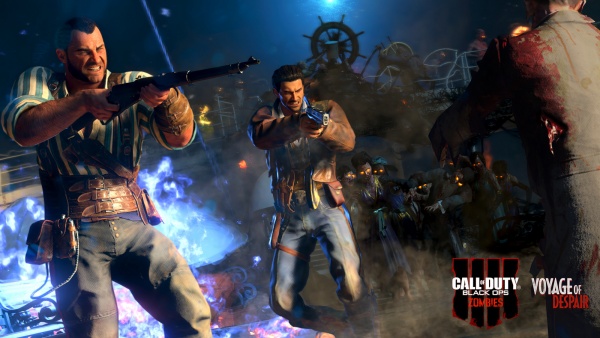 I tried to do my best with these weapons.

I was working on these weapons, and I figure something out.

The Titan is similar to the LSAT

The Auger DMR is similar to the SVD Dragunov

The Espadon is similar to the Famas

The Paladin HB50 is similar to the Barrett .50cal

The Koshka is similar to the SVU-AS

The Strife is similar to the FNP-45

The Rampart 17 is similar to the SCAR-H

The Vapr-XMG is similar to the M4 Carbine, M4 CQBR or the CAR-15 (I guess it's trying to be the Commando from Black Ops)

The Spitfire is similar to the Jian She Type-05

The Mog 12 is similar to the Ithaca 37 Stakeout

The Hellion Salvo is similar to the MAAWS (I'm not sure)

The only IDs that I agree with are the "Paladin HB50" (a Barrett indeed, likely resembling the M107A1, even though the fire mode is different), the SG12 (AA-12 CQB), and to some extend the "Spitfire" (a Jianshe, but obviously the JS 9mm railed version, not the Type 05). I'm not sure about the "MOG 12", but most of your other suggestions are way too far-fetched; seriously, how on earth does the "Saug 9mm" even remotely look like a CBJ-MS? If anything, it looks like one of the pistols (such as the VBR-Belgium PDW) that are sometimes being used as a reference for futuristic CoD handguns. As for others, I can tell that the "ABR 223" looks a bit like a SAR 21, while the Titan is reminiscent of the LSAT. There are two things that you should keep in mind: 1) not literally every weapon in a futuristic video game has to be based on a real particular weapon, and 2) just because a weapon has some AR-like parts doesn't automatically make it an M4/CAR-15 (I'm really stressing on that point, given your non-stop obsession in wanting to find an AR-15 basis in MANY weapons). --Ultimate94ninja (talk) 16:59, 3 August 2018 (EDT)

Okay so were back to heated COD weapon debates. What happened to keeping it friendly? Anyway Auger to me is a mix Of the new russian SVK and older SVD. The KN57 is clearly an AK12. Saug is a VBR with maybe some elements from Steyr SSP Titan is an LSAT. Vapr XMG looks a tad like a honey badger without the suppressor. Haven’t seen Espadon, Maddox or Spitfire so can’t comment. Rampart looks like a deconstructed Scar H mated with Titanfalls rifle.

The Vapr-XKG looks similar to a Custom M4 Carbine or a Custom AR-15. Some people would say it's a Honey Badger, but it looks more like an M4/AR15. The Handguard looks similar to the Elite Force VFC M4 VR16 Calibur Carbine or the Krytac ALPHA M4 CRB. The front Iron Sight looks like the Elite Force VFC M4 VR16 Sight. It also have either a futuristic PDW Stock (which is used for the Honey Badger, but it is also used for the M4 Carbine), or a futuristic AR-15 Battlelink Minimalist Stock. When you add the Stock attachment, it looks similar to a AR-15 DS150 Stock. I was looking up some custom M4's and AR15's. I was stress out, but I figure out. I was looking to deep about this gun.--Treliazz (talk) 01:25, 6 August 2018 (EDT)

Sorry but how is the ABR223 not a Steyr Aug/Thales EF88 combo? It has more in common with either of those rifles than the SAR21. The swordfish seems to be based to the VHS K2 with the handguard/sight combo. Also whilst the ICR in Blops3 was a HK416, the ICR7 seems closer to the ARAK21 series of rifles, especially with the side mounted charging handle.--Forrest1985 (talk) 13:51, 13 October 2018 (EDT)

Hmm... looking at it again, yeah it does have have parts in common with the AUG A2, most notably the top rail (I don't really see anything in common with the Thales, though), but I had the SAR 21 in my mind due to the deeper magwell and the charging handle's location. --Ultimate94ninja (talk) 17:10, 13 October 2018 (EDT)

I did a topic earlier about this gun. The Handguard looks similar to the Elite Force VFC M4 VR16 Calibur Carbine or the Krytac ALPHA M4 CRB. The front Iron Sight looks like the Elite Force VFC M4 VR16 Sight. It also have either a futuristic PDW Stock (which is used for the Honey Badger, but it is also used for the M4 Carbine), or a futuristic AR-15 Battlelink Minimalist Stock. When you add the Stock attachment, it looks similar to a AR-15 DS150 Stock. I was looking up some custom M4's and AR15's. I was stress out, and I was looking to deep about this gun. It could be based on a Custom AR15, or Custom M4. (I'm not saying it because I love M4s or CAR-15s) What is your thoughts about this gun?--Treliazz (talk) 12:50, 16 October 2018 (EDT)

Honestly, I would say it had more in common with the Lynx from MW:R or the Peacekeeper 2 from BLOPS3 than any real M4/AR15. Of course both weapons are loosely based on the Honey badger but apart from the stock, small size and magwell I would say its a push. --Forrest1985 (talk) 13:01, 16 October 2018 (EDT)

The front sight and upper part of the handguard appear to be inspired by Z-M LR 300 ML and it has the bolt-up system from Daniel Defense handguards. The siphon like shape of the upper receiver looks similar to the LWRC IC-PDW. The muzzle resembles "Strike Industries Triple Crown Compensator". The pistol grip looks like "Luth-Ar Ar-15 Lr-308 Chubby Grip Ergonomic Rubberized Pistol Grip". You seem to be right about the minimalist stock but in game it is telescopic like the PDW stocks. It is cool design overall but I find the handguard lacking an upper rail to be rather impractical. --Nanomat (talk) 19:00, 20 October 2018 (EDT)

While at first glance it did remind me of a PK machine gun, I'm not sure if the resemblance is strong enough; that weapon probably belongs to the talk page (as we've done with some weapons in BO3 and IW). On another note, the trigger guard and the screw placements above it are similar to that of the Heckler & Koch MG5. --Ultimate94ninja (talk) 08:30, 17 October 2018 (EDT)

I could understand that viewpoint. Then again, viewpoint is pretty important here; most of my conclusions about these weapons are drawn from videos such as this one, where the weapons are shown in first-person; the VKM looks a lot more like a PKM in first-person that it does from a side-on view. Sorry for taking 2 days to reply. Pyr0m4n14c (talk) 09:35, 19 October 2018 (EDT)

As far as I'm concerned BO4 is an alternate history thing that happened after the events of BO3 and would involve time travel/changing history, but that never came to fruition as campaign was scrapped. That's what was leaked anyway through DraconicSalad (talk) 00:23, 23 October 2018 (EDT)

Well, all BO3 and BO4 are mean to be a simulation. Look at the operator's ability to "Glitch". Maybe the weapons existed at both times or maybe the "forwarded" are fictional.--Dannyguns (talk) 07:02, 1 November 2018 (EDT)

Also, fwiw, the Paladin is similar to the Bushmaster BA50 with the left sided, forward oriented bolt action mechanism if anyone thinks that’s worth putting on the page.--AgentGumby (talk) 22:11, 23 October 2018 (EDT)

I have the definitive breakdown of the Mozu. It has the base frame of the Mateba Autorevolver + barrel end of the Smith & Wesson Model 629 Stealth Hunter from COD online + cylinder and ejector rod from Chiappa Rhino. The grip appears to be inspired by something like this (the one before the last pic). Same grip design is also depicted here but I didn't find anything else on this grip. What you think Ninja? --Nanomat (talk) 16:59, 30 November 2018 (EST)

Can someone also tell me what this strange thing is on the side of the M1895's receiver? Is it some kind of mount for side scope, or what is it? It also has an additional upper ghost ring, although I do not see much benefit from this. --Slon95 (talk) 14:12, 16 August 2019 (EDT)

If you're talking about the bit at the front of the receiver, I think it's just the mount for the aftermarket rear aperture sight. And yeah, it is kinda pointless; normally an aftermarket aperture would be mounted further back on the receiver (generally with some sort of flip-up mount), and have a smaller aperture to use for more precise shots; here, they've widened it so much that it'd barely be useful as a rear sight for anything other than a shotgun. Pyr0m4n14c (talk) 14:39, 16 August 2019 (EDT)

So, I decided to look for it, and it turned out that this is Climbing Lyman sight, quite popular for lever-action rifles. The whole joke is that they literally mirrored it, and it respectively stands backwards. --Slon95 (talk) 17:35, 16 August 2019 (EDT)

Weapons that the Vapr-XKG could be based on (Including Photos) 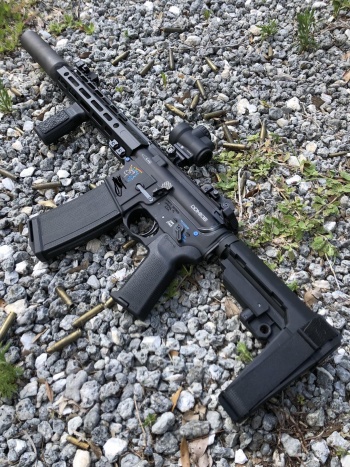 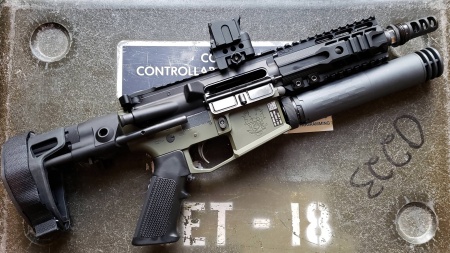 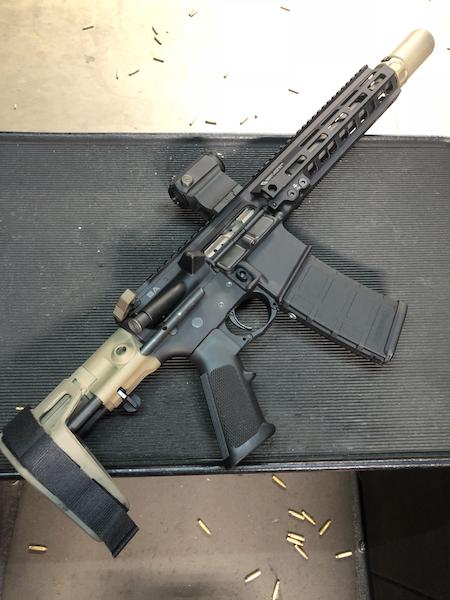 I found something. The CXP-08 could easily fix the gun. It looks so similar to the CXP-08, which is an airsoft AR-15.