Slightly different angle where I have sharpened this image and adjusted the contrast, can you see the original P229 profile slide and the half height slide serrations now? 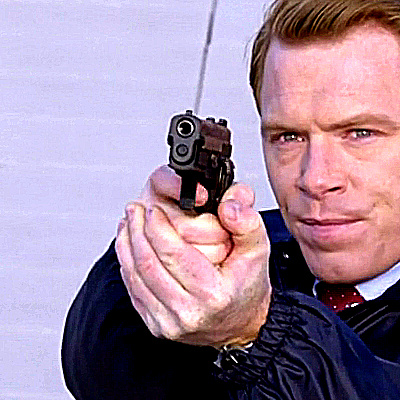 I don't feeling like arguing about it anymore. I would be glad to get help on this page since I did start it. I think The Blacklist will be the best thriller tv show since 24, but we will just have to wait and see. I have a program on my laptop where I can get screen grabs from media players like iTunes and such, the one thing I will need help on is identifying certain weapons because I am really only familiar with the more popular guns of this era--Coltmth (talk) 08:50, 25 September 2013 (EDT)

Can someone with perhaps more in depth knowledge say anything about that, because I call fake, I mean sure they had the stapple hollywood pop-gun 5.56 suppressors, but they use actual suppressors the sound effect is just toned way down, I mean even if we take into account it was a 9 , the sound should be unchanged right? Someone correct me if I'm wrong --Iceman (talk) 04:37, 29 November 2013 (EST)

I can see the theory, it provides a space for the gas to expand in, but you'd need a pretty strong bottle and it wouldn't be particularly quiet, and it'd be good for one or two shots if it worked at all. It might work with something like a 2 litre cola bottle and a .22, but anything smaller and bigger (respectively) and the bottle would probably explode on the first shot. If the bottle's glass, you might as well stick a hand grenade on the front of the gun and be done with it. Evil Tim (talk) 05:41, 29 November 2013 (EST)

It will sort of work, however not really as depicted in the show. Firstly, her Glock doesn't have a threaded barrel and the bottle is just attached onto the front of the slide by magic in this case. Secondly, the end of the bottle is closed in the show where in reality it would need to be open. This may seem counter intuitive, but assuming the bottle is just taped on or whatever, unless there is a hole for the gasses to bleed through the bottle would immediately just be fired off the end of the gun without suppressing the sound in any way (probably making it louder in fact). Real suppressors have a series of baffles on the inside which slow down the muzzle blast (they don't trap it, they just delay the time before it exits through the front of the suppressor) and as there are no baffles in a plastic bottle it would be really inefficient (particularly on a small bottle like this) meaning that the shot would still be pretty loud. --commando552 (talk) 07:52, 29 November 2013 (EST)

Thats was what I was thinking, how would an FBI profiler a rookie at that know about such a thing anyway, that was even more unbelievable. --Iceman (talk) 11:18, 29 November 2013 (EST)