Sicario: Day of the Soldado

From Internet Movie Firearms Database - Guns in Movies, TV and Video Games
(Redirected from Sicario 2: Day of the Soldado)
Jump to: navigation, search

Sicario: Day of the Soldado is the 2018 sequel to the 2015 crime thriller Sicario. The sequel was written by Sicario screenwriter Taylor Sheridan and directed by Stefano Sollima. Benicio del Toro returns as the mysterious operative Alejandro, who reunites with his US government operative partner Matt Graver (Josh Brolin) in order to start a war between rival Mexican cartels to disrupt the terrorist attacks that occurred on US soil. Jeffrey Donovan also returns as Steve Forsing from the original film.

The following weapons were used in the film Sicario: Day of the Soldado:

A Beretta 92FS can be seen used by Alejandro Gillick (Benicio del Toro).

The Beretta 92FS is wielded by the masked gunman.

A cartel member is seen with a Glock 17.

Another cartel member uses a Glock 19.

A gang member points a Glock 19 at Alejandro.

Alejandro carries a SIG-Sauer P226 DAK as his sidearm. 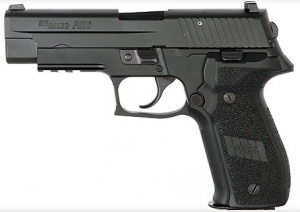 Alejandro armed with a SIG. 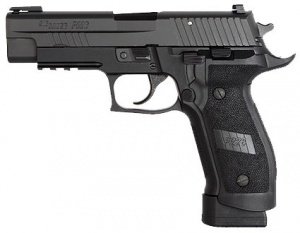 The SIG-Sauer P226 TACOPS is handed to Miguel. 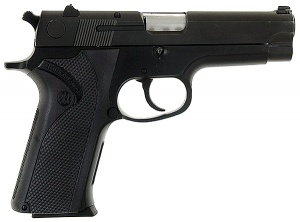 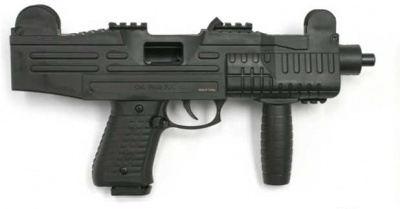 A Heckler & Koch MP5A3 is used by Matt (Josh Brolin) during Isabel's kidnapping.

Matt uses a Heckler & Koch MP5A3 during the kidnapping.

Matt also is seen with an MP5A3.

A disguised Matt holds a MP5A3.

A Heckler & Koch MP5K is used by a gunman during an ambush.

The MP5K is seen used during an ambush. 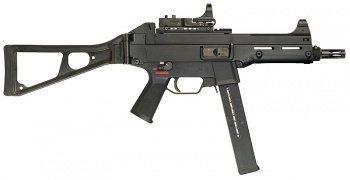 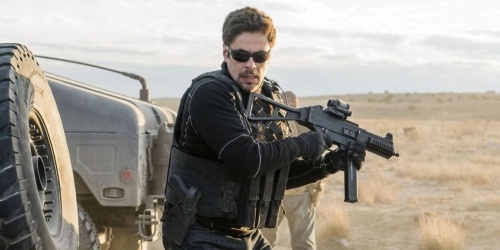 Alejandro fires from inside a Humvee when an ambush breaks out.

Alejandro reloading his UMP during the firefight.

Alejandro aims the UMP during a confrontation.

A Somali pirate is seen with a shortened AKMS rifle.

A Somali pirate sets down his shortened AKMS.

The M4A1 Carbine is used by various operatives, including Steve Forsing (Jeffrey Donovan). During the Somalia raid in the early parts of the film JSOC Operators are seen with mostly suppressed M4A1s with various other attachments.

During the Somalia raid you can briefly see the suppressed M4A1s the JSOC Operators are seen using.

A SWAT officer holds a M4A1.

On the left, some operatives along with Steve Forsing (Jeffrey Donovan) are armed with the M4A1.

On the right, some operatives are armed with the M4A1.

Matt (Josh Brolin) uses a Daniel Defense M4A1 with a foregrip, Magpul PMAG, tan EOTech 553 sight, and SureFire M720V RAID light as his main weapon, as he had previously used in the previous film. 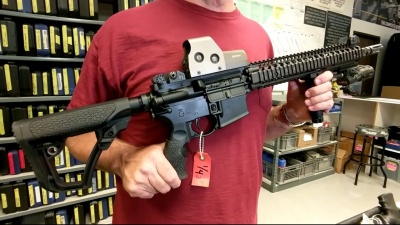 Matt opens fire with the DDM4.

Matt disembarks from a Blackhawk helicopter with his DDM4.

A side profile shot of Matt's DDM4.

An SCAR-L CQC is seen used by one of Matt's operatives.

The operative on the right with the SCAR-L CQC.

The Remington ACR-E is seen in the hands of one of Matt's Operatives during the convoy ambush.

One of the Matt's operatives can be seen wielding a Heckler & Koch G36C with an EOTech sight. A cartel member is also seen with a G36C while dragging a fellow dead cartel member back to their vehicle when their attack on the convoy fails.

An operative standing behind Matt holds a G36C.

A cartel member with a G36C drags a dead comrade.

The operative on the right is armed with a Heckler & Koch G36C with an EOTech sight.

A masked gunman who participates in Isabel's kidnapping is armed with the Norinco Type 56-1, the Chinese copy of the AKS-47.

A masked gunman is armed with the Norinco Type 56-1, identifiable by their hooded front sights.

During the Somalia operation early in the film, a JSOC operator uses what appears to be a suppressed Heckler & Koch HK417 taking out two Somali pirates. Towards the end of the film a 417 is seen in the hands of one of Matt's operatives eliminating a few cartel members.

An operative aims a HK417 equipped with a scope and a brass catcher.

Corrupt Mexican Federal Police officers are seen firing a pickup-mounted FN M240B machine guns during the ambush on the convoy.

A Mexican federale turns his M240B during an ambush.

A Mexican federale fires a M240B during an ambush.

During the convoy ambush cartel gunmen use RPGs to take out an armored personal carrier. After the ambush, a cartel member is seen dragging a dead member back to their vehicle with an RPG launcher slung to his shoulder.

The cartel member discards his RPG-7 before fleeing.
Retrieved from "http://www.imfdb.org/index.php?title=Sicario:_Day_of_the_Soldado&oldid=1326996"
Categories: