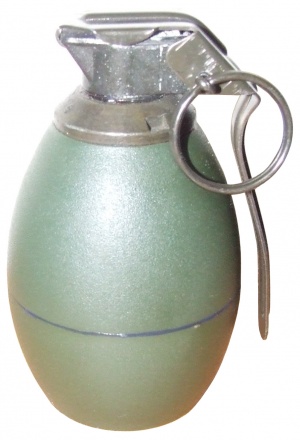 The Schermuly Training Grenade was originally designed, as the name implies, as a training grenade for the British Army. The body of the grenade was plastic with an open bottom with the interior filled with a paper wrapped pyrotechnic charge. Once the pin was pulled and the lever released there was a two second delay before this charge was propelled out the base of the grenade and exploded about half a second later. Although intended as a training grenade it was found it could also be used as a stun grenade and was one of the first stun grenades used before the implementation of more suitable purpose built devices.

The Schermuly Training Grenade has appeared in the following: