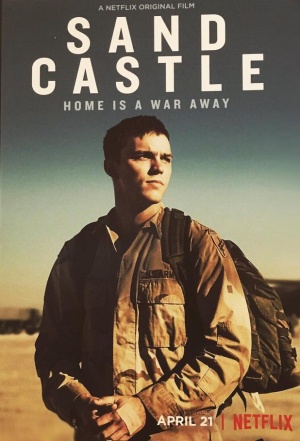 The following weapons were used in the film Sand Castle:

On the left, the M16A2 is carried by Sergeant Dylan Chutsky (Glen Powell).

In the several scenes, U.S. Army soldiers can be seen carrying M4A1 carbines. Staff Sergeant Harper (Logan Marshall-Green) uses an M4 with no accessories other than rail covers. The film is set during the beginning of the 2003 invasion of Iraq and thus optics and accessories were not as widespread among regular troops as they are today.

SF soldiers conduct a raid while armed with the M4A1.

On the right, the M4A1 is carried by Staff Sergeant Harper (Logan Marshall-Green) .

The Beretta 92FS, standing in for the U.S. Military issued M9, appears several times in the film.

An SF soldier pulls his Beretta.

Cpt. Syverson (Henry Cavill) carries what appears to be a two-tone Beretta 92FS with custom grips.

In the center, Syverson (Henry Cavill) carries the Beretta with the custom grips.

The M240 machine guns can be seen mounted on US humvees.

The M240 mounted on US humvee.

The M60 machine gun also can be seen mounted on US humvees and other SF vehicles.

The M60 is mounted on an SF vehicle.

The M60 is seen mounted on the Special Forces pickup.

The M60 is seen on the sand at a staging area.

A paratrooper version of the M249 is seen carried by Sergeant Burton (Beau Knapp).

The M249 SAW paratrooper is seen at the right carried by Sergeant Burton (Beau Knapp).

The Browning M2HB heavy machine gun also can be seen mounted on US humvees.

The Browning M2HB heavy machine gun mounted on US humvee.

An AH-1W Super Cobra helicopters with its three-barreled version of the GE M61 Vulcan, the General Dynamics M197 Vulcan, is seen providing air support for the troops.

The General Dynamics M197 Vulcan is seen on the Super Cobra providing air support for the troops.
Retrieved from "http://www.imfdb.org/index.php?title=Sand_Castle&oldid=1333073"
Categories: