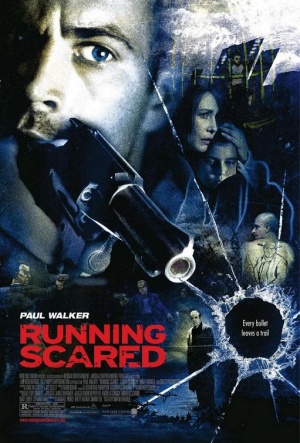 Running Scared (2006). Note that Paul Walker wields a Smith & Wesson Model 13 on the cover, which is never seen in the film. On an alternate movie poster, we see Walker holding a Marksman 1020 BB gun.

Running Scared is a 2006 crime thriller starring Paul Walker as Joey Gazelle, a low life mobster who is asked to dispose of some guns used in a drug deal between mobsters and dirty cops that went bad. Instead of throwing them in the river as he should, Joey hides the guns in his basement, which proves to be a mistake when Joey's son Nicky (Alex Neuberger) and his neighbor friend Oleg Yugorsky (Cameron Bright) witness him hiding them. Oleg steals the .38 snubnose used by Tommy "Tombs" Perello (Johnny Messner) and attempts to kill his abusive Russian stepfather, Anzor Yugorsky (Karel Roden), which he fails to do. To make matters worse, Anzor's uncle is mob boss Ivan Yugorsky (John Noble), who is displeased by this murder attempt. Now Joey must get the gun back, save Oleg, and hope he survives the night. Despite the American setting, the film was shot in Prague, and several of the semi-automatic handguns seen in the film are in reality 8mm blank firing props (because most of these guns common to the US are unavailable in the Czech Republic). Not to be confused with the 1986 film of the same name that starred Billy Crystal and Gregory Hines.

The following weapons were used in the film Running Scared (2006):

The story revolves around the ".38 Snubnose" used by Tommy "Tombs" Perello (Johnny Messner) during the bad drug deal at the start of the film, a nickel plated Smith & Wesson Model 36 with ivory grips, which he uses to kill several dirty cops, requiring the weapon to be disposed of. He gives the snubnose to Joey to get rid of, but he instead hides it in his basement, where it is stolen by Oleg Yugorsky (Cameron Bright) and used to shoot his step-father Anzor Yugorsky (Karel Roden). Oleg is hiding out when he is found by the Raggady Man (played by one of the main characters uncredited). Who forces Oleg on a ride along to rip off some drug dealers. A shootout occurs leaving the two drug dealers dead. Oleg takes off again with S&W 36. Where he finds a prostitute (Idalis DeLeon) being beaten by her pimp (David Warshofsky). The gun is later given to a prostitute "Divina" (Idalis DeLeon), who helps Oleg out. Eventually Joey's son Nicky (Alex Neuberger) hides it in the tank of a diner toilet, where it is found by Manny Perez (David Monteiro). Manny loses it in a card game to Julio (Thomas Rosales Jr.). Lester the Pimp's (David Warshofsky) brings his Cadillac into Julio's shop, Julio shows off what he won in a card game. Lester the Pimp sees that it's the same gun from before and buys it from Julio for $500 because of the significance of the gun. He then turns the tables on Oleg and Joey at the end of the film by holding it on them. 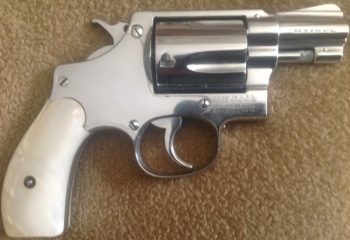 The nickel Smith & Wesson Model 36 stored in Joey's jacket pocket as he takes off from the diner at the start of the film. Note the ivory grips.

Tombs draws his Smith & Wesson Model 36 from his ankle holster and shoots a dirty cop.

Joey examines the Smith & Wesson Model 36 when Tombs hands it to him.

Oleg holds the Smith & Wesson Model 36 on Lester the Pimp outside a convenience store. His grip wouldn't be that bad if he didn't have both fingers on the trigger.

Divina holds her Smith & Wesson Model 36 on the pharmacy clerk to get Oleg some asthma medicine.

Nicky and Oleg hide the Smith & Wesson Model 36 in the toilet tank, where it is found by the janitor Manny Perez (David Monteiro).

Lester the Pimp cocks the hammer on his Smith & Wesson Model 36. Here we see both the hammer is missing the firing pin and the the gun is empty, so basically he is no threat at all.

A good full shot of the Smith & Wesson Model 36.

Joey Gazelle's (Paul Walker) sidearm throughout the film is a Bruni 96 blank-firing M1911 replica; it can be identified by its muzzle diameter, gas port behind ejection port, short fully-cocked hammer, and external extractor. 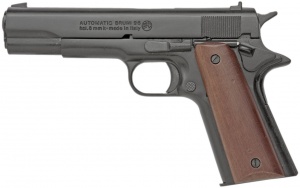 Joey fires his M1911 during the opening shootout, while keeping an excellent high grip on the weapon.

Note how the hammer does not cock back as far as on a real M1911-series pistol.

Joey with his M1911 drawn at Anzor's house after an errant bullet smashed through his window while eating dinner. Note good trigger discipline and gas port behind ejection port.

Joey searches for Nicky with his M1911 and flashlight at the ready, using the Harries technique quite effectively.

Joey asks the raggedy man where Oleg and the snub nose .38 are.

Joey holds his M1911 on a thug. Note external extractor.

A Glock 17 is used by a drug dealer who holds Oleg (Cameron Bright) hostage, before he is killed in a shootout with the Raggedy Man. A Glock is also used by Anzor Yugorsky (Karel Roden) during the final shootout in the hockey rink before he is killed. It is then taken and used by Ivan Yugorsky (John Noble) and then taken and used by Joey briefly. In reality, the gun is an 8mm Bruni "GAP" pistol. 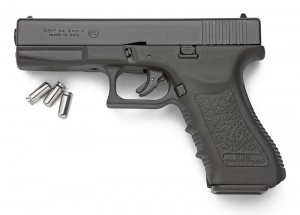 Anzor holds his Glock 17 on Oleg.

Anzor presses his Glock 17 to Oleg's temple. Note the gas port hole seen on the side of the barrel protruding through the ejection port.

A Umarex GPDA-9 is wielded by Sal "Gummy Bear" Franzone (Michael Cudlitz) during the opening shootout, and is also taken by Joey (Paul Walker) to dispose of. Instead he stores it in his basement and it is taken by Teresa Gazelle (Vera Farmiga), who uses it to kill the creepy couple (who seem like they came out of Germanic folklore) who kidnap Oleg (Cameron Bright). In reality it is a 9mm blank firing prop based on the Browning BDA. 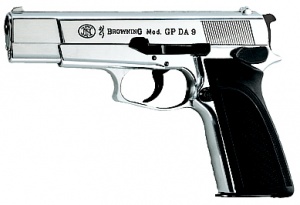 Umarex GPDA-9 - 9mm PAK. This a theatrical blank firing pistol, with correct FN trademarks that fires the proprietary 9mm PAK blanks. This is not a real firearm.

Sal slides his Umarex GPDA-9 under the bed while being held at gunpoint by the dirty cops. He gets it back when Joey and he take cover behind the bed when the shootout starts.

Sal with his Umarex GPDA-9.

"I said back the f**k off, you sick twisted motherf**king c**t!" This movie's full of colorful dialogue, and this is a glaring example.

Teresa sets down the GPDA-9 to tend to Oleg after finding him in the closet with a bag over his head.

Teresa guns down the pedophile couple with the GPDA-9.

Frankie Perello (Arthur J. Nascarella) holds the GPDA-9 on Ivan Yugorsky (John Noble) during the shootout at the hockey rink.

Tommy "Tombs" Perello (Johnny Messner) wields a Beretta 92FS during the final shootout, which is later picked up and used by Oleg (Cameron Bright). In reality the pistol is a Bruni Model 92 blank firing 8mm stage prop. 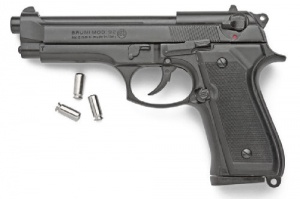 Tombs cocks the hammer on his Beretta 92FS.

Tombs is shot by a shotgun while firing his Beretta 92FS. This is one of the few scenes where squibs were used over CGI blood, and actor Johnny Messner was somewhat afraid of the squibs when they went off.

An unknown FBI agent is seen using a CZ-100 pistol as his sidearm. Being that this movie is filmed in Prague and the CZ-100 is produced in the Czech Republic, it is likely this is an actual blank converted firearm that the armorers own and not an 8mm prop.

When Anzor Yugorsky (Karel Roden) is watching John Wayne's death scene from the movie The Cowboys, we see a character using a Single Action Army revolver.

A character wields a nickel finish Single Action Army in The Cowboys.

A character in The Cowboys is seen firing a Colt Dragoon 1848 2nd Model.

The dirty cops during the bad drug exchange use a couple of Franchi PA7 shotguns with 14" barrels and pistol grips.

Dirty cops burst in with their Franchi PA7's at the ready.

In Hollywood the rules of physics (you know, "density vs. mass" and all that blasphemy) matter little as we see this guy get thrown across the room after being hit by a shotgun round. Also note how the shell is already clearing the weapon, even though it is a pump-action and the manual operation is obviously slower than the flying bullets.

A dirty cop blasting away with his Franchi PA7.

A Franchi PA7 laying on the ice of the hockey rink.

Reverse shot of the same scene.

One of the dirty cops during the bad drug exchange wields a sawed off 18" Remington 870 with raised barrel ribbing and wood furniture.

A dirty cop wields a sawed off Remington 870.

The dirty cop with the Remington 870 is shot by Tombs.

One of the mobsters during the bad drug deal is packing an IMI Uzi but is shot before he can use it.

One of the mobsters flashes his IMI Uzi in his coat.

FBI Agents are seen armed with unknown AR-15 variants with carbine barrels and forends, A1-style upper receivers, and full stocks. They are likely airsoft props, similar to the ones seen in Daredevil.

An FBI agent armed with an unknown AR-15 variant.

Joey (Paul Walker) has quite a collection of firearms he should have disposed of stored in his basement, keeping them as evidence for later convictions.

Most of the guns are in plastic bags and hard to see. The one gun in this shot looks like a Desert Eagle, likely an 8mm prop.