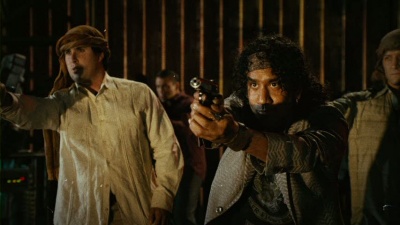 Robert Rodriguez (left) fires a chrome pistol as one of henchmen employed by Abby (Naveen Andrews) in Planet Terror.

Robert Rodriguez is a Mexican-American director/producer best known for his "rebel"-style of making movies, which includes writing, directing, shooting, editing and even scoring his own films. He's well known for his El Mariachi trilogy of action films as well as for the Spy Kids trilogy. He frequently collaborates with fellow director Quentin Tarantino on such projects as From Dusk Till Dawn and Grindhouse. Among the firearms that are frequently seen in his films are the MAC-10 (usually suppressed) (as used in El Mariachi, Desperado, Planet Terror, Once Upon a Time in Mexico) and the Codpiece Revolver prop (as used in his films Desperado, From Dusk Till Dawn and Machete Kills).


The following lists the films and television series in the IMFDB produced or directed by Robert Rodriguez:

The following 19 pages are in this category, out of 19 total.