Robert Redford as Major Julian Cook with an M1 Garand in A Bridge Too Far (1978). 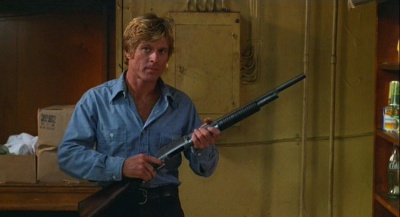 Robert Redford as Warden Brubaker with a Winchester Model 1897 in Brubaker (1980).

Robert Redford (born August 18,1936) is an American actor, director, producer, businessman, environmentalist, and philanthropist as well as being the founder of the Sundance Film Festival. In addition to his lengthy acting career, which began professionally in 1960 and includes such iconic films as Butch Cassidy and the Sundance Kid, The Sting, and Out of Africa, Redford has earned numerous accolades as a feature film director, notably receiving the Academy Award for Best Director for his 1980 film Ordinary People.

See the Discussion for the films directed by Robert Redford.