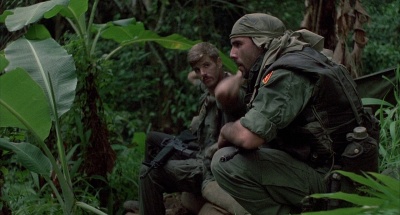 On the left, Robert "Rock" Galotti as Huffmeister has the M16A1 in his lap in Platoon.

Robert "Rock" Galotti is a veteran weapons coordinator who has provided the firearms for such films as Starship Troopers, Jarhead, The Matrix Reloaded, Transformers as well as for most of John Woo's American films, including Broken Arrow, Face/Off and Mission: Impossible II.