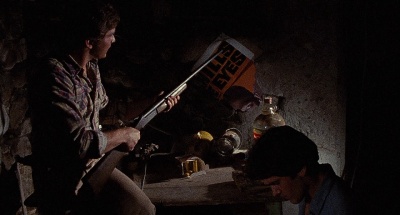 Richard DeManincor holding a Winchester Model 37A as Scott in The Evil Dead (1981).

Richard DeManincor is an American actor primarily known for his role as Scott in The Evil Dead (in which he is credited as Hal Delrich in a failed attempt to make a non-union movie being a union actor). He later appearead in a second feature film by Sam Raimi - Crimewave after which he had retired from acting for nearly thirty years, before taking a role in 2013 short film Bong Fly.