The Reichsrevolver M1879 and variants can be seen in the following films, television series, video games, and anime used by the following actors: 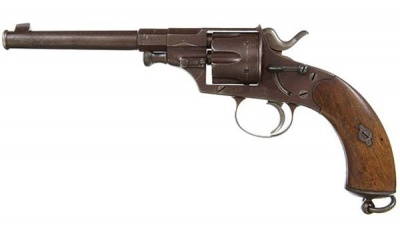 Reichs-Commissions-Revolver Modell 1879, more often referred to as the Reichsrevolver M1879, was the service pistol of the Imperial German Army until 1908 when it was replaced by the Luger P08. Later, this revolver was used by non-frontline troops in WWI and even into WWII.

The Reichsrevolver is a somewhat strange weapon (compared to other service weapons of the period, including the German contract Single Action Army). One of its features is the characteristic lever safety on the left side. While this might seem like a good idea, in practice it somewhat disappointingly only blocks the hammer from cocking.

There is also no built-in ejector; this allowed some internet-journalists to make ridiculous claims that reloading the Reichsrevolver allegedly required partial disassembly to knock out the shells with a cylinder rod or by hand. In reality, the ejector was a separate stick (metal on the M79 and wooden on the M83), which was worn separately on a string attached to the holster; any other on-hand item could also be used if desired. The origins of this strange idea are still obscure; most likely, it was done on occasion for quicker removal from the holster or from the belt. While most revolvers use a retractable ejector for unloading, the lack of an integrated ejector on the Reichsrevolver was likely a design choice to simplify production.

There were also many commercial variants produced by firms such as Dreyse. They existed in various configurations, very different from each other, including the pocket and top-break models. 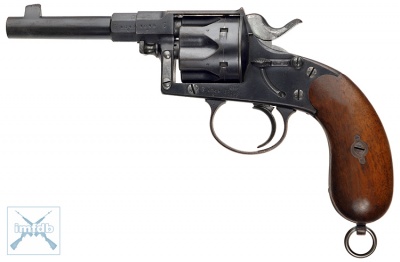 The Reichsrevolver M1883 (also called M1879/83) is a shortened version of the M1879. Despite the similar appearance, its construction is different from the full-sized version, and there are few interchangeable parts with the M1879.