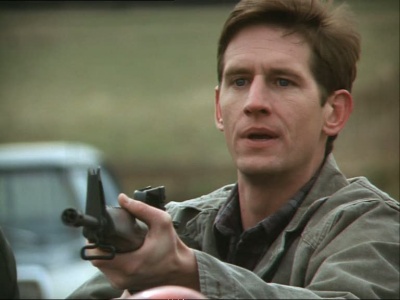 Ray McKinnon holds an M16A1 as Deputy Bob Cheshire in In the Line of Duty: Manhunt in the Dakotas (1991).

Ray McKinnon is a writer/actor/director who has appeared in such films as Needful Things, Apollo 13, Mud, O Brother, Where Art Thou? and A Perfect World in addition to his television roles as Reverend H.W. Smith in Deadwood, the doomed Charlie Campion in The Stand and Lincoln Potter in Sons of Anarchy. In 2001, he received an Academy Award for Best Live Action Short Film for The Accountant, which he wrote, directed, and starred in with Eddie King and Walton Goggins. He was also the husband of the late actress Lisa Blount, who was well known for her role as Lynette Pomeroy in the 1982 film An Officer and a Gentleman.