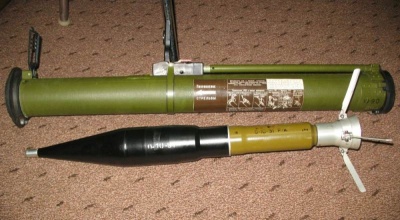 The RPG-26 Aglen is a disposable anti-tank rocket launcher developed by the Soviet Union. It fires a single-stage rocket with jack-knife fins, which unfold after launch. The rocket carries a 72.5 millimeter diameter high explosive anti-tank single shaped charge warhead capable of penetrating 440 millimeters of armour, one meter of reinforced concrete or one and a half meters of brickwork. It has a maximum effective range of around 250 meters.

The RPG-26 and variants can be seen in the following films, television series, video games, and anime used by the following actors: