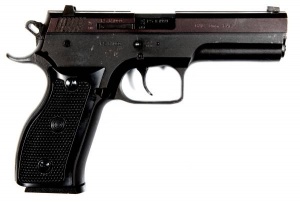 The Povzbroj PS-97 is a Slovak pistol with short-lived production, based on the CZ-75. The Slovak army ordered 32000 pistols, however, due to various difficulties, only 1600 were produced before the Povzbroj firm finally went bankrupt in 2001. There were attempts to continue development, but in the end PS-97 in competition gave way to the Grand Power K100.

The Povzbroj PS-97 Arrow and variants can be seen in the following films, television series, video games, and anime used by the following actors: