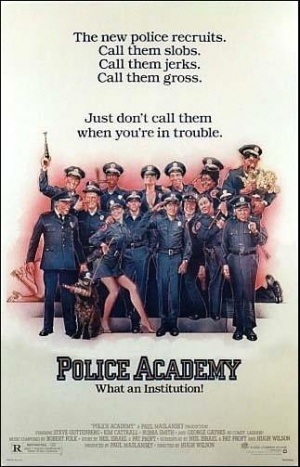 Police Academy is a 1984 crime comedy that follows a group of new recruits as they undergo their training to become police officers. The comedy would spawn a series of sequels, an animated series, as well as a live action television series.

The following weapons were used in the film Police Academy:

All of the Police Academy recruits are issued the Smith & Wesson Model 10 HB and are seen firing the revolver on the target range. Cadet Carey Mahoney (Steve Guttenberg) is notably seen with it during the final standoff. 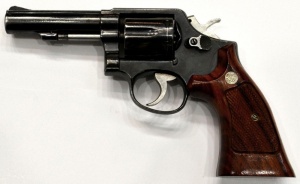 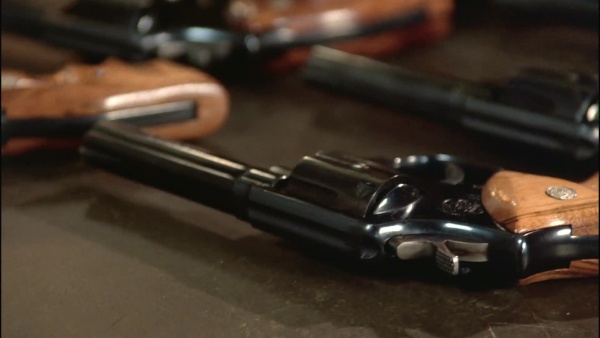 The Smith & Wesson Model 10 HB revolvers are set out for the cadets. These revolvers clearly have the larger grooved S&W 'combat' grips. 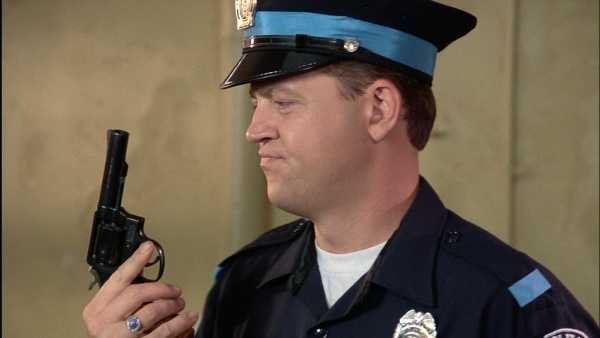 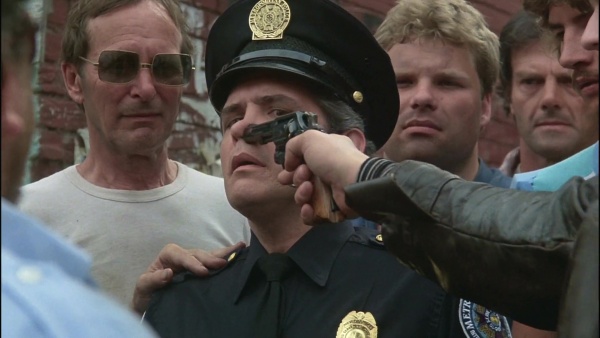 Lieutenant Harris (G.W. Bailey) is captured by the rioters, one of them sporting a captured S&W 10 HB. 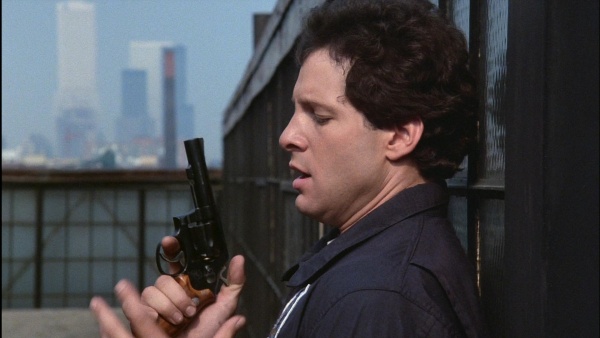 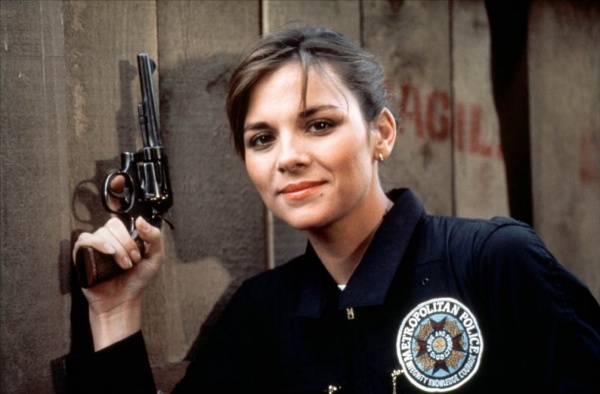 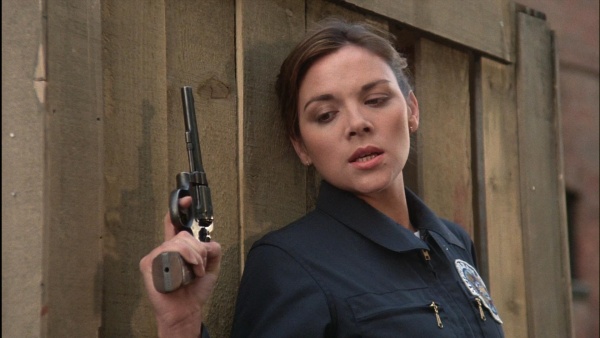 Cadet Karen Thompson (Kim Cattrall) with the Model 10 during the city riot.

In his previous job as a security guard, Eugene Tackleberry (David Graf) is seen pulling a Smith & Wesson Model 28 when he senses trouble. 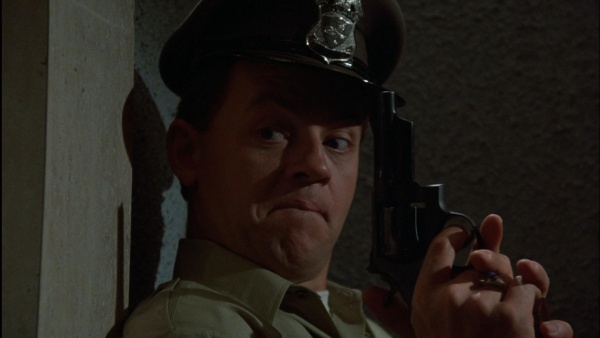 In his previous job as a security guard, Eugene Tackleberry (David Graf) is seen pulling a S&W Model 28.

Dissatisfied with his issued Smith & Wesson Model 10 HB revolver, Cadet Eugene Tackleberry (David Graf) decides to switch to the massive Smith & Wesson Model 629 given to him by his mother. He destroys an entire shooting target with one blast, before Harris takes the gun from him. 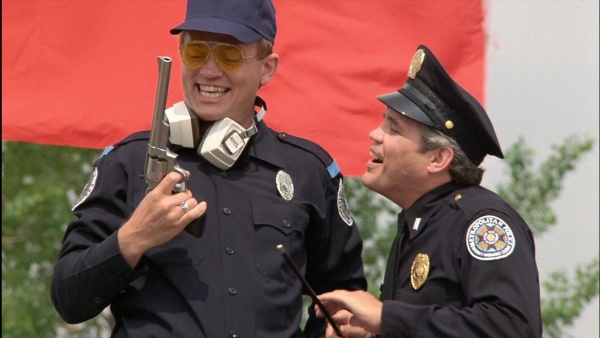 "Son, where did you get this gun?"
"My mom gave it to me!"
Tackleberry shows off the S&W Model 629. To which Lt. Harris (G.W. Bailey) sarcastically admires.

The cadets are also seen training on the range with the High Standard FLITE KING K-1200 Riot Standard Model. 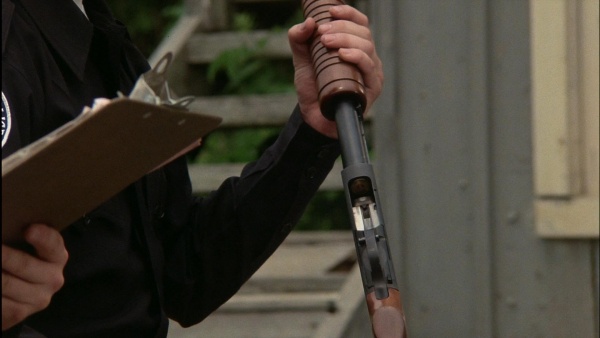 Detail of the K-1200 while getting loaded. 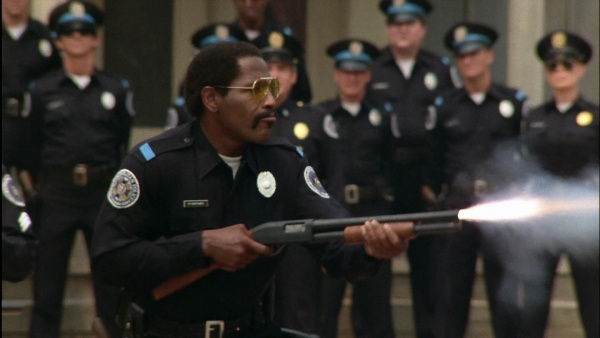 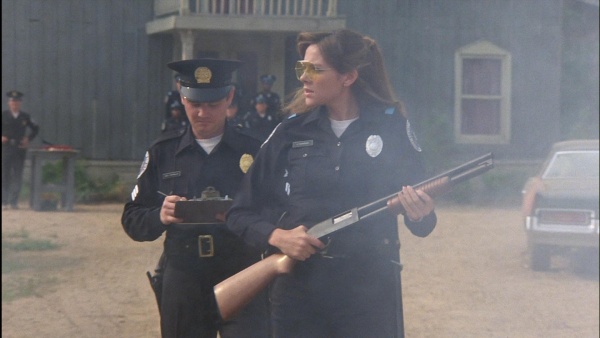 Karen Thompson with the High Standard.

Lieutenant Thaddeus Harris (G.W. Bailey) keeps a Flintlock Pistol in his office and inadvertently blows a hole in the ceiling with it. 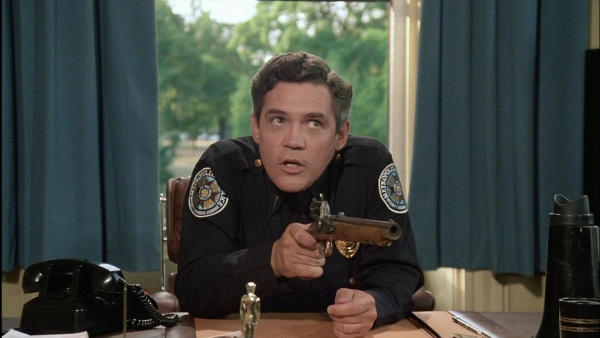 Apart from the Flintlock Pistol, Thaddeus Harris (G.W. Bailey) keeps several classic firearms on the wall in his office. These can be seen in the scene where he uses the Flintlock. 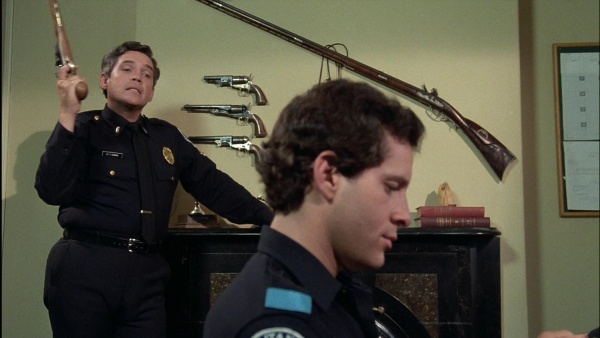 What appears to be a Kentucky Flintlock Rifle is seen to the above and right of all the pistols.