Overlord is a 2018 World War II horror film that focuses on a unit of US paratroopers on the eve of D-Day, who stumble upon a secret German laboratory that is experimenting on the citizens of a small French town. The film was directed by Julius Avery (Son of a Gun) and was co-produced by J.J. Abrams.

The M1911 is held by PFC Jacob Rosenfeld (Dominic Applewhite).

The Walther P38 is held by Chloe (Mathilde Ollivier).

Dr. Schmidt (Erich Redman) is briefly seen with a Walther PPK when he confronts Pvt. Boyce in the lab

Boyce is threatened by Schmidt with the Walther.

Corporal Lewis Ford (Wyatt Russell) carries an M1 Thompson as his primary weapon throughout the film, identifiable by its simplified rear L-sight.

An SS trooper holds the MP40.

The M1 Garand is the standard issue rifle carried by the 101st Airborne paratroopers in the film, including PFC Ed Boyce (Jovan Adepo).

The M1 Garand is the standard issue rifle carried by the 101st Airborne paratroopers.

PFC Ed Boyce (Jovan Adepo) clears the bunker with his M1 Garand. Note how this is a reverse shot, as the clip ejector is on the right side of the rifle.

This carbine also is used by PFC Rosenfeld.

The Karabiner 98k is held by the German soldier on the right.

SS soldiers armed with the Sturmgewehr 44.

Tibbet works the bolt in a closeup.

The Browning Automatic Rifle with its bipod is seen among the M1 Garands carried by the 101st Airborne paratroopers during the ride in the C-47.

At the left, Dawson (Jacob Anderson) is briefly seen with a Browning Automatic Rifle.

The MG34 is the principal machine gun used by the German forces guarding the bunker, seen both in sandbag emplacements and mounted on their vehicles. One of these is captured by the American troops and used by PFC Jacob Rosenfeld (Dominic Applewhite), who correctly identifies the machine gun as a two-man weapon when he is criticized for not reloading and firing more quickly. Several times in the film, the MG34 is referred to as the "buzzsaw" by the Americans; whilst this is a genuine piece of WW2 Allied slang, the nickname was actually given to the faster-firing MG42.

German soldier uses the MG34 mounted in the armored vehicle.

The Mk II Hand Grenade is carried by US soldiers in the film. A grenade is seen in the mouth of an SS soldier.

The Mk II Hand Grenade grenade is seen in the mouth of an SS soldier.

Model 24 Stielhandgranate "Potato Mashers" are seen among other explosives.

German soldiers use Flammenwerfer 35s to dispose of corpses. Later, Chole (Mathilde Ollivier) retrieves one to use against a zombie super-soldier. 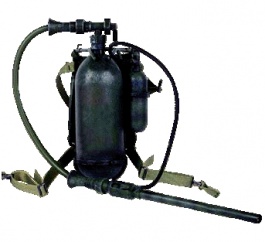 German soldiers use Flammenwerfer 35s to dispose of corpses.

Two Flammenwerfer 35s are seen in the cage.

Chloe werfs flammen with the Flammenwerfer 35.
Retrieved from "http://www.imfdb.org/index.php?title=Overlord_(2018)&oldid=1385116"
Categories: