Once a Thief is a 1965 noir crime drama directed by Ralph Nelson and starring Alain Delon as a retired criminal Eddie Pedak who is forced to participate in a new crime by his elder brother Walter.

The following weapons were used in the film Once a Thief:

A Smith & Wesson Military & Police revolver with 6" barrel is a valuable plot item. In the opening scene it is used during the robbery in Chinese general store (the identity of the robber is revealed only in the end of the movie). Later the same revolver is carried by Eddie Pedak (Alain Delon).

A robber draws the revolver in the opening scene.

Eddie, disguised as SFPD officer, holds his revolver during the robbery.

Eddie with revolver in Vido's apartments. 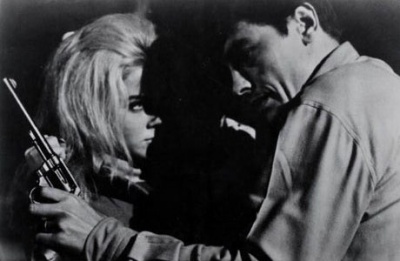 The revolver is perfectly seen on a promotion still.

James Arthur Sargatanas (John Davis Chandler), Walter Pedak's henchman, carries an M1911A1-style pistol, allways fitted with a sound suppressor. In the final scene the pistol is used by Eddie Pedak (Alain Delon). The pistol differs from a standard M1911 as is has slanted grooves on the slide (like Auto-Ordnance M1911A1 though the latter didn't exist in 1965). 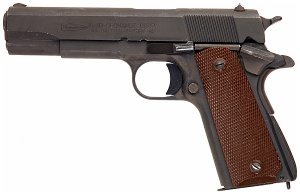 Auto-Ordnance M1911A1 - .45 ACP. This is a well worn blank adapted movie gun used in multiple World War 2 movies as a substitute for the Colt M1911A1

Sargatanas, disguised as SFPD officer, holds his pistol during the robbery. Note the slanted grooves.

Sargatanas and Eddie Pedak struggle for the pistol in the final scene.

Eddie fires the pistol until it runs dry.

Inspector Mike Vido (Van Heflin) holds a revolver. It resembles a Smith & Wesson Model 10 HB with 3" barrel but unlike Model 10 HB the revolver has a round front sight.

A security guard carries a revolver in holster. Only a grip can be seen.