Oculus is a 2013 horror film directed by Mike Flanagan (Doctor Sleep), starring Karen Gillan and Brenton Thwaites as siblings who confront a supernatural mirror responsible for madness, tragedy, and death suffered by their family.

The following weapons were used in the film Oculus: 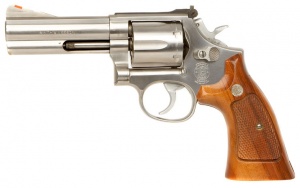 Tim Russell pulls the Smith & Wesson in his dream.

The barrel of Alan's Smith & Wesson can be seen.

The Smith & Wesson is pulled by Alan Russell.

The Smith & Wesson is knocked from Alan's hands.

Desperate to be free of the mirror's influence, Alan has Tim point the revolver at him...

...and forces him to pull the trigger.

Nearly all police officers (two of whom were played by Brett Murray and Zak Jeffries) carry a holstered Glock 17 at the film's climax.

Two police officers with the holstered pistols. Note the Smith & Wesson on the floor.

The grip of the policeman's pistol can be seen.

A policewoman carries a similar handgun in her holster.

Young Tim (Garrett Ryan) and Kaylie (Annalise Basso) play with a toy pistols at several points. Numerous gun-wielding toy soldiers can be seen on the table of Young Tim's room.

A good view of the toy gun in the hands of Tim.

Kaylie and Tim hold their "guns" during the "shootout" between the two.

Numerous toy soldiers are seen on the table. One of them holds a rocket launcher based on the Bazooka series of recoilless anti-tank launchers.
Retrieved from "http://www.imfdb.org/index.php?title=Oculus&oldid=1410034"
Categories: