The Sedgley Fist Gun, commonly referred to as the Sedgley OSS .38 glove pistol, is a World War II firearm. Officially known as the Hand Firing Mechanism, Mk 2, it was manufactured by Sedgley, Philadelphia for the US Marines and the US Navy. Its ammunition capacity is a single .38 cartridge and is fired by punching the target, which depresses the plunger and fires the round. 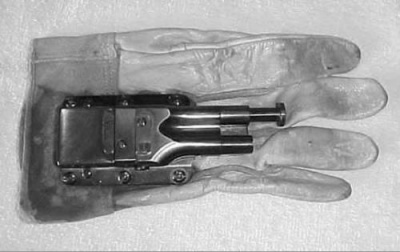 The Sedgley Fist Gun and variants can be seen in the following films, television series, video games, and anime used by the following actors: