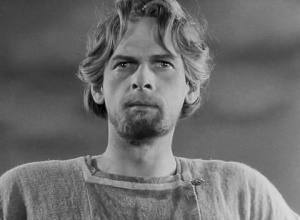 Nikolay Cherkasov in his most famous role of Alexander Nevsky in same title movie.