Nightmare House 2 is a survival-horror modification for the first-person shooter game Half-Life 2 (requiring the installation of Half-Life 2: Episode 2 to be played) developed by We Create Stuff, initially released in 2010. The modification serves as a sequel to Nightmare House, a small horror-themed map pack released in 2005, rebooting the original mod's story and introducing brand new and proprietary models, textures, gameplay, voice acting, etc.

It is divided in several chapters, with the Prologue being set in a remastered version of the house from Nightmare House and the later chapters in the "Never Lose Hope Hospital". The player character ("The Patient") wakes up in the mental ward of this hospital, which is abandoned, infested with zombies and haunted by the ghost of a woman who constantly torments him. The Patient must travel and fight his way through the hospital to find a way out, most of the time completely alone; with the occasional help of the sketchy Dr. Romero or a few SWAT team members sent to a "search and destroy" mission.

The following weapons appear in the video game Nightmare House 2:

The Colt Model 1903 semiautomatic pistol is the first firearm the player acquires in both the Prologue and in Chapter 1. It has a capacity of 9 rounds (implying that one round is always put in the chamber) and mediocre power and accuracy, best used as a backup weapon. The markings on the gun state that it was manufactured by "Bolt" 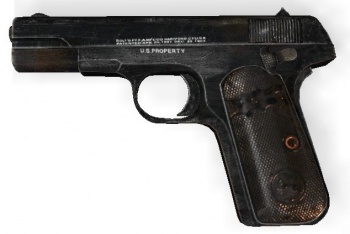 World model of the Colt Model 1903. "U.S. PROPERTY" is written on the frame beneath the slide, indicating it was used by the military.

The Model 1903 inside an "In Case of Emergency, Break Glass" case.

Assuming that he is in an emergency, The Patient character breaks the glass and arms himself with the pistol.

The Taurus Model 66 revolver appears in the game (both in the Prologue and later chapters) as a powerful and accurate sidearm, but with rare ammunition. It's good for finishing off stronger enemies with more ease, and is pretty much a one-hit-kill with weaker ones. According to the markings, the revolver was made by "Saurus". 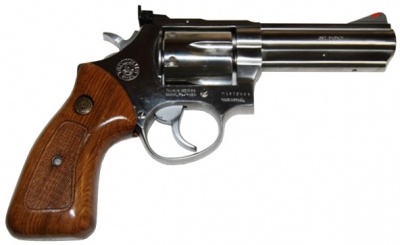 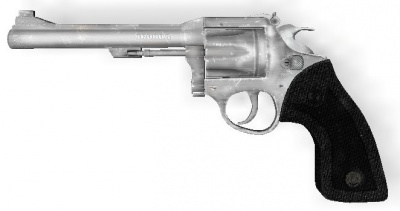 World model of the Taurus. It bears differences from the model seen above, such as a unshrouded ejector rod. The grip is a regular wooden grip with a synthetic texture, rather than being an actual rubber grip, as evidenced by its shape and presence of a screw.

The revolver placed on a chair in the Prologue's house.

The Patient holding the revolver, now in the Never Lose Hope Hospital.

Reloading the revolver; this animation shows an odd empty space in front of where the cylinder normally sits.

The Heckler & Koch UMP40 submachine gun with a RIS foregrip appears in the game, first seen in the hands of some SWAT team members and given to the player shortly afterwards. The straight box magazine plus 30 round capacity suggest it is indeed an UMP40. It fires full auto but has a rather low rate of fire, though it still is a nice weapon to dispatch large groups of enemies.

The UMP40 rests on the floor, awaiting for the player to pick it up. Both sides of the weapon lack an ejection port.

Holding the UMP40. The HUD suggests that it uses bottle-necked cartridges, which is incorrect for any UMP variant and likely a remnant from Half-Life 2's MP7 and its 4.6×30mm ammo.

The Mossberg 500 SPX shotgun appears in the Prologue and later chapters (in the latter, however, the player only gets to use towards the end of the game). A good gun to quickly put down enemies in close quarters with few shots. One particular SWAT team member is equipped this shotgun, using it to bust open locked doors (realistic to how SWAT teams use shotguns in real life) but also during combat. It has a capacity 8 shells, which would be plausible if the model's magazine tube was made longer.

World model of the Mossberg 500 SPX. "LPA Italy" is written on the rear sight, just like the real steel.

The Mossberg 500 SPX found in a gun case inside the Prologue's house, contrasting with the antique firearms inside it.

The Patient holding the Mossberg 500 SPX.

A SWAT team member with his Mossberg 500 SPX in hand.

During the Prologue chapter, inside the same cabinet where the shotgun is found, a sporterized French Model 1842 Percussion Musket is also seen inside. It is unusable, and the case's model can be also seen in other Source engine games (such as Counter-Strike: Source and Counter-Strike: Global Offensive).

The sporterized French M1842 percussion musket on the left. Note that the percussion lock is incorrectly shown on the weapon's left side.

Along with the musket, a Daniel Fraser & Company Drop Block Single Shot Rifle is seen inside the same cabinet as well. The player cannot use it either.

The Daniel Fraser & Company Drop Block Single Shot Rifle on the right. Just like the musket, it also appears to have been mirrored, with the side lever shown on the weapon's left side.
Retrieved from "http://www.imfdb.org/index.php?title=Nightmare_House_2&oldid=1368224"
Categories: