The following weapons were used in the film Necronomicon:

Policeman with the holstered revolver.

The revolver is seen from the other angle.

Sarah covers with her sidearm.

The Howdah Pistol appeared in the hands of Lena (Millie Perkins) at "The Cold". 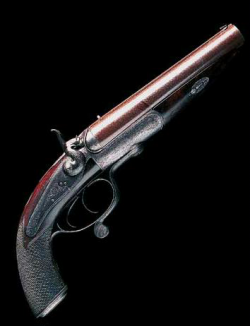 The howdah is seen hanged on the wall.

The hammer is seen cocked.

The front sight and ramrod can be seen.

Scared Mrs. Benedict brandishes her shotgun after firing it.

The shotgun is seen near the chair.