From Internet Movie Firearms Database - Guns in Movies, TV and Video Games
(Redirected from Mummy, The)
Jump to: navigation, search

The Mummy is the 1999 feature film adaptation of the Universal monster character that was directed by Stephen Sommers. Brendan Fraser stars in the film as Rick O'Connell, a former soldier who joins an expedition to investigate the possible existence of a supernatural Egyptian book, which may have the power to unleash a force that exists within the confines of a buried body. The film's cast includes Rachel Weisz, John Hannah, and Arnold Vosloo as the Mummy. The film spawned two sequels: 2001's The Mummy Returns and 2008's The Mummy: Tomb of the Dragon Emperor. The character of the Mummy would subsequently be rebooted as part of a "Universal Monsters" film franchise with a 2017 feature film adaptation starring Tom Cruise.

The following weapons were used in the film The Mummy:

Rick O'Connell (Brendan Fraser) uses a pair of Chamelot-Delvigne Model 1873 revolvers throughout the film. During the fight in Hamunaptra, Jonathan Carnahan (John Hannah) grabs them out of Rick's shoulder holsters and fires them at Imhotep's (Arnold Vosloo) mummified priests.

Rick often dual-wields revolvers and has an unique way of loading them by spinning the cylinders. Maybe if the ejector rod has been pulled back and the loading gate is open, all he has to do is to point the loading gate downwards, using the force of gravity and cylinder spinning to make sure all cartridges are ejected. 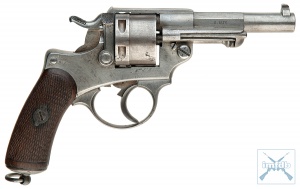 Colt New Service revolver - .45 ACP. The Army adopted a model of the New Service, the Colt M1917, with plain wooden grips and a lanyard ring in the First World War.

Rick O'Connell (Brendan Fraser) and Jonathan Carnahan (John Hannah) use Colt M1911 pistols to battle the attacking Tuaregs. Rick most notably preparing one on the boat to Hamunaptra. Mr. Burns (Tuc Watkins), one of the American treasure hunters, is also seen using a Colt M1911. It should be noted that the screen gun used is a period authentic pre-1924 M1911, not an M1911A1 (noted by the lack of a curved mainspring housing and no relief cuts around the trigger guard on the frame. Also, the grip safety spur is shorter than on the A1 while the actual trigger itself is longer). This is a rare case of Hollywood getting something right.

Many of the Medjai warriors who attack the boat to Hamunaptra are armed with dual Mauser C96s.

A Medjai warrior is shot while firing his Mauser C96s.

On the near right, Jonathan (John Hannah) holds his Remington 1866 Derringer.

Jonathan with his pistol in the foreground.

On the near right, Mr. Burns (Tuc Watkins) reloads his revolver.

Rick armed with his Winchester 1897.

At the beginning of the film, Rick O'Connell (Brendan Fraser), Beni Gabor (Kevin J. O'Connor) and other members of the French Foreign Legion use Lebel 1886 rifles. Normally these rifles hold eight rounds, but the ones used in the film appear to be reloaded after every shot (Fraser does this several times during the course of the opening scene). This is accurate to doctrine of the time; the Lebel was fitted with a magazine cutoff that prevents loading from the magazine, allowing single shots to be loaded and fired. As the Lebel has a tubular magazine that is difficult and time-consuming to load under pressure, and there were concerns regarding excessive ammunition consumption, many military rifles of the period were fitted with magazine cutoffs and soldiers were under orders to load and fire single shots while saving the magazine as an emergency reserve for close combat and assaults.

The Lee-Enfield rifle was extensively used in the film, seen in the hands of British soldiers, the Medjai warriors, and the Tuaregs attacking the French Foreign Legion at the beginning of the film.

Lee-Enfield No.1 Mk III* - .303 British. This was the main battle rifle of British and Commonwealth forces during the First World War, introduced in 1907 it has seen action throughout the 20th century.

On the right, a British soldier with his Lee-Enfield rifle.

The Tuaregs attacking the French Foreign Legion at the beginning of the film are seen using M1895 Chilean Mauser carbines.

A Tuareg horseman armed with a Chilean Mauser.

What appear to be Snider-Enfield rifles are used by the Tuaregs.

Tuareg horsemen charging with their rifles.

Rick O'Connell (Brendan Fraser) holds the Jezail Musket on film poster, although this gun does not appear directly in the film. 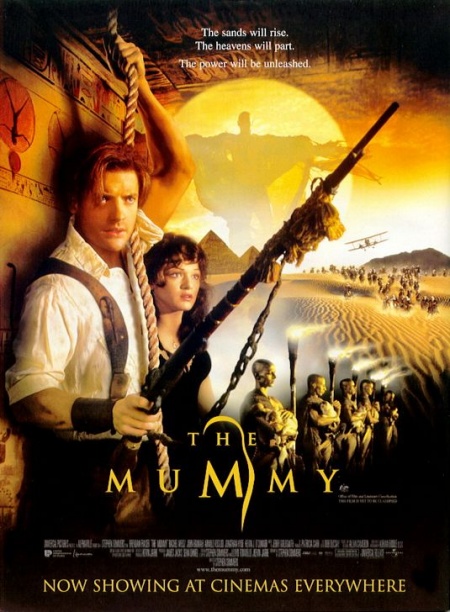 Rick O'Connell (Brendan Fraser) uses a Lewis gun mounted on an airplane to shoot at the face of the sandstorm that Imhotep (Arnold Vosloo) creates. When the airplane crashes, Ardeth Bay (Oded Fehr) unmounts the gun and uses it against Imhotep's mummified priests in Hamunaptra.

Rick with a dynamite stick.

On the boat, Rick displays his pack that's filled with weapons. The pack consists of: