Mosin Nagant M91/30 Sniper Rifle with PU 3.5x sniper scope and down turned bolt handle - 7.62x54mm R. The PU scope on this example is one of the repurposed SVT-40 scopes, 91/30 PU scopes had consistent tube diameter as the mount rings were shorter.

The M1891, over its three decades of production, steadily received revisions to its parts, resulting in many iterations of M1891 configurations. It is important to note that many M91s can be found with a mix of early and late features due to using replacement parts.

Aside from variations of the original Infantry Rifle, the M1891 also features several full-length variants: 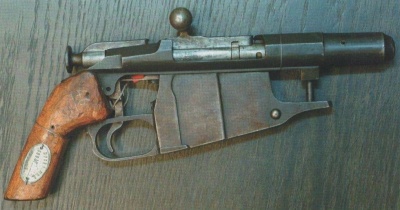