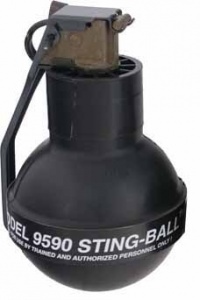 The Model 9590 Sting-Ball Grenade is a type of non-lethal grenade made by Combined Systems under the Combined Tactical Systems brand name. It is a hard rubber fragmentation grenade containing around 100 small rubber balls. Upon detonation, instead of metal shrapnel, the grenade releases rubber fragments and the rubber balls.

The Model 9590 Sting-Ball Grenade and variants can be seen in the following films, television series, video games, and anime used by the following actors: