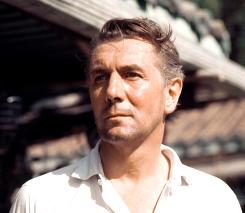 Michael Redgrave (1908-1985) was an English actor who had appeared in such films as The Heroes of Telemark, Oh! What a Lovely War, and Battle of Britain. He also was the patriarch of a generational show business family, which included his children: actors Lynn Redgrave and Vanessa Redgrave as well as his grandchildren: actors Natasha Richardson, Joely Richardson and Jemma Redgrave.