Mayerling is a 1968 movie directed by Terence Young and starring Omar Sharif, Catherine Deneuve and Ava Gardner. The film is based on the real story of Austrian Crown Prince Rudolf and his mistress, Baroness Maria Vetsera, and their tragical death in the hunting lodge at Mayerling in 30 January 1889.

The following weapons were used in the film Mayerling:

A Mle 1892 Revolver is seen in hands of Crown Prince Rudolf (Omar Sharif) when he fires at bottles and mirrors, being drunk. The gun is anachronistic for late 1880s.

The revolver is seen on a screenshot from VHS version of the movie; the DVD version doesn't has such view.

In the final scene at Mayerling Crown Prince Rudolf uses Smith & Wesson Military & Police revolver with 4" barrel that also doesn't fit for 1889 (in reality the revolver used during the Mayerling Incident was a Gasser-Kropatschek). A smaller version in .32 caliber is also possible but less credible as the revolver seems to be large enough for K-frame.

Rudolf prepares to shoot himself.

A pair of similar looking revolvers is briefly seen in Rudolf's apartments. They seem to have folding triggers, and generally resemble Lefaucheux pocket revolvers though it's hard to say if they have open-top frames. 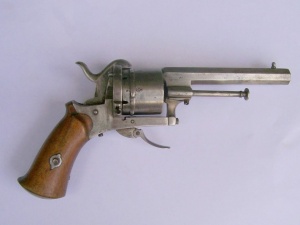 Two revolvers are seen on the table.

The barrel is seen during the assassination attempt.

A plainclothes police agent holds the rifle, taken from the shooter.

A soldier holds his rifle on shooting range (seen at the right).

Crown Prince Rudolf examines an Austrian soldier's rifle. The rifle sling is attached in holes rather than on swivels that match the post-1910 version of the M91 Infantry rifle.

During the street riot in Vienna some soldiers carry rifles that appear to be original Mannlicher M1895s, standing for M1886 version.

The barrel of Mannlicher M1895 is seen at the right.

Another view of Mannlicher M1895 at the right.

Full-length rifle is seen in hands of a soldier at the background. It is fitted with a short sword bayonet and seem to have protruding magazine so it's most likely M1895.

During the riot in Vienna most soldiers carry Mannlicher M1895-style short rifles. The front sights with large protectors allow to identify them as Hungarian 31M version (also known as M95/31).

Short rifles are seen in center.

A good view of a short rifle in center.

Same short rifles are seen in center (protected front sight can be seen) and at the right.

Emperor Franz Josef (in center) and Albert Prince Of Wales (at the right).

Rudolf aims at a deer.

During the maneuvers of Austro-Hungarian army field cannons are seen. They appear to be anachronistic Russian 76.2mm M1902. The barrels are extended with tubes that are most likely used for placing pyrotechnical charges.

It fires. No recoil is seen, so the muzzle flame must be a result of pyrotechnical charge.

A battery of field artillery.

A gun on march.
Retrieved from "http://www.imfdb.org/index.php?title=Mayerling&oldid=1361880"
Categories: