Ludwig II is a 2012 German biographical movie directed by Peter Sehr about Ludwig II, Swan King of Bavaria. Ludwig II dreams of a better world at a young age. The highly gifted soul of the artist believes in the refinement of people through art and music. He wants to substitute musical instruction for the people in the place of military service and uses his power and the money of the state to implement his high ideals of education and culture. But the world around him keeps turning normally and the kingdom is threatened from the outside by wars with Prussia and France. In domestic politics, the ministers ally against the king and his plans. Even in love, Ludwig fails, because the relationship with his fiancée Sophie does not go beyond friendship. Deeply distraught, he withdraws from the political public and flees from the bitter reality, until he dies under unexplained circumstances.

Another movie directed by Luchino Visconti with an almost identical plot was released in 1973.

The following weapons were used in the film Ludwig II:

Richard Hornig (Friedrich Mücke) can briefly be seen with a Lefaucheux Model 1858 revolver after Bavaria's defeat during the Austro-Prussian War in 1866. 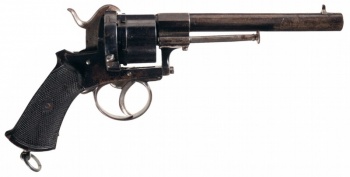 He fires the revolver after each firework rocket to pay his respect to the fallen.

Bavarian soldiers standing with their carbines which shortly thereafter are exchanged by young cadets with Dreyse rifles. The distinctive muzzle is perfectly seen on the left.

A cadet to the right puts the carbine to the rack lock.

Several unused carbines with fixed bayonets plugged together during the demonstration.

"I knew it, he will enchant everyone."
The carbine's muzzle is seen on the right next to Lorenz Mayr (Samuel Finzi) describing the coronation of Ludwig.

The Dreyse Model 1841‎ Infantry Rifle is seen used by Bavarian soldiers during the demonstration of the Prussian Army Wunderwaffe. Prince Otto (Tom Schilling) takes a rifle from a soldier and fires the Dreyse as well. Luitpold, Prince Regent of Bavaria (Uwe Ochsenknecht), says about these weapons: "This Needle Gun is a stroke of genius. Even from a thousand steps, you can still hit the enemy in the heart. BANG, and quickly reload again and BANG!". Maximilian II (Axel Milberg) wants to buy this rifle but after his death, Ludwig decides not to equip his troops with this rifle.

Three Dreyse M/41s to the right stacked together at the shooting range.

The Bavarian soldiers who previously demonstrated the moderate accuracy of the Lorenz carbine fire their rifles.

Impressed by the accuracy of this wonder weapon, Prince Otto euphorically tries it out himself.

Johann von Lutz (Justus von Dohnányi) and Otto von Bismarck (Bernd Birkhahn) use bolt action rifles while hunting. They appear to be the Mauser Scheibenbüchse, a bolt-action target rifle based on the Mauser Gewehr 1871 system. Bismarck's rifle has a turned-down bolt handle.

He leaves the hunting spot with the rifle over the shoulder.

Bavarian police and some of Ludwig's guard can be seen with Werndl M1873/77 rifles. These Austrian rifles may stand in for the correct Bavarian Werder-Gendarmerie-Gewehr M/1869/1873.

The barrels of the same rifles are seen pointed at Richard Hornig.

A unit of Bavarian police in front of Neuschwanstein Castle armed with Werndl rifles facing Ludwig guards who are still equipped with outdated Lorenz carbines.

After taking aim, the unit received the order to cock the hammers.

The police carrying their Werndls over their shoulders arrest Ludwig on June 10, 1886.

The cannons in the background.

Several cannons on a battlefield following an engagement.