The LC-T1-M1 was built by the Brazilian company Hydroar for the Brazilian army in 1984 to serve as a replacement for the WWII era M2 Flamethrower. it is comprised of two units: the tank group and the gun group. the tank group works in a similar way to the M2 Flamethrower, the two vertical tanks are filled with fuel and the single horizontal tank is filled with inert gas at high pressure. A regulator is then used to supply a constant pressure of 250-350psi to the two fuel tanks. The gun group is operated by first pressing the front trigger to engage the igniter, then the rear lever is pushed forwards to discharge the fuel. One of the ways in which the system differs from the older M2-2 flamethrower is that the igniter is entirely electronic. It's powered by 8 1.5 volt alkaline batteries passing through a transformer to generate 20,000 volts. This creates an electrical ark between two electrodes placed either side of the nozzle. reportedly the igniter can be used up to 1,000 times before the batteries have to be replaced. 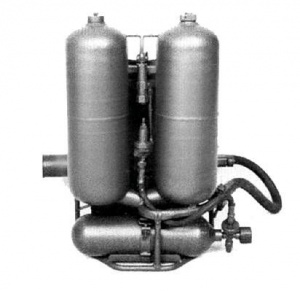 Gun Group, the batteries are stored in the compartment labeled B