King Solomon's Mines is the 1985 feature film adaptation of the popular 1885 adventure novel written by H. Rider Haggard. Richard Chamberlain stars as the big game hunter and trader Allan Quatermain and Sharon Stone as Jesse Huston. The plot revolves around the duo in their search for Miss Huston's father and the legendary (and lost) King Solomon's Mines. The film was directed by J. Lee Thompson and produced by the low budget Cannon Films studio and for budgetary reasons, made back-to-back with the 1987 sequel Allan Quatermain and the Lost City of Gold.

The following weapons were used in the film King Solomon's Mines (1985): 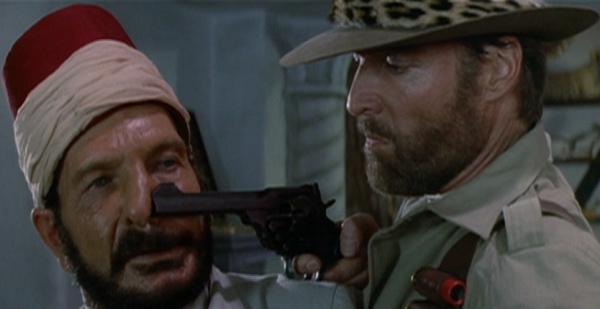 A closeup of Quatermains gun after he drops it

Dogati points his own Webley gun at Quatermain.

Quatermain carries a trademark sawed off shotgun of unknown type. 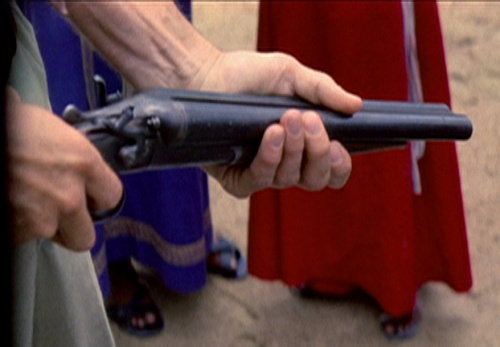 Quatermains Sawed off shotgun seconds before he fires it.

The German soldiers and African rebels use a FN MAG machine gun heavily modifed to look like machine guns of World War 1.

African Rebel machine gun. Note the charging handle which neither the German or British contemporary machine guns did not have. The barrel is also at the center of the "water jacket" which is incorrect. A real German Maxim 08 or British Vickers respective barrels were at the bottom of the water jacket. Also note the FN MAG carrying handle sticking out on the right side.

Another example of a mockup FN MAG. Note the centralised gun-barrel in relation to the water jacket which is incorrect for a historical WW1 era machine gun.

The main villain Dogati (John Rhys-Davies) uses a FN FAL mocked up to look like a World War 1 Lewis light machine gun. Dogati fires the weapon fully automatic. The movie was filmed in Zimbabwe, which was formally the (British armed) country of Rhodesia so there were probably no lack of FN FAL derivatives due to its popularity in that country and that continent in general.

FN FAL with wooden stock. Used as a template for the mockup shown in the movie

Dogati firing the fake Lewis Gun. Note the magazine inserted at the bottom which is a dead give-away the gun is not a genuine Lewis Gun. The movie armourers also fitted a Lewis style rear sight. 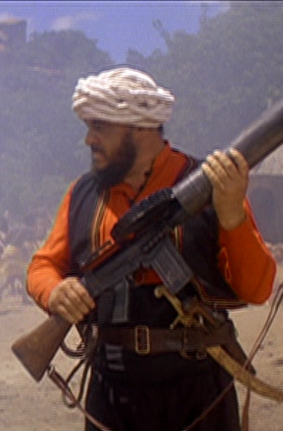 The Lee-Enfield No.4 Mk.I 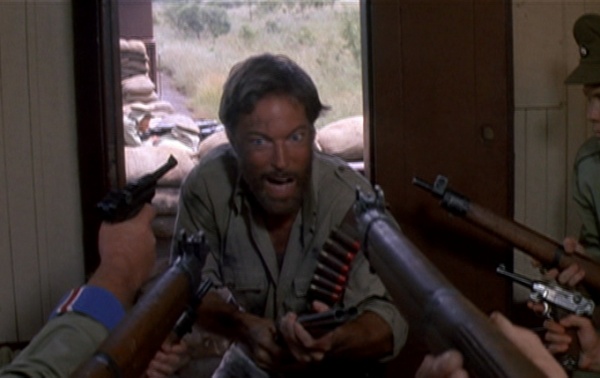 Quatermain realises he has entered the wrong railroad car.

German soldiers and African rebels are seen using a light mortar throughout the movie.

Mortar being fired by the Germans.

Mortar being fired by the African rebels.