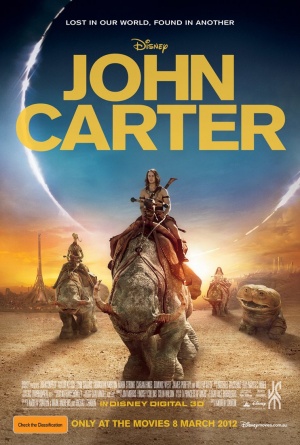 The following weapons were used in the film John Carter (2012):

John Carter (Taylor Kitsch) is seen pulling a Colt 1851 Navy revolver on the bartender at the film's beginning.

Carter is also seen holding a Colt Dragoon pistol when facing down Apache Indians. Some Apaches are also seen with these revolvers.

John Carter (Taylor Kitsch) is seen with the Colt Dragoon.

The bartender attempts to pull a double barreled Percussion Shotgun from behind his counter before Carter can pull his revolver.

The Percussion shotgun is seen being reached for.

The shotgun on the table.

The Spencer 1860 Carbine is seen in the hands of several of Powell's cavalry troops as well as Apaches.

An Apache is briefly seen with a Springfield 1861 musket.

The musket is seen on the far right.

Many tharks (Green Martian clan) uses the Thark Martian rifles at the many scenes.

Prop Image of the rifle

Thark fires his rifle at the final battle.