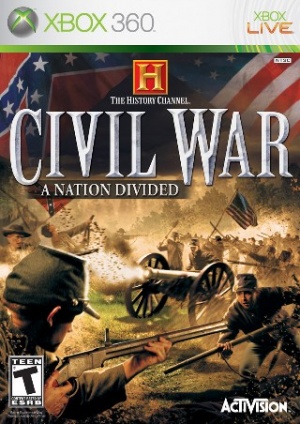 The History Channel: Civil War - A Nation Divided is a 2006 first person shooter videogame developed by Cauldron HQ and released under the Activision Value brand. Unlike most first person shooter videogames of then up to now, The History Channel: Civil War - A Nation Divided actually makes a very good attempt at being an authentic, historical representation of the war that it is based on with in-game cutscenes and levels that describe and showcase the American Civil War's greatest battles between the Union and the Confederacy (Such as Chancellorsville and Gettysburg), giving players the option of choosing to play as either a Union or a Confederate soldier, and actually making an attempt to showcase authentic, reloading animations for the weapons that were common in that period. Despite a few weapon flaws and some very minor historical goofs here and there, this game is regarded as being more historically accurate than other historical-based first person shooters out there. A sequel, History Channel Civil War: Secret Missions, was released in 2008.

The following firearms were featured in the video game The History Channel: Civil War – A Nation Divided.

The Colt Army Model 1860 was the standard pistol of Civil War as well as in the game and is a single-action six round handgun. An interesting note is that during the reloading sequence in the game, percussion caps are never put on but the gun fires away. 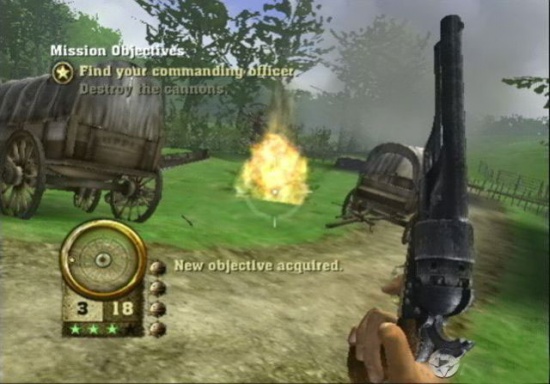 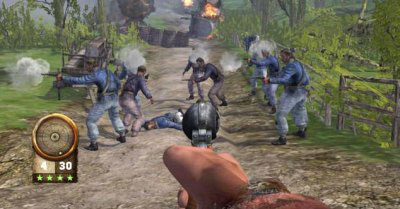 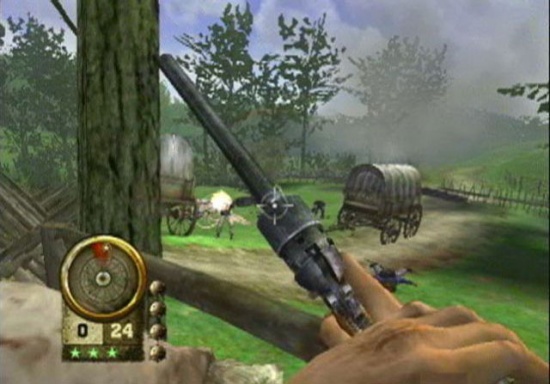 Cocking the Hammer in free aim.

Similar to the Colt, the Remington Model 1858 was Colt's primary rival during the Civil War and the main technical advantage it had over the Colt was its quick loading system which could be achieved by just swapping out the cylinders and locking them in place.

The Springfield Model 1861 was the primary shoulder rifle during the Civil War. It was a single-shot, percussion based, rifled musket. The rifle has a fixed bayonet and like the goof with the Colt 1860 Army, the gun is fired without a percussion cap being placed during reloading. Another note is that the Enfield Model 1853 does not appear in the game, despite the fact that it was the second most widely used shoulder rifle of the Civil War, and both sides used them in significant quantities. 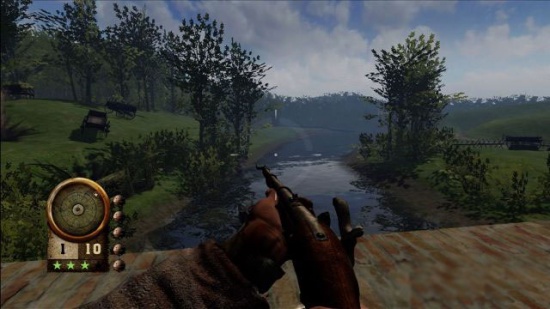 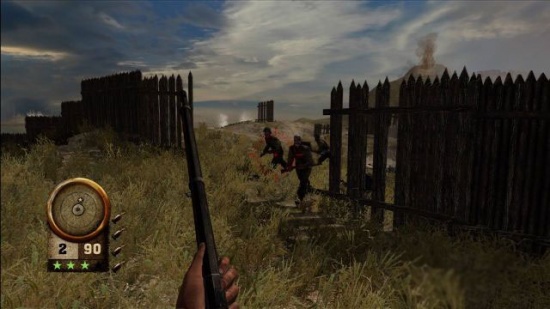 Springfield Musket preparing to be reloaded

The Sharps 1855 was a breech-loading, falling-block action rifle that was very popular during the war, especially with the cavalry. In the game, an infantry version with a fixed bayonet and a sniper version with a scope exists. Although the latter weapon would be used by specialist soldiers on both sides rather than the common infantryman. 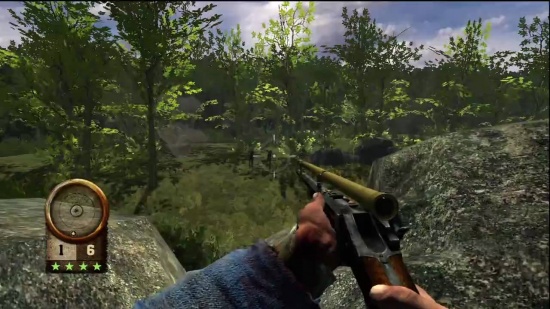 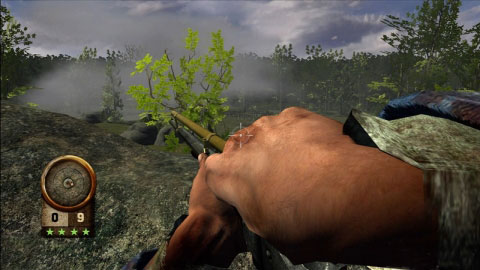 The Colt Model 1855 revolving rifle is one of the first weapons acquired in the game. In the game, the gun is seen being used as a standard-issue weapon, when in reality, it was the complete opposite. More often than not, the hot gases released from the cylinder during firing often ended up igniting the charges (since they were paper charges that were easily flammable) in the other cylinder chambers, causing the gun to discharge the rounds into the gun and the shooters' hand, which would cause serious injury or death. Because of this, the Army decided to withdraw it from service in the early stages of the Civil War. 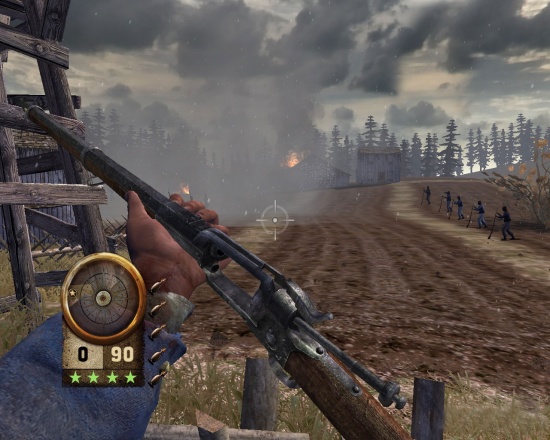 The Colt 1855 is seen being reloaded by changing the cylinders. 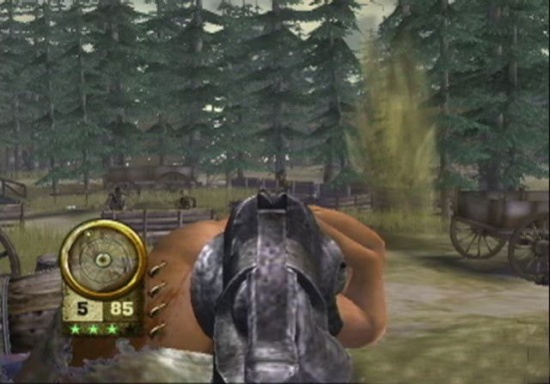 The Spencer 1860 Carbine was an extremely popular weapon during the Civil War. It held 7 shots and could be fired very rapidly, accurately, and reliably. The game does a good job at representing the rifle, but during reloading, the magazine is entered and fired without a round being chambered. 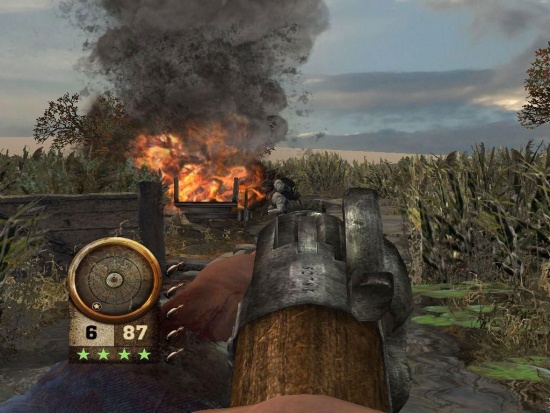 Staring down the 1860 Spencer's iron sights. 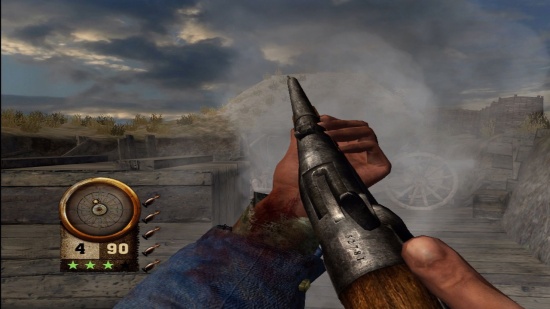 The 1860 Spencer as shown being levered.

The Henry 1860 rifle was perhaps the most revolutionary gun of the time and was the direct precursor to the Winchester rifle. In the game, it shown being used in very early to very late battles as a standard issue weapon. When in reality, the Henry was never issued to regular troops and was used more by the soldiers who purchased it with their own funds.

The Gatling Gun was the world's first practical machine gun that was invented in 1863, and saw great usage near the end of the Civil War. Alongside the 9 Lb. Howitzer, it is the only other weapon that can be manned and has a rather slow firing rate and infinite ammunition. Another goof is that the gun is never shown jamming in-game, as how it happened a lot with the real life Gatling Gun on the battlefield due to the gun's lack of a cooling system.