The Hi-Standard Double Nine Revolver can be seen in the following productions: 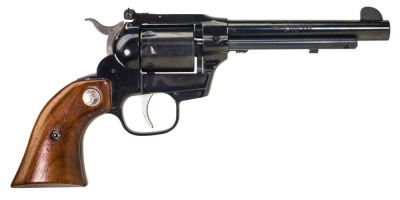 The High-Standard Double Nine revolver is a double-action nine shot Western style revolver introduced in 1958. The original revolver had an aluminum frame, a rebounding hammer, and barrel lengths between 3.5 inches to 9.5 inches. The model was available in both blue and nickel finish, and the grips were either white or black plastic, faux stag or walnut. High Standard manufactured a number of variants of the Double Nine; originally the Longhorn, Natchez and Posse, and later the Hombre, Durango and Marshal. They were distinguishable by different features (example: the Natchez had a "birds head" grip and 4.5" barrel). Sears sold the gun as the J.C. Higgins Ranger or Model 90, and later also as the Ranger De Luxe. High Standard also made western style revolvers for Western Auto and Kroydon Arms. In 1971 High standard introduced a new version of the Double Nine (the W106 series) that had a steel frame which was strong enough to be used with .22 Magnum rounds. This model series was collectively known as the Convertible and came with two separate cylinders for use with .22 LR and .22 Magnum. These guns were available in the later variants along with the new High-Sierra, and were the first models available with adjustable sights as an option. The Double Nine was discontinued in 1984. Mechanically the Double Nine was the same as the Hi-Standard Sentinel Revolver, meaning that unlike the Single Action Army on which it was aesthetically based it had a swing-out cylinder therefore the ejector rod and housing (on those models fitted with it) was purely ornamental.