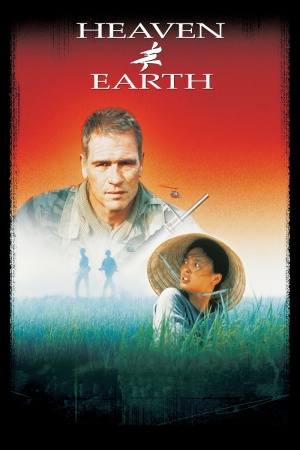 Heaven & Earth is a 1993 Vietnam War film directed by Oliver Stone and based on the life of Le Ly Hayslip, who wrote about her experiences growing up as a young Vietnamese woman throughout the different phases of the war. The film was part of director Oliver Stone's unofficial "trilogy" of Vietnam War-themed films which included 1986's Platoon and 1989's Born on the Fourth of July.

The following weapons were used in the film Heaven & Earth:

The M16A1 fitted with a suppressor is seen in the hands of Gunnery Sgt. Steve Butler (Tommy Lee Jones).

M1 Carbine on the left.

A government soldier carries the M1 Carbine while chasing down suspected VC.

M60 machine guns can be seen mounted on US Army helicopters throughout the film.

M60 machine guns can be seen mounted on a US Army helicopter carrying Butler.

M60 seen as a doorgun on the Huey as Le and her children board.

Government soldier mans the M2 mounted on the M48 tank.

When government troops enter Le's village, an American advisor is seen with a Carl Gustav M/45.

Carl Gustav on the left.

Some government troops and VC fighters are seen armed with the M1A1 Thompson.

On the right, the Thompson carried by VC fighter.

A government soldier in the center with the Thompson.

The M3A1 "Grease Gun" is seen carried by both VC fighters and government soldiers.

The Grease Gun in the top left.

Gunnery Sgt. Steve Butler (Tommy Lee Jones) is seen with two M1911A1 pistols while in an argument with Le. An Army captain also carries an M1911A1.

A US Army advisor carries the pistol while chasing down suspected VC.

Gunnery Sgt. Steve Butler (Tommy Lee Jones) is seen with two M1911A1 pistols while in an argument with Le.
Retrieved from "http://www.imfdb.org/index.php?title=Heaven_%26_Earth&oldid=918282"
Categories: