The Happening is a 2008 psychological thriller/horror film written, produced, and directed by M. Night Shyamalan. The film stars Mark Wahlberg as science teacher Elliot Moore and Zooey Deschanel as his wife Alma, who find themselves trying to survive a mysterious event that is causing people across the Northeastern United States to inexplicably commit suicide.

The following weapons were used in the film The Happening:

A Colt M1911A1 or similar variant is briefly seen when survivalists in Fairfield, Nebraska load up weapons. 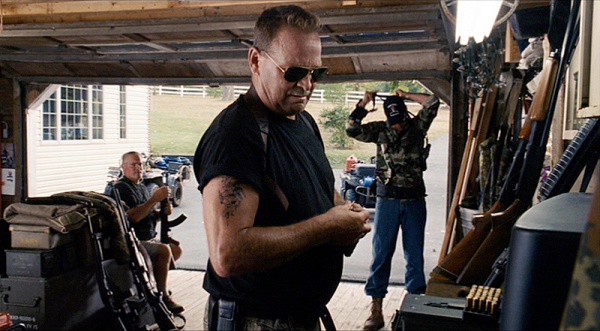 The man to the right adjusts a shoulder holster containing an M1911-style pistol.

A Philadelphia police officer uses his duty sidearm, a SIG-Sauer P226, to kill himself when the event affects Rittenhouse Park. This pistol is picked up and used by others to commit suicide. A P226 is also used by a U.S. Army military policeman, PFC Auster. This is incorrect- while some SIG-Sauer P220 series pistols are issued in the United States military, they are extremely limited, and it is unlikely that a common military policeman would have them. Instead, a military policeman, or any of the other military branches' police units (i.e. USN master-at-arms, USAF security forces) would be equipped with the standard Beretta M9 pistol. 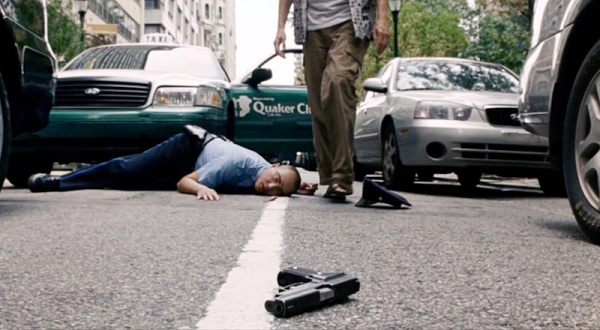 A Philly cop lies dead, his SIG-Sauer P226 lying on the ground. 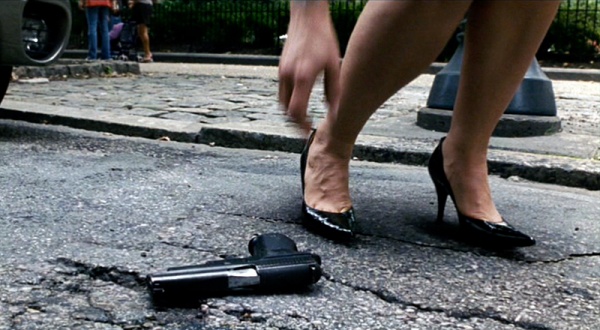 When the gun is used again to commit suicide, a nearby woman picks up the pistol to use it on herself.

An unidentified man inside an old house uses a Mossberg 500 Field Shotgun to shoot a teenager who joined Elliot's group when he tries to break into their home to search for food. 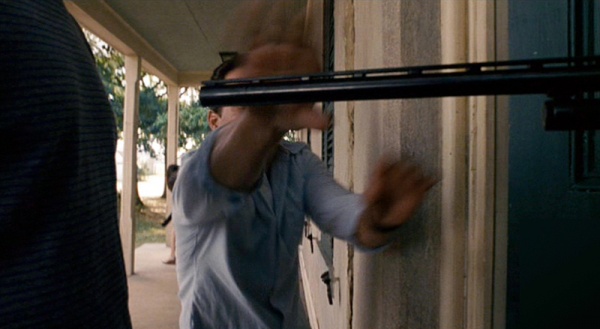 Elliot Moore (Mark Wahlberg) rushes to stop a Mossberg 500 Field Shotgun from shooting Josh (Spencer Breslin). The magazine end cap and the barrel mount tips off the Mossberg ancestry. This version has a 28" ribbed field barrel. 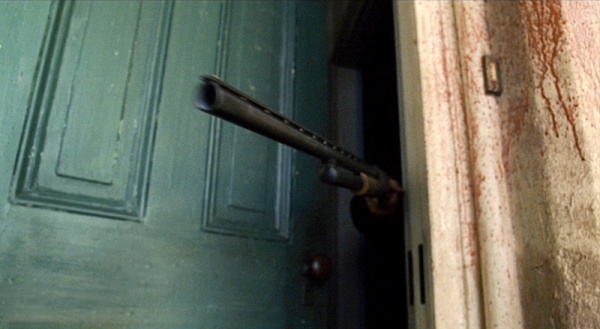 The Mossberg 500 Field Shotgun after getting guts all over the doorframe.

In Fairfield, NE, a Remington 870 Field Gun with ribbed 28" barrel and sporting wood leans against a wall.

The Remington 870 is the second shotgun at the right.

A Smith & Wesson 916A is seen in the survivalists' arsenal.

The S&W 916A is on the right, the closest shotgun to the camera.

A Winchester Model 1300 is also seen in the garage.

The Model 1300 is at the left, leaning against a crate.

During the segment showing men loading weapon in Fairfield, Nebraska, one of the survivalists sitting near a cooler loads an AK-type rifle.

The man to the left locks and loads an AK-47 variant.

One of the men in Fairfield, Nebraska loads an AR-15-style rifle. It is a heavy barreled 16" carbine that doesn't have the step down found on the M4-style barrels. It is seen only very briefly, preventing more specific details from being made out. 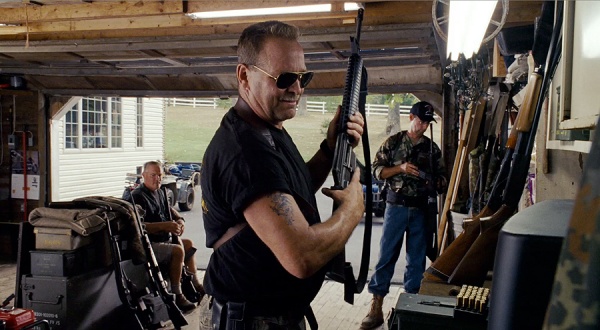 The man to the right loads a magazine into his AR-15-style rifle.

While the survivalists arm themselves in Fairfield, Nebraska, they watch the crisis unfolding on a television set. An M1 Carbine with parts from the Iver Johnson Enforcer Pistol (with late model heat shield and wooden foregrip) is seen on a table near the television. A second Enforcer-style M1 Carbine is seen leaning against a trunk near the cooler. 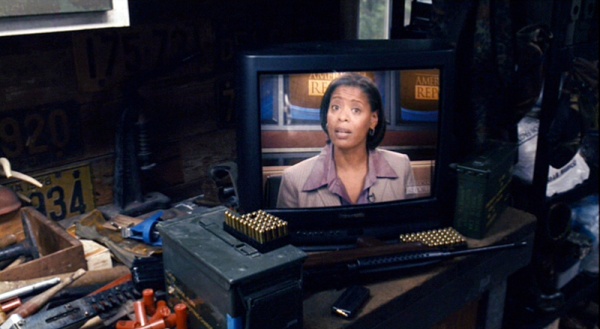 An Iver Johnson M1 Carbine (with an Enforcer pistol stock) is seen on the table, surrounded by ammunition boxes and shotgun shells.

One of the men locks and loads an MGC M16 replica rifle updated with an A1 "birdcage" flash hider, A2 handguards, and a 30 round magazine.

The man closest to the television set locks and loads an MGC M16 Replica rifle with A2 Handguards. The fake forward assist is the giveaway.

An unidentified rifle is seen in the survivalists' arsenal. Like several other weapons in the scene, it is seen very briefly and impossible to identify.

The rifle is seen leaning on a crate, to the right of the M1 Carbine pistol.

The man holding the AK-47 in Fairfield also has a bull-barreled rifle near his legs. Again, it is impossible to identify anything other than the general type of weapon.

The man to the left holds an AK and an unidentified bolt-action rifle.

An unidentifiable rifle is used by another survivor in the boarded-up house visited by Elliot's group. It appears to be a heavy barreled .308 rifle of some sort with no front sights. Being that we only see the end of the barrel, it could be anything from a Remington 700 to a Thompson Center Arms Contender Rifle. 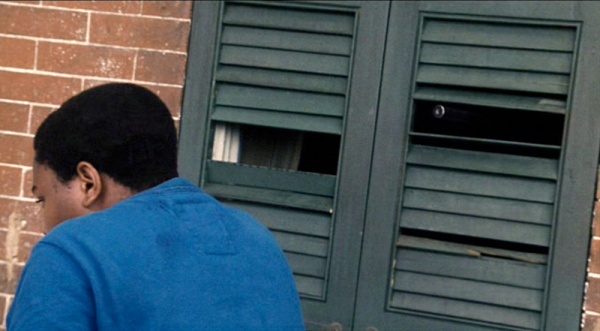 A survivor pokes the barrel of an unknown rifle out of a window and prepares to shoot Jared (Robert Bailey, Jr.).
Retrieved from "http://www.imfdb.org/index.php?title=Happening,_The&oldid=1413734"
Categories: