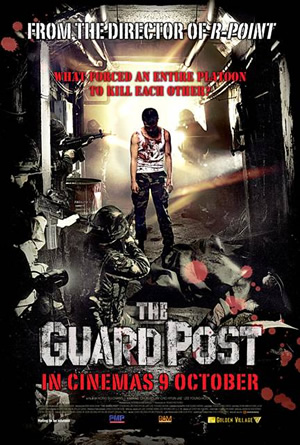 The Guard Post is a 2008 South Korean horror film that examines the story behind the mysterious decimation of an entire platoon located at Guard Post 506 (GP506) near the DMZ, a border between North and South Korea.

The following weapons were used in the film The Guard Post:

The Daewoo K5 pistol is seen carried mostly by Sergeant Major Noh and Staff Sergeant Yoon. It is also seen in the flashback in a fight between First Lieutenant Yoo and the medic, where Yoo uses it to shoot the medic in the head. 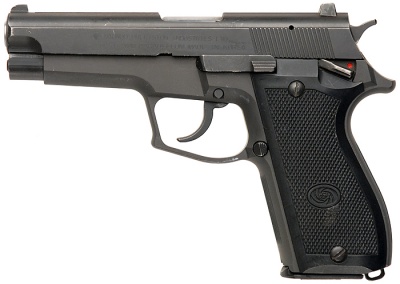 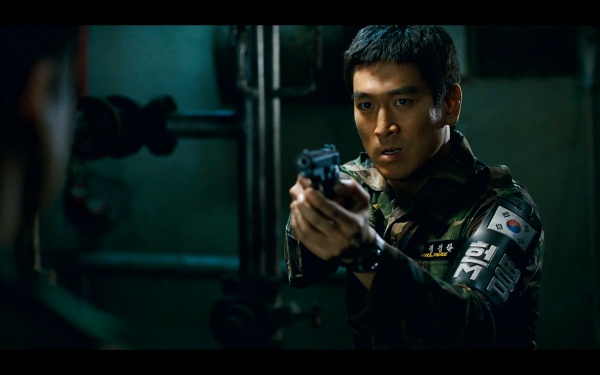 The medic holds the K5 on Staff Sergeant Yoon. 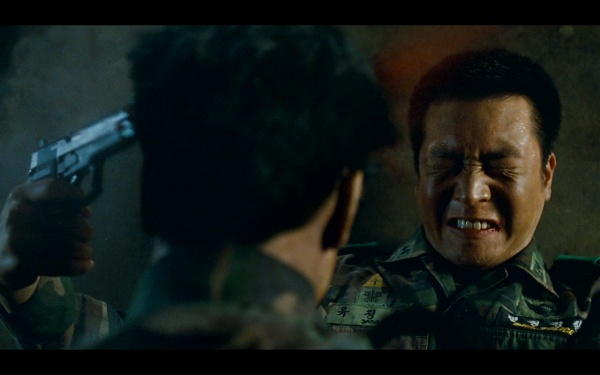 Yoon blows the contents of the medic's head with the K5. The Daewoo K5 (DP-51) has a SA/DA system similar to Beretta M9 series 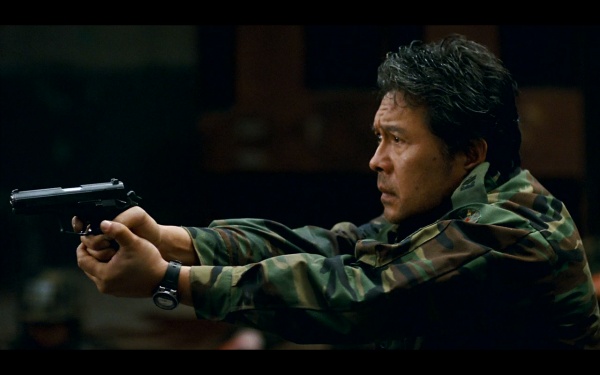 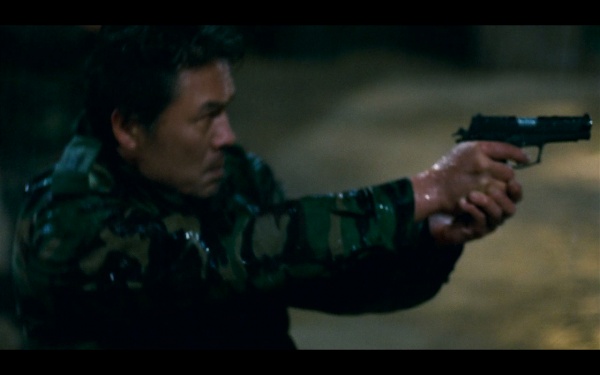 Noh aims his Daewoo K5 (DP-51). Note the chrome barrel and ejection port, a unique aspect in all K5 pistols. 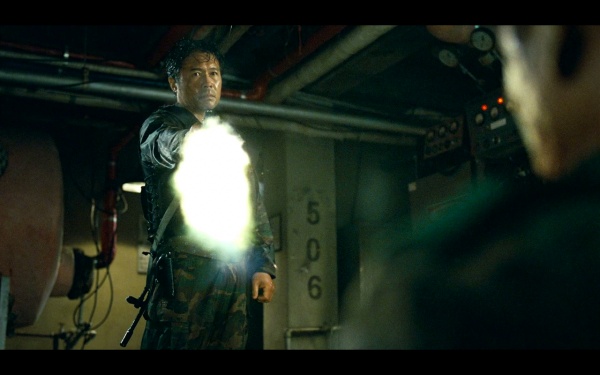 Noh fires the Daewoo K5 (DP-51). Apparently he is aiming at a different angle due to safety issues with firing blanks at a close distance.

Dong-San K1, airsoft replica of the Daewoo K1A, is seen carried by several soldiers in the film but is never seen up close or being fired. The difference from the actual Daewoo K1A can be seen by the lack of take-down lever behind the rear-sight, square pistol grip, larger and rounder trigger guard, higher bolt placement, straight bolt-handle, and the lack of magazine fence. 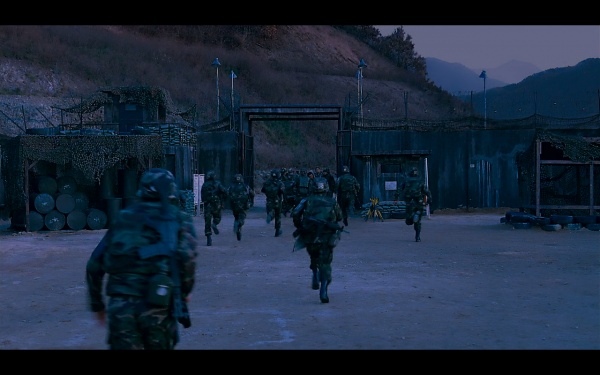 The soldier in the middle has a Dong-San K1 slung to his back standing in for the actual Daewoo K1A. 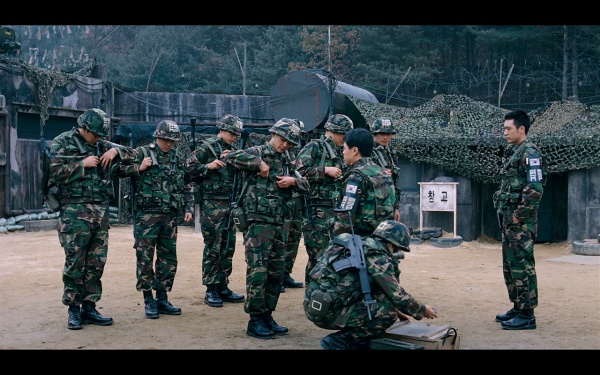 The soldier crouching has the K1 slung to his back with the stock extended. Note the larger trigger guard, squared pistol grip, higher bolt placement, and the lack of take-down lever behind the rear-sight, showing that it is an airsoft K1A replica, not an actual Daewoo K1A

The Daewoo K2 is the weapon that is shown the most in the film, and is used by all South Korean soldiers in the movie, as it is the main assault rifle of the Republic of Korea Army. The weapon is seen with both rail system and optics on and without. Almost all of the optics and rails used are manufactured by the South Korean Dong-In Optical Company. 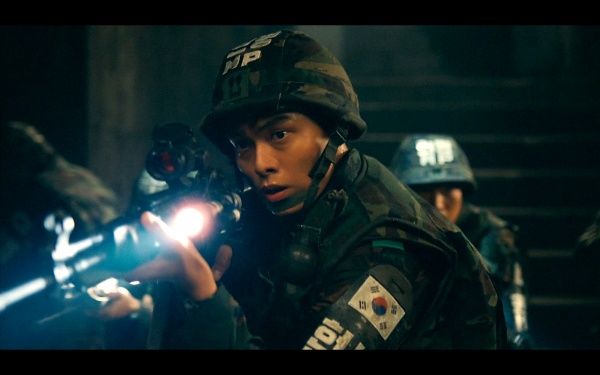 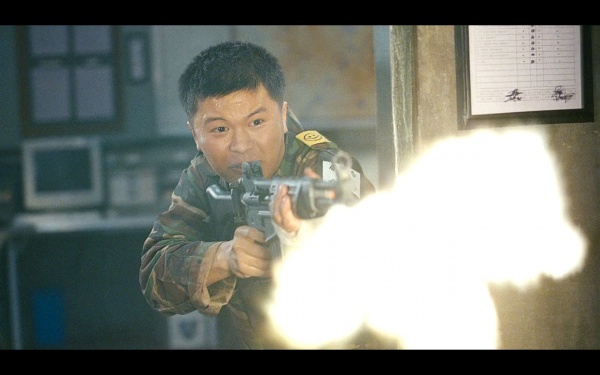 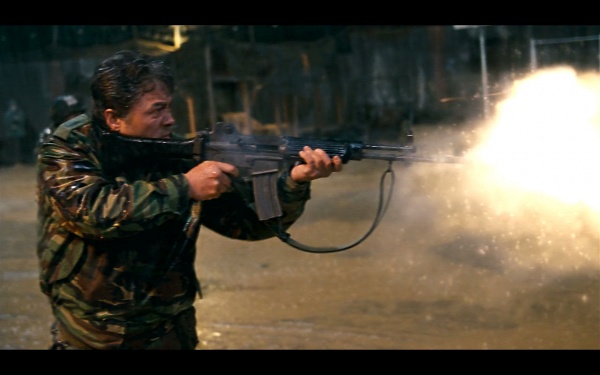 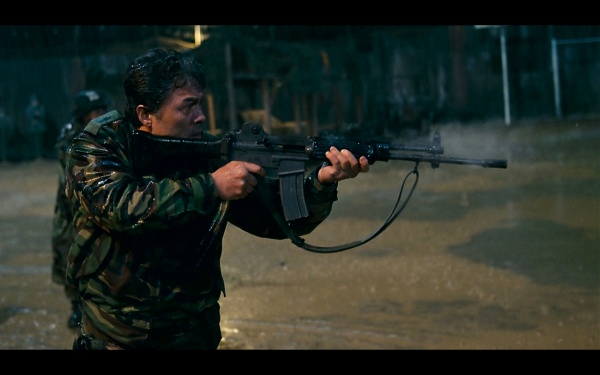 The bolt of the K2 locks back after emptying its magazine. The Daewoo K2 has a bolt-catch mechanism similar to that of AR-15 series. 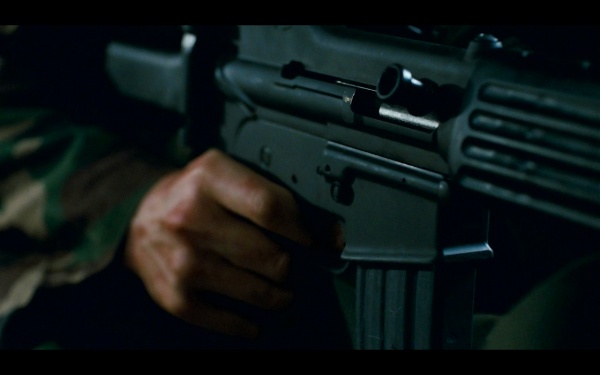 A very well shown capture of the receiver. Note the angled bolt-handle. 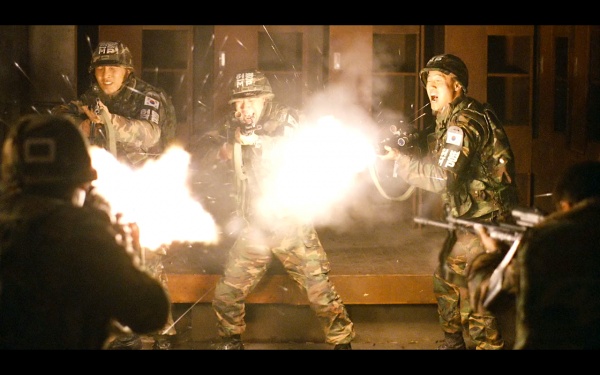 The South Korean policemen firing Daewoo K2s at each other. Note how these actors are just few meters away, which is still a dangerous distance even for blank-firing firearms. 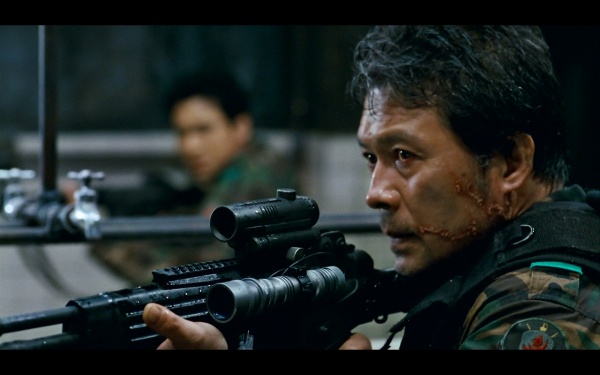 A well shown capture of the optics, which are all Dong-In Optical Co.'s T3 dot sight, K2 Rail system, and weapon-light. 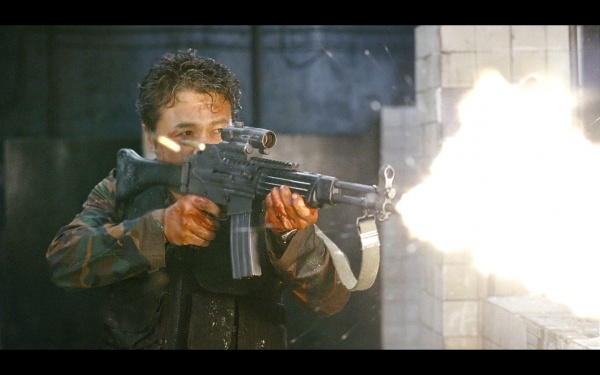 Sergeant Major Noh firing the K2. Note the flying brass, which happens to be blanks. In this sequence, he doesn't shoulder the stock but fires with incredible recoil-control. He also doesn't even blink when he fires!

When the actors aren't firing blanks, they are mostly seen with Ja-Seng K2 airsoft replicas, which would be much lighter and safer for the actors to handle, and can be used without an armorer present on the set. The difference from the actual Daewoo K2 rifle can be seen by the straight bolt-handle, smaller rear-sights, awkward-shaped folding-stocks, thinner front-sights, lower bolt placement, smaller bolt, gap between the receiver and the hand guard, and the lack of swing swivels on the lower barrel.

Trivia: The Ja-Seng K2 airsoft replicas are all-plastic, scaled-down, pump-action airsoft replicas. They are known for their bad quality: lacking bolt, smaller scale, and bad details. It is quite amazing how the prop-designers of this movie improved the quality of these airsoft replicas up to this much. 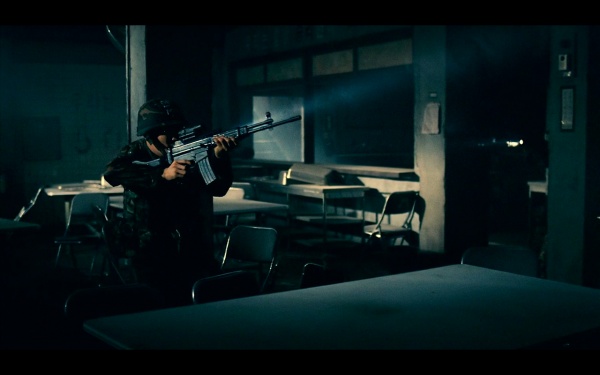 A South Korean MP soldier scans the area with Ja-Seng K2 airsoft rifle. Note that it has Dong-In Optical Co.'s K2 rail system and a T3 dot sight, which would not be possible to put on the normal Ja-Seng airsoft replica. The armorers somehow managed to attach rails on these airsoft replicas. 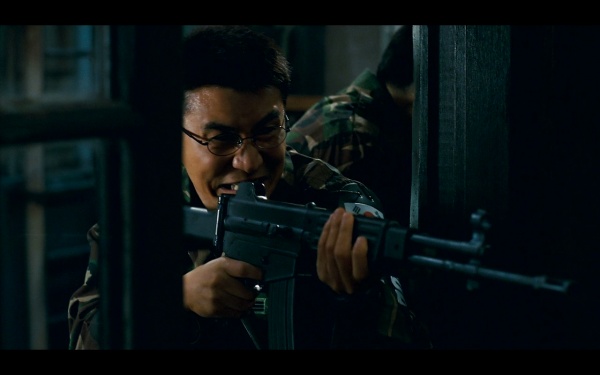 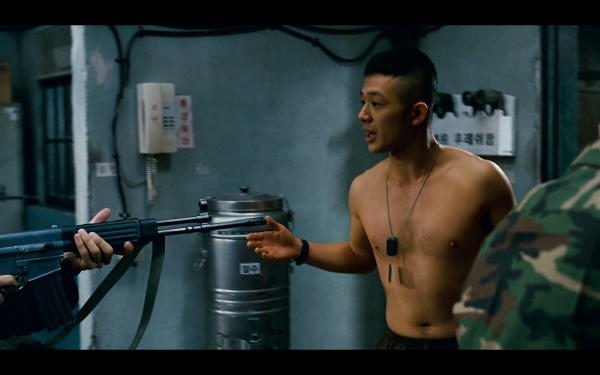 A South Korean MP soldier holds the Ja-Seng K2 airsoft rifle on another soldier. Note the shallow bolt, straight bolt handle, lack of sling swivel, huge gap between the receiver and the hand guard, and the overall smallness of the rifle. There is also a hole in the hand guard, which was originally for the pump-action system of the typical Ja-Seng airsoft replicas. 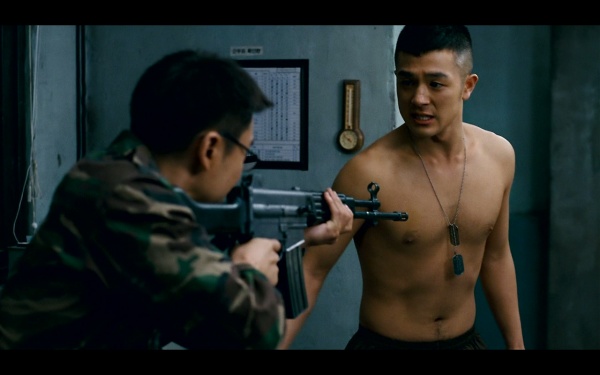 A South Korean MP soldier holds the airsoft replica on another soldier. Apparently, he can't aim down the sights because the stock is too short, being a scaled-down model. Note the thinner front-sight and smaller rear-sight.

A mocked up M60 machine-gun can be seen when Corporal Kang is explaining about the North Korean GP 300 meters away to two newcomer privates. He accidentally discharges the weapon, which results in a burst of machine-gun fire from the North. Corporal Kang shows the M60 to the newcomers, calling it as the machine-gun that came out in the movie "Rambo". However, this M60 seems to be a fake M60 with front-sight taken from AR-15 series and a thick cylindrical part of the barrel sticking out of the hand guard. The gun also apparently fires from a closed-bolt position, where as actual M60s fire from an open-bolt position. It also apparently does not eject ammunition belt links when it fires. It is unsure, however, what the base-weapon of this M60 mock up is. 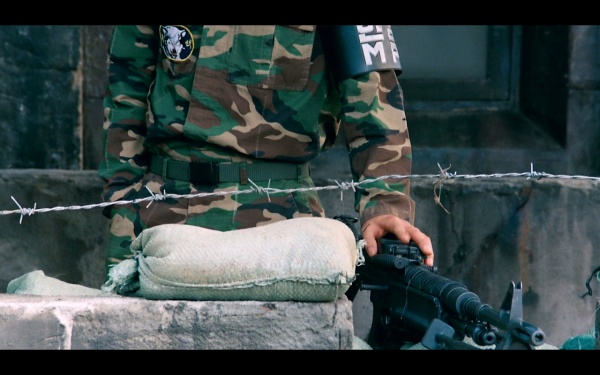 Front view of the M60 mock-up. It has an AR-15 type front-sight and a think barrel portion sticking out of the hand guard. 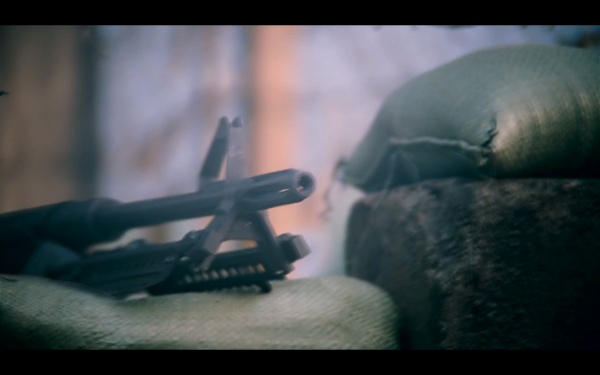 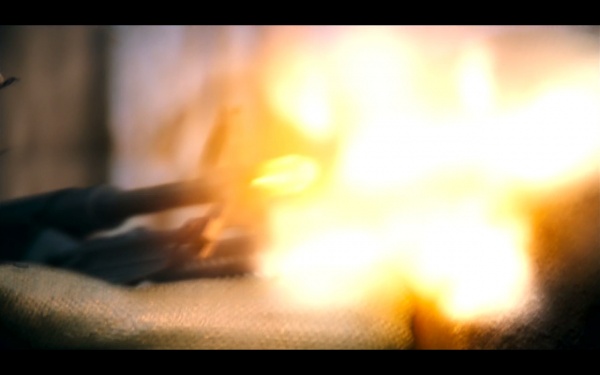 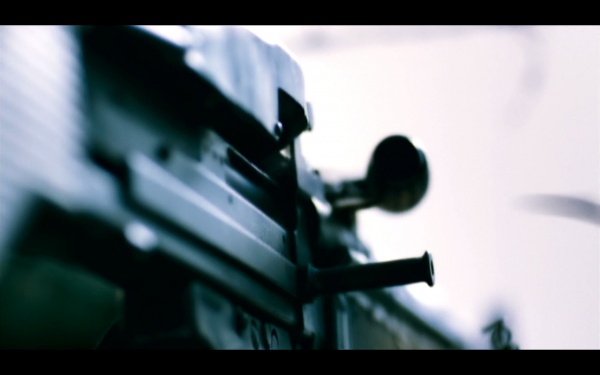 Fake M60 being fired. The belt links do not eject in this sequence although the brass ejects. Also the gun fires in a closed-bolt position, while the actual M60 fires in open-bolt position.

The K400 grenade can be seen equipped on soldiers throughout the movie. It is used at the very end scene where it is used as a booby trap that blows the entire GP506 complex. It is a South Korean made hand grenade developed in 1975, and is still in use, although in some platoons it is being replaced with the K413 hand grenade, a smaller and lighter variant of the K400 but has the same lethal range of about 10-15 meters. The design is inspired by the M67 hand grenade, although the design has changed to be more lethal and able to be thrown further, and to produce about 1,300 fragments when detonated. 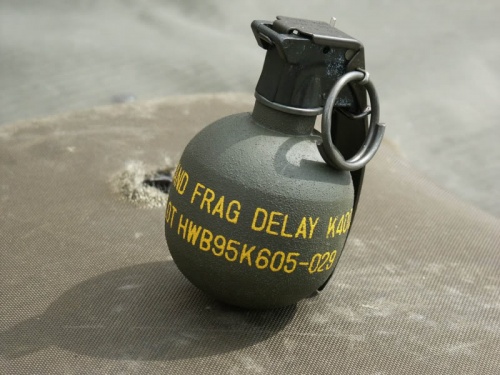 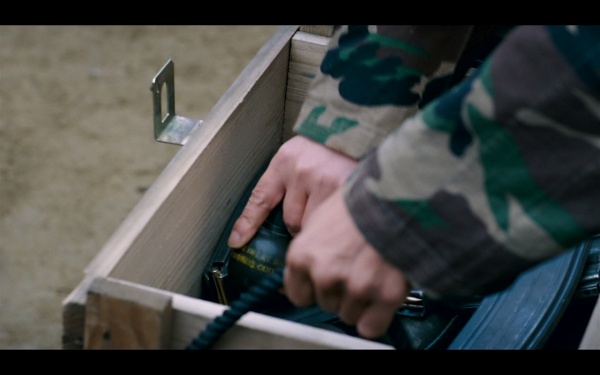 Ammunition and the K400 hand grenade being confiscated due to the mysterious happenings in GP506. 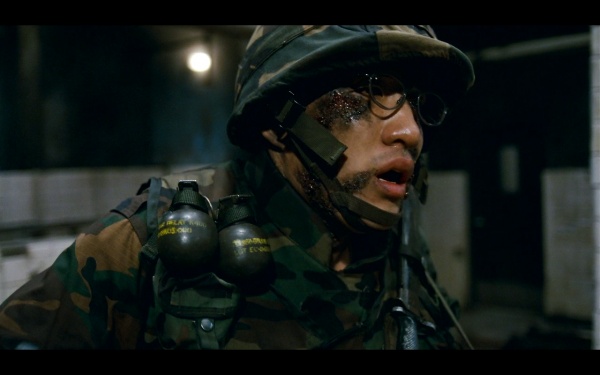 The K400 hand grenade equipped on a South Korean MP's shoulder. Note the "K400" markings in yellow, showing that it is a K400 and not an M67 hand grenade.

The 1/2 Pound TNT Block is shown at the end sequence with the K400 hand grenade being used as a booby trap. Noh setup the booby trap so no one would exit the GP506 alive, avoiding the spread of the infection. 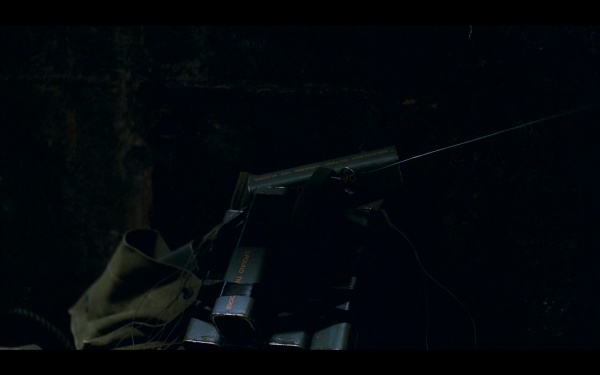 The 1/2 pound TNT blocks setup with a K400 hand grenade as a booby trap.
Retrieved from "http://www.imfdb.org/index.php?title=Guard_Post,_The&oldid=1308200"
Categories: