Granite Islands (a direct translation of original title Granitnye ostrova) is a Soviet 1976 made for TV adventure movie directed by Boris Durov and based on the novel by Yevgeni Voyevodin. A group of young soldiers of Soviet Border Guard start their service on the outpost on remote island.

The following weapons were used in the film Granite Islands (Granitnye ostrova):

Soviet Border Guards, notably Pvts. Konstantin Savin (Aleksandr Milokostyj), Vladimir Sokolov (Yuriy Nikolskiy), Erik Kergymaa (Juri Aarma), Leonid Basov (Andrey Romanov), Aleksandr Golovnya (Sergey Steblyuk), are armed with AKMs. Many have slant muzzle compensators removed, but the narrow front sights, gas tubes without vents and stamped receivers allow to identify them as AKMs rather than AK-47s. Versions with and without compenstators often switch to each other in same scenes due to continuity errors. 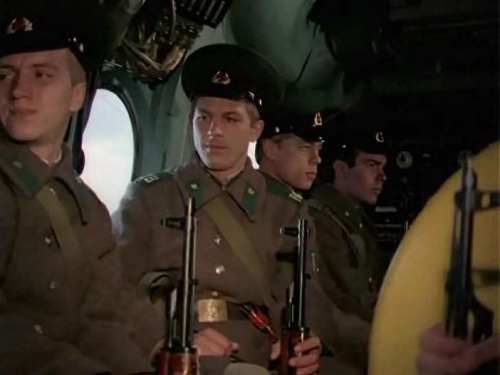 Soldiers in helicopter: Savin at the left and Kergymaa at the right hold standard AKMs while Sokolov in center has an AKM without muzzle compensator (narrow front sight and AKM gas tube allows to identifty his gun). Sokolov also carries a 6Kh3 bayonet in scabbard on his belt. 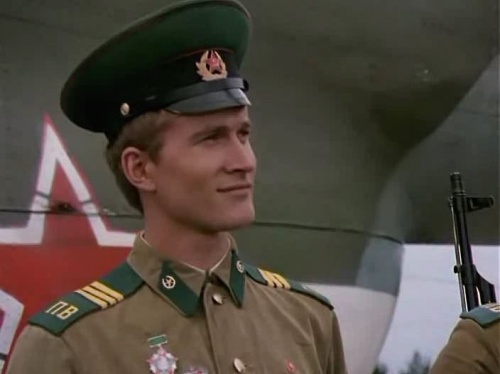 A barrel of AKM is seen at the right. 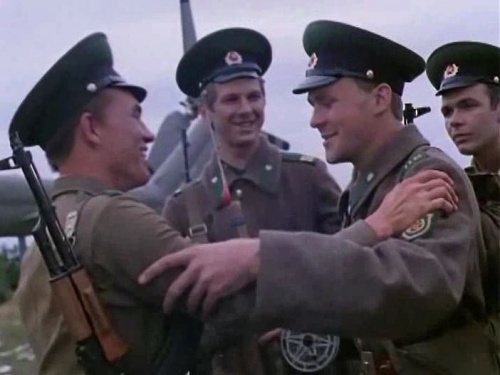 Soldiers with AKMs. Unlike the previous scene, Kergymaa carries an AKM without compensator while Sokolov (at the background) has a standard AKM. 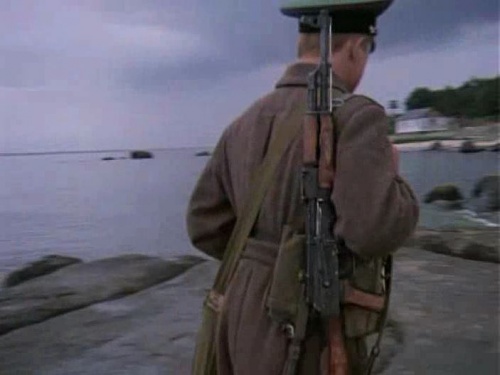 Basov carries an AKM without compensator. 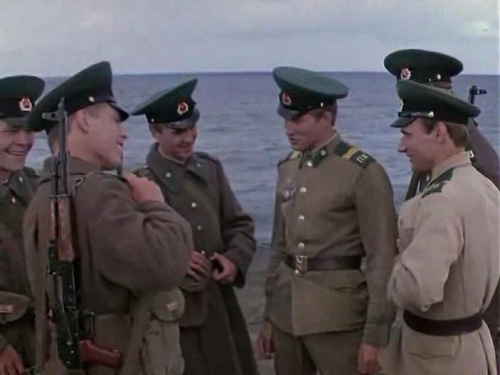 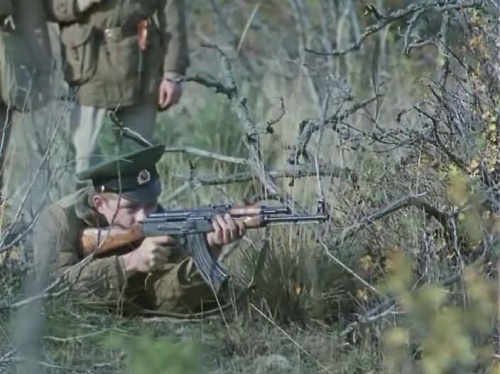 Basov fires an AKM without compensator during the training. A soldier at the background carries a 6Kh3 baynet on his belt. 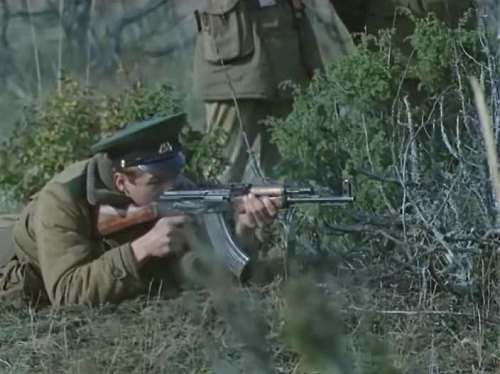 Sokolov fires an AKM without compensator during the training. 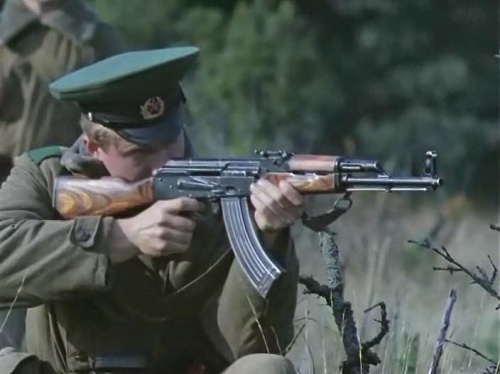 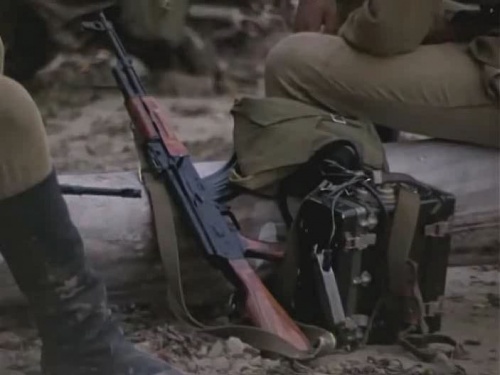 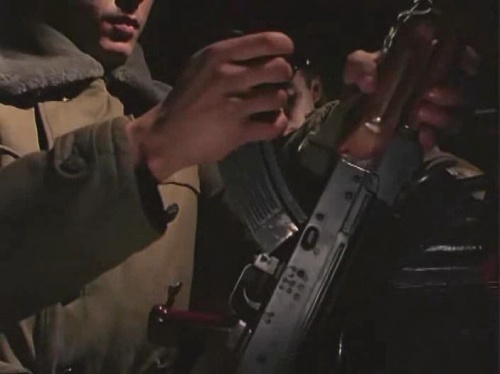 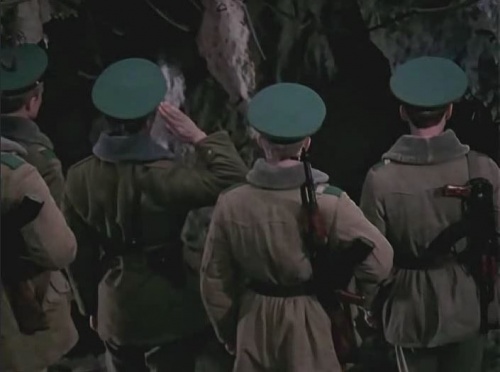 A Jr. Sgt. (Sergey Tarasov) carries an AKMS at the right. 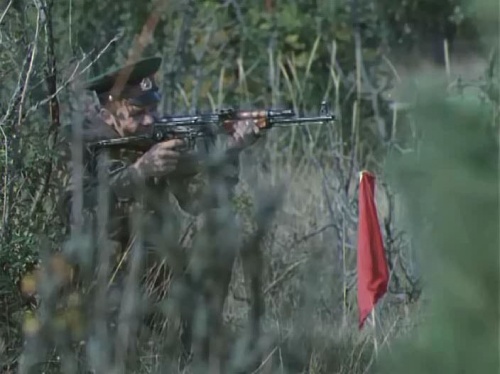 Aleksandr Golovnya (Sergey Steblyuk) fires an AKMS during the training. 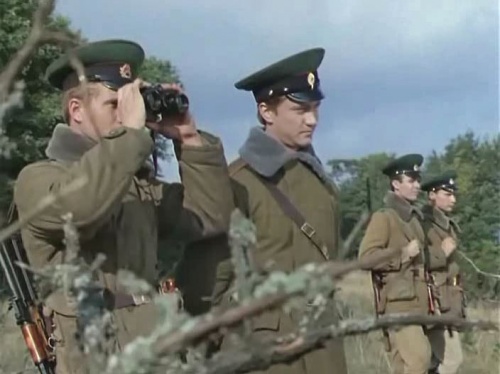 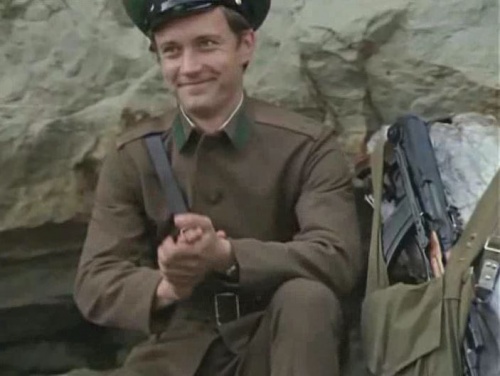 Syrtsov's AKMS is seen at the right. 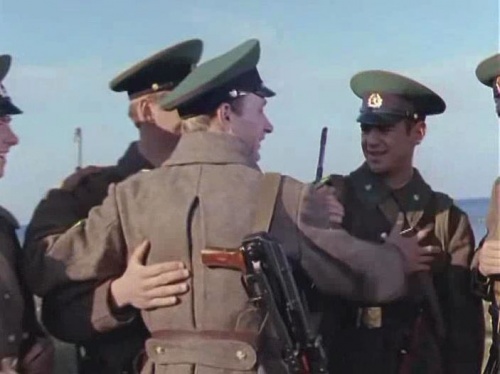 The commander of the outpost, unnamed Captain (Vladimir Safronov) and zampolit (the deputy for political affairs), equally unnamed Lieutenant (Yevgeni Gerasimov) carry Makarov PM holsters (no part of a pistol is seen). It's hard to say if these holsters contain pistols. 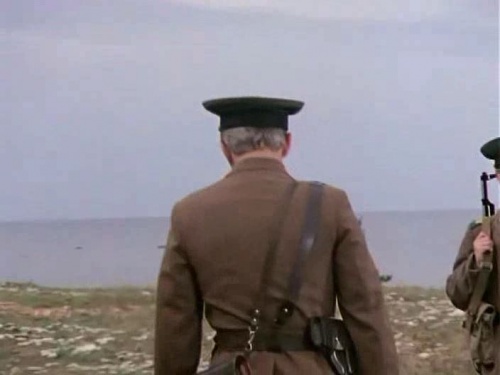 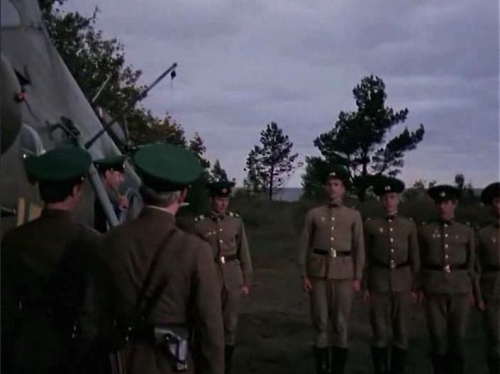 Another view of the Captain's holster. 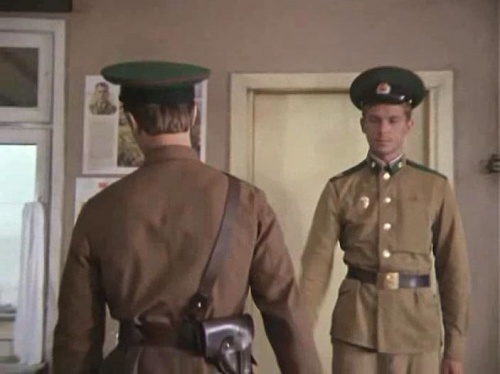