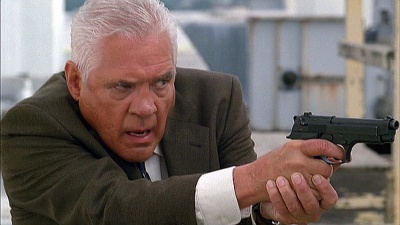 G.W. Bailey as Lt. Provenza with his Beretta 92FS in The Closer.

G.W. Bailey is an American actor best known to movie audiences for his role as Captain Thaddeus Harris in six of the seven Police Academy films. To television audiences, he is well known for his roles as Sgt. Luther Rizzo in the series M*A*S*H and Lt. Louie Provenza in the series The Closer and Major Crimes.