The Fate of the Furious (aka Fast & Furious 8) is the eighth installment in The Fast and the Furious film franchise. The 2017 sequel finds Dom (Vin Diesel) betraying his team and appearing to return to a life of crime while under the influence of a mysterious woman known as Cipher (Charlize Theron). The film was directed by F. Gary Gray, who is reunited with some of his cast from The Italian Job (Jason Statham and Theron) in addition to Diesel (whom he directed in 2003's A Man Apart). New cast members to the series include Helen Mirren and Scott Eastwood. 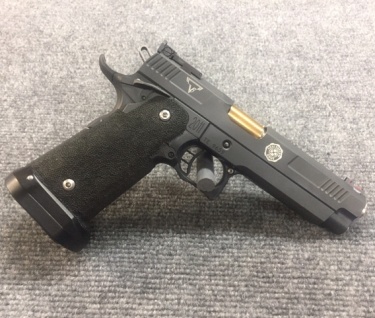 Tej Parker (Chris "Ludacris" Bridges) uses what appears to be an FN FNX-9 in the Russian naval base. 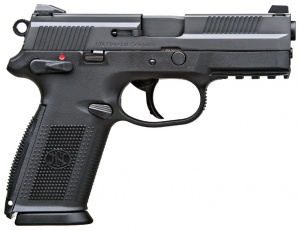 Tej (left) with his pistol. This particular shot is only from a trailer.

Cipher's henchman Connor Rhodes (Kristofer Hivju) briefly uses a suppressed Glock 17. Roman Pearce (Tyrese Gibson) uses a Glock 17 with stainless steel slide during the raid on the Russian naval base. He later picks up a standard Glock 17 from a Russian separatist and uses it to shoot the remaining ones on snowmobiles. The Glock 17 is also used by Cipher's henchmen in the airplane.

Cipher's henchmen with their Glock 17s.

The empty Glock is seen on the ground. 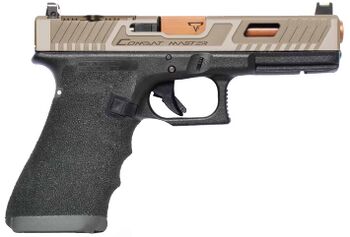 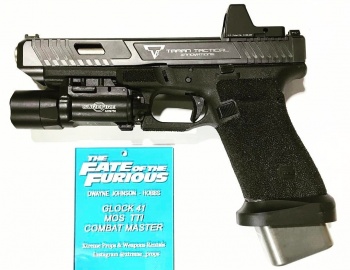 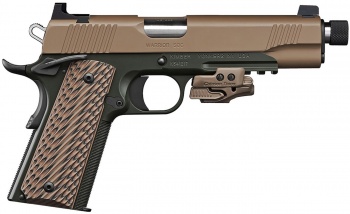 Dom aiming the Kimber at Cipher.

Rhodes holds his Kimber on Letty.

A closer look at the Kimber with its accessories

Cipher (Charlize Theron) uses what appears to be a Makarov PM in Mr. Nobody's headquarters.

Letty Ortiz (Michelle Rodriguez) carries a two-tone Ruger LC9s as her sidearm throughout the film. 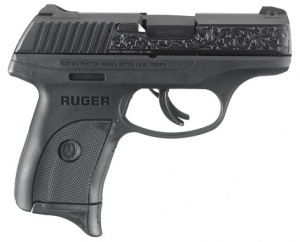 Little Nobody (Scott Eastwood) uses a two-tone SIG-Sauer P229R as his main sidearm in the film. According to Xtreme Props, the slide was taken off of a stainless P229 Elite and put on a black frame P229R. 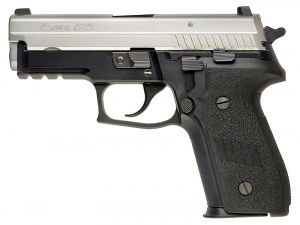 During the assault on Cipher's airplane, Deckard Shaw (Jason Statham) uses a highly customized Strayer Voigt Infinity with a butler cut and 23-round magazines. It is chambered in 9x19mm, apparently reinforced for using hot-loaded competition "Major" rounds. 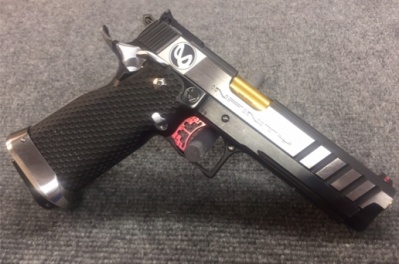 Shaw with his custom pistol, clearly showing the Infinity logo right above the grips.

Shaw reloading the Infinity. The reason why he's holding it this way is because he previously used it to pistol-whip two opponents when his magazine ran empty.

Laying down the empty Infinity. 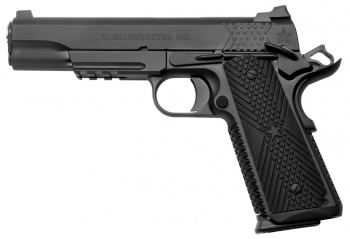 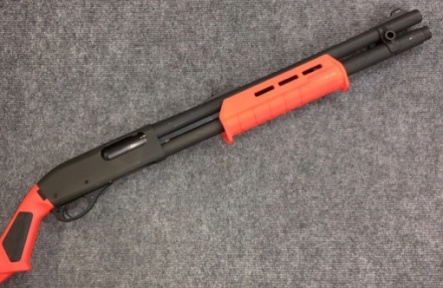 Another angle of the gun, but with the Magpul SGA stock not fully visible.

Hobbs about to fire at a guard after disarming this one.

German police carry Heckler & Koch MP5A2 submachine guns when responding to the raid in Berlin, although this is only seen in the trailer, not in the final movie.

One of the soldiers uses a Heckler & Koch MP5KN in Berlin. 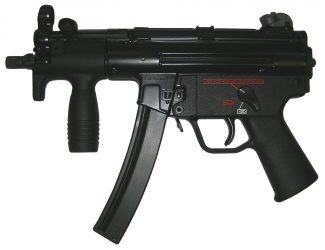 Most Russian separatists in the naval base use AKM rifles with Magpul PMAGs. Some of the rifles are fitted with Magpul MOE handguards, Magpul Zhukov buttstocks and AK-74 style muzzle brakes.

The AKM on the right is fitted with the aforementioned muzzle brake and Magpul parts.

The AKMSU is used by some of the Russian separatists pursuing the team.

One of the pursuers on snowmobiles uses what appears to be an AKS-74U.

The rifle in the air as the separatist gets shot.

BCM CQB-11 KMR-A10 carbines fitted with ACOG scopes and vertical foregrips are carried by some of Mr. Nobody's operatives. 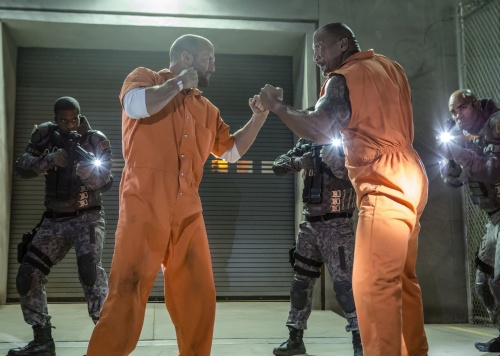 The operative on the left holds a BCM CQB-11 in a production still.

What appears to be a BCM Recce-14 KMR-A13 is used by one of Mr. Nobody's operatives.

The operative on the right with his BCM Recce-14.

The M4 behind an incapacitated Deckard.

Leo and Santos removing their balaclavas. 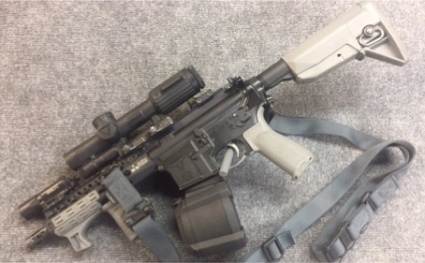 TTI BCM TR-1 SBR, converted to full-auto - 5.56x45mm. This is the actual screen gun used by Michelle Rodriguez in the movie. Image courtesy of Xtreme Props.

One of the Russian separatists uses a Zastava M70AB2 at the entrance of the naval base.

A gunman firing the Zastava M92 at Roman. Note: this shot is mirrored.

The same gunman firing the Zastava M92 as Roman is about to knock him out with a car door. 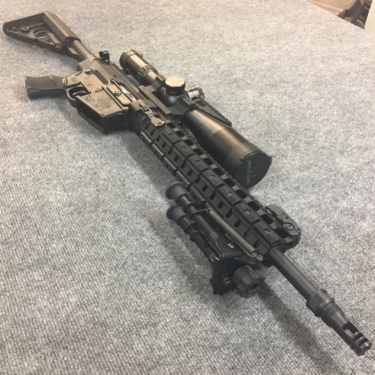 Rhodes takes aim with his PredatOBR. Note that the bolt is not in battery.

Dom grabs the rifle from Rhodes.

The Ripsaw MS2 tank driven by Tej (Chris "Ludacris" Bridges) has a remotely-operated Browning M2 Aircraft mounted via an M153 CROWS system. The weapons seems to have been mocked up to resemble an FN GAU-21, though the rear buffer is one of the elements that give away its identification as an M2. It has a harpoon gun mounted on it.

Note how this shot is actually flipped...

...while the next shot shows the correct view of the weapon.

One of the vehicles guarding the Russian official in New York is armed with an M134 Minigun. It is affixed to a collapsible mount that unfolds from the vehicle's sunroof, similarly to the shortened M134 used by Reyes' henchmen at the end of Fast Five.

Luke Hobbs (Dwayne Johnson) uses an M249 SAW fitted with a Trijicon MRO red dot sight during the raid on the Russian naval base.

PKM machine guns are mounted at the entrance of the naval base.

Two PKM machine guns are seen on a tower.

A helicopter in the Russian naval base is fitted with an unidentified autocannon.

When infiltrating Mr. Nobody's headquarters, Dominic Toretto (Vin Diesel) and Cipher (Charlize Theron) use a pair of devices that launch projectiles, which Cipher describes as next-generation concussion grenades that scramble one's senses and wear off after an hour.

Hobbs grabbing one of the grenades and throwing it away before it explodes. This particular shot is only from a trailer.

Dominic Toretto (Vin Diesel) uses an explosive charge to blow up a door inside the headquarters. The charge itself is only visible in a trailer, not in the final movie.

Dom placing the charge on the door.

The weapons seen here are a Beretta 92FS Inox with wood grips, a two-tone SIG-Sauer P229 Elite, a SIG-Sauer P232, a Walther PPK/S, an FN P90 TR with optic fitted, a CZ Scorpion Evo 3 S1 Pistol, a nickel-plated CZ 75B and a Kimber Warrior).

An Arsenal Firearms Strike One is seen, squared in red, along with a Wilson Combat BCM Gunfighter 1911 on its right. A two-tone FN FNX-9 and a Kimber Solo Carry were also used, albeit not visible here.