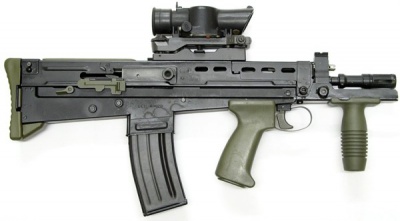 In 1989 Enfield speculatively produced a shortened variant of the SA80 for potential use by vehcile crews and other troops not requiring a full length rifle. Contrary to internet lore these were not built from surplus L86A1s, as shown by the lack of the LSW bipod outrigger holes in the receiver, and are instead built from standard L85A1 receivers. This confusion possibly comes from the fact that the vertical grip is the same as the rear grip from an LSW. The weapon proved very unreliable (moreso even than standard A1 SA80s) due to issues with shortening the gas system that were never fully resolved.

The SA80 AFV prototype was not made for a specific MOD requirement and saw little, if any, official testing by British forces. Supposedly a small batch was produced for trialls by an unspecified middle eastern country, however these weapons were destroyed in a warehouse fire. The only surviving examples of this weapon bear commercial Enfield markings rather than British military markings giving some credence to this story.

With the introduction of the L22A2 this weapon has been been retroactively referred to as the L22A1 (even in Ministry of Defence documentation) and is often referred to as such - however this is incorrect as it was never close to adoption and being given an official 'L' designation, being known only as an SA80 AFV or Armoured Fighting Vehicle.

In 2003 Heckler & Koch began production of a carbine variant of the SA80 known as the L22A2 which was intended for use as a personal defense weapon by helicopter aircrew and armoured vehicle crews. They have also been issued on occasion to troops not requiring a full size rifle, such as drivers, dog handlers and combat cameramen, as well as Royal Navy and Royal Marine boarding parties. In form it is very similar to the failed 1989 AFV prototype, however H&K have solved the reliability issues caused by the shortening of the gas system. H&K also produced a new 20 round magazine that doesn't protrude past the grip of the L22A2 allowing it to be more conveniently stowed in racks inside various vehicles.

The designation of this carbine is a subject of some confusion, with the argument being made that it cannot be an A2 as despite the fact that it has the "A2" upgrades it is the first weapon to receive the L22 designation so it should logically be the L22A1. However, the right side of the magazine well is marked "L22 A2 5.56 x 45", it has an "A2" stamp on the top of the receiver, and is referred to as the L22A2 in official Ministry of Defence documentation, with the earlier prototype sometimes being retroactively referred to as the L22A1.

As with the AFV prototype, it is often stated that these weapons were made from surplus LSWs, and again this can be seen to be untrue from the fact that there are no mounting holes for the LSW outrigger on the receiver. Instead, these appear to have been made from surplus L85A1s that were not yet converted to the A2 standard.

A semi-automatic only version of the L85 used for weapons training.

L98A2 Cadet General Purpose (GP) Rifle - 5.56x45mm NATO. It is virtually identical to the L85A2 rifle save for the absence of fully automatic capability and a plain foresight blade without a tritium insert.