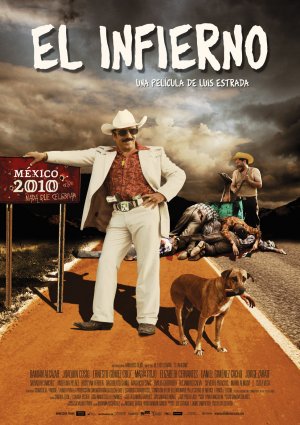 The following weapons were used in the film El Infierno:

A man who robs Benny García (Damián Alcázar) on a bus wields a Beretta 92FS. One is also used by a Cartel Member with pearl grips. Benny later gets one with pearl grips when he begins working for Don José Reyes (Ernesto Gómez Cruz). Benny's nephew Benjamín (Kristian Ferrer) later gets one after joining the Panchos. A Beretta is also seen as part of the selection during the arms deal. 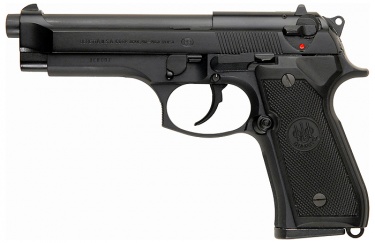 The robber with a Beretta 92FS.

A Cartel member draws his Beretta on Benny García (Damián Alcázar) for talking to his girl Lupe (Elizabeth Cervantes). She ends up going for him anyway.

A look at the pearl grip of Benny's Beretta.

During his rise through the ranks of the Cartel, Benny stops for a moment to get his Beretta baptized.

A Beretta 92FS in far left row third from the top.

Benjamín (Kristian Ferrer) practices shooting on some nearby chickens.

A Panchos Cartel member with a Beretta 92FS.

A dead Mexican policeman with his Beretta 92 still in his holster. 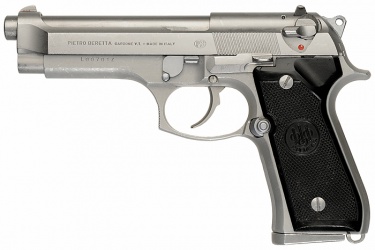 Benny García's brother is seen with a Colt M1911A1 in a photo. A rival Cartel gunman is later seen with a stainless one. A Mexican policeman uses one during Benny's and Cochiloco's arrest. Don José Reyes (Ernesto Gómez Cruz) briefly switches to a golden 1911 with a threaded barrel during a meeting. Nickel and gold 1911s are part of the selection during the arms deal. 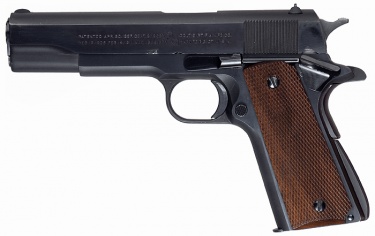 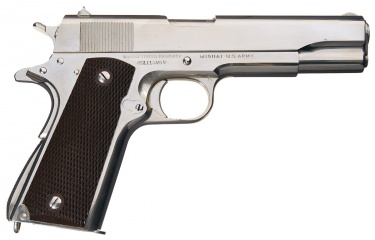 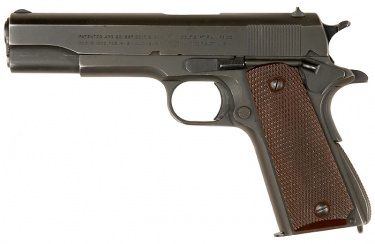 A Panchos Cartel gunman surrenders with his M1911A1 still in his hand.

A Mexican policeman with an M1911.

Don José Reyes with a 1911. Due to the lighting the golden finish is not very visible.

A 3rd Generation Glock 17 is seen during the arms deal. 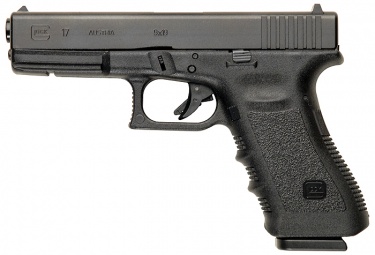 A 3rd Generation Glock 17 on top of the far left row.

Cochiloco (Joaquín Cosio) jokingly pulls a nickel Smith & Wesson Model 27 with pearl grips on Benny García after calling Cochiloco by his old name. He later switches to a blued model for the rest of the film. 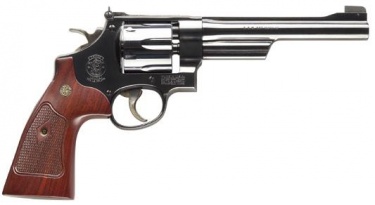 A Cartel member is seen with an unknown shotgun during a drug deal.

A Cartel gunman is seen with an IMI Uzi during an ambush.

A Cartel gunman on the left with an IMI Uzi.

Mexican soldiers and SWAT are seen with what appears to be airsoft M16 rifles. M16s are also seen as part of the selection during the arms deal.

Mexican soldiers check the passengers for drugs at a check point.

A SWAT officer with an airsoft M16.

A Cartel Gunman fleeing a crime scene uses an unknown AKM variant. The Gunman's target and members of Benny García's family are also seen with them. Cochiloco (Joaquín Cosio) examines an AKM during an arms deal. He later uses it during an ambush. A Cartel member also uses one during the capture of Don Rogaciano (Salvador Sánchez).

A Cartel Gunman with an AKM.

Family photos showing off the AKs.

Cochiloco (Joaquín Cosio) with an AKM.

Cochiloco firing his AKM during an ambush.

Note the stovepiped round.

A Cartel member with an AKM.

Benny uses an AKMS with the folding stock removed to tie up one last loose end.

Benny with an AKMS.

A Panchos Cartel gunman with a Colt M4A1.

An M72 LAW is part of the selection of the arms deal.

Cochiloco (Joaquín Cosio) keeps a Mk 2 hand grenade in the glove compartment in his truck. Mk 2 Hand Grenades are part of the selection during the arms deal.

Many weapons are seen during an arms deal.