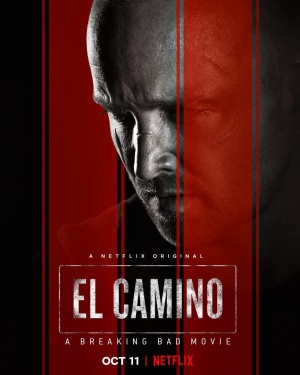 El Camino: A Breaking Bad Movie is the 2019 Netflix original film set in the universe of the series Breaking Bad. The film follows Jesse Pinkman (Aaron Paul) on the run following the events seen in the finale of the series. Many characters from Breaking Bad return for this film, which was written and directed by Breaking Bad creator Vince Gilligan, and also features the one of the final starring roles for actor Robert Forster.

The following weapons were used in the film El Camino: A Breaking Bad Movie:

A Kimber Ultra Raptor II is seen pulled on Jesse Pinkman (Aaron Paul). This pistol appears to be a "Custom Shop" model. Kenny carries the same model in Season 5. 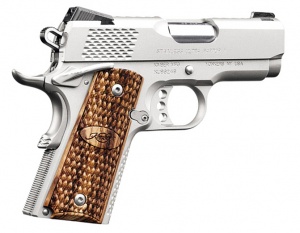 A Kimber Ultra Raptor II is seen pulled on Jesse Pinkman (Aaron Paul). This pistol appears to be a "Custom Shop" model.

The Kimber Ultra Raptor II is handled by Jesse.

What appears to be a third generation Glock 17 is seen used by several characters, including Jesse Pinkman (Aaron Paul).

Jesse holds the Glock in his left hand.

Jesse with the Ruger and the Glock.

What appears to be a stainless Ruger KP89 is seen in the glovebox of Todd's car. Jesse Pinkman (Aaron Paul) is seen holding the pistol. The appearance of this pistol represents a continuity error with Season 5, in which Todd carried a Ruger KP95. It appears to to be the DC variant.

The P89 is pointed by Jesse.

Jesse handles the Ruger in the right hand along with a Glock 17 in his left. Notice no safety cut on the back meaning it’s a de-cocker (DC) only model.

Jesse with the Ruger.

The Ruger sits in the shower window. A higher quality screenshot will reveal a "9mmx19" stamp on the barrel as well as a "Terhune Anticorro" stamp on the slide, which appeared on some P-Series guns.

Jesse Pinkman (Aaron Paul) gets his hands on a pre-war Colt Woodsman Sport from his parents' house. He later uses it during a showdown, where it is correctly referred to as a .22. 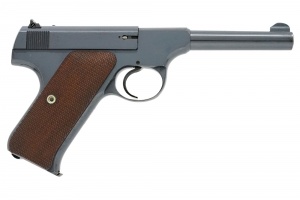 Jesse looking at his Woodsman.

Like the Colt Woodsman, Jesse Pinkman (Aaron Paul) gets a H&R Bicycle Hammerless Model revolver with a 2 inch barrel from his parents' house 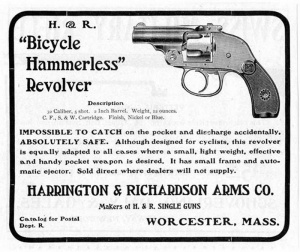 Jesse with the H&R revolver in his hand