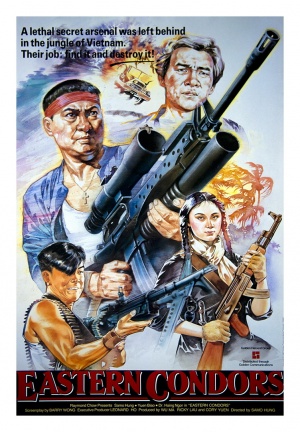 Eastern Condors is a 1987 Hong Kong martial arts action film directed by and starring Sammo Hung. Set after the end of the Vietnam War, the film follows a team comprised of Chinese American military convicts who are recruited by the US military to destroy an American weapons bunker in Vietnam before the enemy can capture it.

The following weapons were used in the film Eastern Condors:

The pistol is fired by Tung.

What appears to be a Smith & Wesson Model 36 is used to play Russian roulette. It's possible that this is a clone.

A young soldier holds the revolver.

The revolver seen on the table.

The revolver put to the head of Lung Yeung (Haing S. Ngor).

A full size Uzi is seen in the hands of Rat Chieh (Yuen Biao) and Lieutenant Colonel Lam (Lam Ching-ying).

A full size Uzi is seen in the hands of Lieutenant Colonel Lam (Lam Ching-ying).

The Uzi is held by Rat Chieh (Yuen Biao).

On the right, the Trench Gun is carried by Chin.

Rifles seen at the top and left.

Both Yun Yen-hoy (Yuen Woo-ping) and Wu (Corey Yuen) carry the rifles while on the left, the rifle carried by Ching Dai-Hao (Billy Lau) is fitted with an M203 grenade launcher.

Norinco Type 56 rifles are used throughout the film.

The rifles are carried by the guerilla girls.

The rifle seen on the side.

Also uses is what appears to be a Colt AR-15 Sporter Carbine.

The M60 machine gun is mounted on a various Vietcong boats and vehicles.

An NVA soldier opens fire with the M60.

The Guerilla Girl Leader opens fire with the M60.

Vietcong soldiers use the Browning M2HB at the bridge along with M60 machine guns.

The M203 is seen being loaded.

Vietcong soldiers are seen readying an M101 Howitzer to use against Lieutenant Colonel Lam's team.