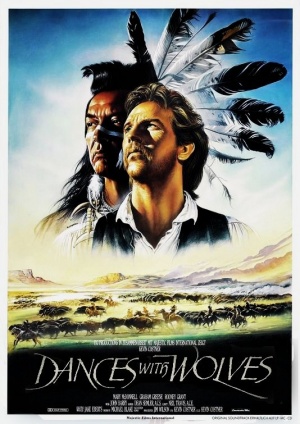 Dances with Wolves is the 1990 historical drama directed by and starring Kevin Costner as John J. Dunbar, a US Army lieutenant who after the end of the Civil War is assigned to a distant outpost in the undiscovered West. After finding the outpost abandoned, Dunbar befriends the Sioux tribes in the land and soon learns about their ways. The film would subsequently be nominated for twelve Academy Awards and would receive seven, including the Awards for Best Picture and Best Director for Costner (in his directorial debut). All the guns in this film were supplied by Aldo Uberti Inc. of Italy.

The following weapons were used in the film Dances With Wolves:

Lt. John J. Dunbar (Kevin Costner) keeps a Colt 1851 Navy as his sidearm throughout the film. It is actually converted to fire metallic cartridges which is safer then using blanks on a percussion revolver. Also seen in the hands of some high ranking Union officers. After a conversation with Dunbar, Major Fambrough (Maury Chaykin) puts a Colt 1851 Navy revolver to his head. Also John Dunbar's revolver could be considered as slightly anachronistic due to its model type. This particular revolver was built in London, England due to its appearance being a steel frame with black iron backstrap and black steel barrel. As only around 2,000 units were produced at the London Colt factory, it is highly unlikely that John would come by one.

Lt. John Dunbar (Kevin Costner) points his Colt 1851 Navy at Timmons (Robert Pastorelli) when he refuses to help him unload his stuff.

Dunbar points his 1851 Navy at Wind in His Hair (Rodney A. Grant) when he confronts him.

Dunbar fires his 1851 Navy at the attacking Pawnees, although Costner fakes the recoil a little too much.

Dunbar struggles to shoot a Pawnee with his 1851 Navy when he attacks him. It can be seen that the cylinder is one that houses metallic cartridges, but the rest of the revolver is untouched, to make the Colt look like a genuine Colt 1851 Navy from the Civil War period. Also can be seen the black iron backstrap and steel frame, indicating it to be a London produced Colt Navy

Dunbar fires his 1851 Navy at the Pawnees while on horseback. He then tosses it away when empty.

A Confederate soldier on the far right with the brass frame revolver.

Both Union and Confederate soldiers are seen with Remington 1858 New Army revolvers.

A Confederate cavalryman armed with a Remington 1858 New Army.

Edwards (Kirk Baltz) runs while armed with the revolver

Sergeant Major Bauer (Larry Joshua) armed with a Remington 1858. Later, in an apparent continuity error, it switches to a Colt 1860 Army.

Several soldiers of the US Cavalry are seen armed with Colt 1860 Army revolvers as their sidearms. In what appears to be a continuity error, Sergeant Major Bauer (Larry Joshua) is seen trying to use a Colt Army revolver instead of the Remington he was holding earlier.

Spivey (Tony Pierce) fires his Colt 1860 Army at Two Socks. Based on the divots in the cylinder this appears to be a zinc replica.

During a confrontation with Smiles A Lot (Nathan Lee Chasing His Horse), Sergeant Major Bauer (Larry Joshua) tries to use the Colt 1860 Army, but the powder appears to be too wet from him crawling in the river. It changed from a Remington 1858 revolver, which he was actually seen crawling through the river with.

Bauer with the revolver, now clearly not the Remington he had been holding earlier.

Lt. John J. Dunbar (Kevin Costner) keeps a polished brass frame Henry 1860, or as the Rebels called it, "That damned Yankee rifle you load on Sunday and shoot all week", as his rifle of choice throughout the film.

Dunbar looks over at his Henry 1860 when the Sioux confront him.

During the buffalo hunt, Dunbar fires his Henry while on horseback.

Dunbar fires his Henry rifle at the charging Buffalo.

Dunbar racks the lever on his Henry rifle.

Stands With a Fist fires Dunbar's Henry rifle at an attacking Pawnee.

A Confederate soldier fires his Springfield 1864, noticeable from its hammer, much like the Enfield's, although for some reason is missing all its barrel bands (front). Also, Enfield 1853 rifles are being fired at Dunbar while he attempts a suicide run.

Union soldiers march, all of them armed with Springfield 1861 rifles.

During the film's beginning, Sgt. Pepper (Tom Everett) can be seen loading an Enfield 1853, not a Springfield 1861 as previously thought.

The rifle can be determined due to two factors: the shape of the ramrod end, being cylindrical in shape with a square hole punched through it for a jag cleaning cloth, unlike a more bulbous plain ramrod of the Springfield 1861, and because of the shape of the barrel bands being a more rounded shape from being cast, much unlike the barrel bands of a Springfield 1861 which are produced by being pressed and stamped. When the sergeant loads his Enfield, it appears that he forgets to load a Minie ball before preparing to ram the powder down the barrel.

Sgt. Pepper (Tom Everett) loads the powder into his Enfield 1853. Note the shape of the ramrod end. It's also interesting that he's preparing to use the ramrod despite the fact that he hasn't loaded a .58cal Minie ball in with the powder.

Confederate soldiers fire their Springfield 1861 and Enfield 1853 rifles at Dunbar when he attempts a suicide run.

A Confederate soldier aims his Enfield 1853 at Dunbar.

To prepare for the attacking Pawnee Indians, Dunbar gives the Sioux Indians Sharps rifles, which based on the time are the 1863 models.

A Sioux elder fires what appears to be a Sharps 1863.

Dunbar is seen arming many of the Sioux with the Sharps Saddle Ring carbine, also appearing to be the 1863 model. These models are later seen in the hands of the US Cavalry, notably when they takes shots at Dunbar's pet wolf, Two Socks.

Several of the Sioux open fire on the fiercest Pawnee (Wes Studi). In reality, several probably would have been shot by the ensuing fire.

Spivey (Tony Pierce) smiles as he holds his Sharps.

The Double Barreled Percussion Shotgun is first seen in the hands of Confederate soldiers at the beginning of the film. Timmons (Robert Pastorelli) keeps one at his side while driving Dunbar in his coach. After Timmons is murdered by Pawnee one of the warriors takes his shotgun. These shotguns are noted as muzzle loaders based on the ramrod underslung under the barrels.

A Confederate soldier in the center is seen armed with a double barreled muzzle loading shotgun.

Timmons keeps a muzzleloading shotgun at his side on his coach.
Retrieved from "http://www.imfdb.org/index.php?title=Dances_With_Wolves&oldid=1258231"
Categories: