Companeros (original title Vamos a matar, compañeros) is a 1970 Italian-German-Spanish spaghetti western directed by Sergio Corbucci and starring Franco Nero and Tomas Milian. The story takes place during the Mexican Revolution. Swedish arms dealer Yodlaf Peterson (Franco Nero) sells weapons to guerilla leader Gen. Mongo (José Bódalo), but the money that Mongo needs for the deal are locked in an indestructible bank safe. The only man who knows the combination is Prof. Xantos (Fernando Rey) who is held in prison in the American town of Yuma. Peterson volunteers to rescue Xantos and bring him to Mongo who orders one of his men, El Vasco (Tomas Milian), to escort Petersen. The events are even more complicated after the involvement of a group of Xantos' loyal followers ("Xantists"), lead by Lola (Iris Berben). Meanwhile, Petersen's old companion John (Jack Palance), turned bitter enemy, searches for him.

The following weapons were used in the film Companeros:

Single Action Army revolvers are used by numerous characters. Both "Artillery" and "Cavalry" models can be seen. The revolvers appear to be Italian-manufactured replicas, as in most Spaghetti Westerns.

Several guerrillas hold SAA revolvers. The one on the foreground appears to be nickel plated.

A close view of Artillery SAA during the climactic battle.

El Vasco with a revolver and a bloodstained machete.

Peterson (Franco Nero) in ambush with a Cavalry revolver.

A Xantist holds a revolver.

In the final scene, Peterson discharges his revolver, leaving only a single cartridge. It's worth noting that the cartridge looks significantly longer and thinner than an original .45 Long Colt.

El Vasco threatens a dealer in gambling house in Yuma.

Lola carries an M&P revolver, tucked at her belt.

Gen. Mongo uses an M&P as a backup gun.

During the encounter on the train, one of Xantists is armed with a revolver that looks mostly like a Smith & Wesson .44 Double Action or one of its numerous Spanish copies. The revolver has an unusual feature, a side-mounted ejector rod that is uncommon for top-break revolvers. This ejector rod may be purely a mockup, added to make the revolver look more "Western-style". In the final scene, El Vasco (Tomas Milian) also carries a similar revolver. 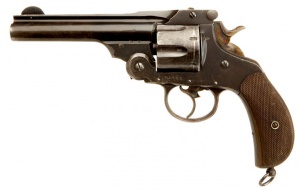 A Xantist aims his revolver at El Vasco.

El Vasco draws his revolver in the final scene.

He opens and discharges the revolver.

A compact nickel plated revolver is carried by Yodlaf Peterson (Franco Nero) in several scenes. It looks similar to a Colt New Pocket except for a more vertical front end of the frame; such simplification may be a sign of a Spanish produced version of a Colt revolver. 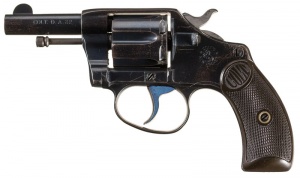 Colt New Pocket - .32 Colt. The screen gun has a slightly different shape of the frame.

Peterson opens his revolver and rotates the cylinder.

He readies the revolver.

Peterson draws the revolver when Lola and her friends enter the room.

A Campo Giro pistol is another of Yodlaf Peterson's (Franco Nero) handguns. During the encounter on the train, it is taken from Peterson by a young Xantist. 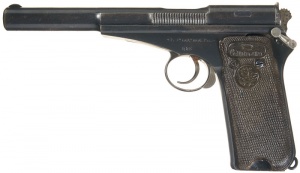 A Campo Giro in its holster.

Peterson with a Campo Giro and El Vasko with a revolver in a Mexican (really Mexican!) standoff.

A man next to Lola holds an SAA revolver and Petersen's pistol.

During the scene on the train, Lola (Iris Berben) wields a pair of double barreled pistols. They appear to be large caliber breechloading (may be pinfire, rimfire or centerfire) hunting pistols, some distant cousin of the Howdah Pistol.

...and draws the guns. Note the lever under the barrel that allows to identify these pistols as breechloading.

A closer view of the pistols.

Mexican government soldiers and some guerrillas are armed with 1893 Spanish Mauser rifles. In the scene in Yuma, US Army soldiers also are armed with M1893 rifles, standing in for proper M1903 Springfields.

A soldier holds his rifle in the opening scene.

A firing squad. Straight bolt handle can be seen at the left.

A guerrilla fighter holds a Mauser, taken from a slain soldier.

An American soldier in Fort Yuma holds his rifle.

Another soldier carries a rifle on a sling.

Mexican soldiers march with their rifles on their shoulders.

A closer view of the rifle in the hands of a Xantist.

Most guerrillas carry lever-action rifles that appear to be Garate El Tigre rifles, a Spanish copy of the Winchester Model 1892.

A rifle is hung on a pole.

Peterson reloads his rifle during the climactic battle.

In one scene, a Xantist carries a long gun that appears to be a Remington Rolling Block.

A man at the left holds what appears to be a Remington Rolling Block.

John rests with a shotgun in hand.

John holds his shotgun in the ambush from the belfry.

Top-break single barreled shotguns are seen in the hands of Mongo's guerrillas and Xantists. In the final scene, Xantos (Fernando Rey) himself holds a shotgun.

A Xantist in a straw hat holds a shotgun.

Mongo's man fires a shotgun at the background.

Several Maxim 1895 machine guns are seen in Peterson's boxcar. During the shootout on the road block, a Maxim on a tripod is seen; when Peterson takes it, it switches to a multi-barreled mitrailleuse (see below). 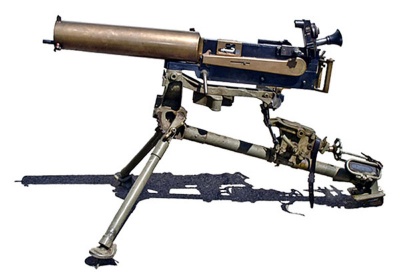 Three Maxims and several tripod mountings are seen inside the boxcar.

A Maxim is seen at the background in the scene on the road block.

General Mongo's men attempt to break the safe using a Maxim that appears to be a mockup as it is operated in a very strange way. Later on in the climatic battle, Peterson takes the gun and uses it against Mongo's men as hand-held gun. There is a possibility that this prop is made around a submachine gun, like the Star Z45, widely available in Spain.

Guerrillas fire a Maxim in an attempt to open the safe.

Later in this scene, a mitrailleuse switches back to a Maxim. Here, Peterson tries to fix a malfunction.

Peterson in action in the climactic battle.

Another view of the same scene. Note that protrusion at the bottom of the gun, just before the water jacket, that looks a lot like a 9mm submachine gun magazine. The side-mounted handle that Peterson holds may be in reality a lever linked to the trigger of the gun inside the Maxim shell.

A Bergmann MG 15 is seen at the right.

An iconic Spaghetti Western gun, a multi-barreled, belt-fed mitrailleuse-style machine gun, appears in the scene at the road block. Yodlaf Peterson (Franco Nero) dismounts it from a tripod (in a previous moment, the gun is a Maxim machine gun) and mows down Mexican government soldiers. This movie prop looks very similar to the one seen in A Fistful of Dollars and different from the one held by Nero in Django. 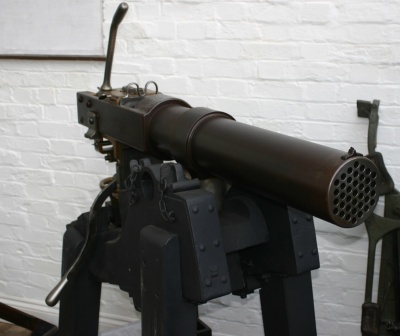 Peterson grapples with the gun.

A closer view of the barrel. The number and position of holes look the same as in A Fistful of Dollars.