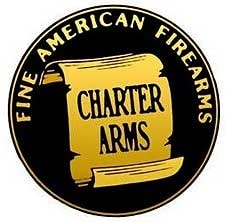 Douglas McClennahan, a young gun designer who founded Charter Arms in 1964, had previous revolver experience after working for Colt, High Standard, and Sturm-Ruger. In 1967, McClennahan's lifelong friend, David Ecker, became a 50/50 partner in Charter Arms. Charter Arms revolvers are interesting because the lockwork is something of a combination of Ruger, Smith & Wesson and Colt technology. Charter Arms is also the only company to make a revolver chambered for rimless cartridges that does not require moon clips, as well as the only company to make a production model left-handed revolver (the Southpaw). Charter Arms revolvers do not use a side plate, which creates a stronger frame, and they do not use a traditional crane arm, as it locks inside the frame to create a stronger action. Charter Arms revolvers also come from the factory in a variety of colors. The average Charter Arms revolver is twenty-five percent smaller and lighter than other revolvers, and the Ultralites are half the weight of other revolvers. Charter Arms revolvers are known for being affordable and high-quality, and are built by the Ecker family in Shelton, Connecticut, located in New England's Gun Valley. They are completely American-made, with most of their part suppliers being less than an hour's drive away. Charter Arms has produced many different handguns chambered in .22 Long Rifle, .22 Winchester Magnum, .32 Long, .32 H&R Magnum, .327 Federal Magnum, .357 Magnum, .38 Special, .41 Remington Magnum, .44 Special, and .45 Colt. The most famous revolvers manufactured by Charter Arms are the .44 Special Bulldog and .38 Special Bulldog Pug.