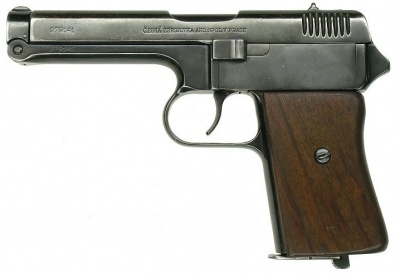 The CZ 38 was developed for the Czech army and was made from 1939 to 1945. Chambered in 9×17mm Browning Short (.380 ACP) it is a Double-Action-Only (DAO) pistol. When the contract was fulfilled, the Germans occupied Czechoslovakia and the pistols went to the Wehrmacht without proofing. The barrel is attached to the frame by a hinge, allowing for easy disassembly. The design was not necessarily very popular, but the construction to dismount is notable. It seems that the tilting barrel was sometimes known as "self"-dismounting when pulled out of the holster.