Bone Tomahawk is a 2015 Horror-Western directed by S. Craig Zahler (Dragged Across Concrete) and stars Kurt Russell as Sheriff Franklin Hunt, Patrick Wilson as Arthur O'Dwyer, Richard Jenkins as Chicory, and Matthew Fox as John Brooder. Of particular interest for Western enthusiasts is the fact that Peter Sherayko (who provided weapons for Russell's 1993 film Tombstone) was brought on as armorer and producer for this film.

The following weapons were used in the film Bone Tomahawk:

Brooder holds the revolver in his left hand.

Buddy (Sid Haig) and Purvis (David Arquette) both carry Remington 1890 pistols in the opening of the film, distinguishable by the lanyard rings on the butts and the grip shape (distinct from Colts). 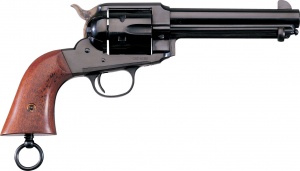 Buddy with his Remington cocked. 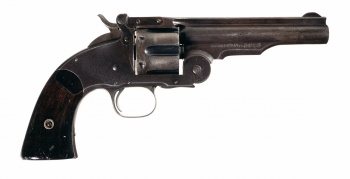 Hunt with his Schofield approaching the barn.

Hunt with his Schofield approaching the sheriff's office.

Hunt with his Schofield investigating the sheriff's office.

Hunt with his nickel Schofield.

Hunt with his nickel Schofield.

Arthur O'Dwyer (Patrick Wilson) uses a Merwin, Hulbert & Co. First Model Frontier Army throughout the movie. It is differentiated from other later models by the lack of a top strap. It is nickel plated. Rare to see these in movies, and even more rare to see one reloaded in a movie, which O'Dwyer does towards the end!

O'Dwyer with his Merwin & Hulbert. Best view I could find of the gun.

O'Dwyer with his Merwin & Hulbert in his holster. This version has the earlier "square butt" rather than the "skull-crusher."

O'Dwyer with his Merwin & Hulbert, visible in its holster at the bottom of the frame.

O'Dwyer with his Merwin & Hulbert. Oddly, in this screen cap it looks like it has a top strap over the cylinder and looks blued rather than nickel. Maybe a different gun used for the shot, or simply a trick of the lighting.

O'Dwyer reloading his Merwin & Hulbert. The static screen cap doesn't do it justice; it's the only time I've seen one of these reloaded in a film. Pretty cool.

John Brooder (Matthew Fox) carries a very distinct engraved and nickel-plated Winchester Model 1873 carbine in the film. It is another choice that I am sure was influenced by Peter Sherayko. Very unique version of the gun, very fitting of Brooder's high-falutin' character.

Brooder's 1873 Winchester on the ground.

Sheriff Hunt also carries what appears to be a Winchester Model 1892 carbine while they are out tracking. Since the film takes place in the 1890s (at least, according to the tombstones seen earlier), this is one of the rare instances of the appropriate use of an 1892. It is never fired.

Chicory with his shotgun over his shoulder.

Chicory fires his shotgun from the hip.
Retrieved from "http://www.imfdb.org/index.php?title=Bone_Tomahawk&oldid=1475744"
Categories: